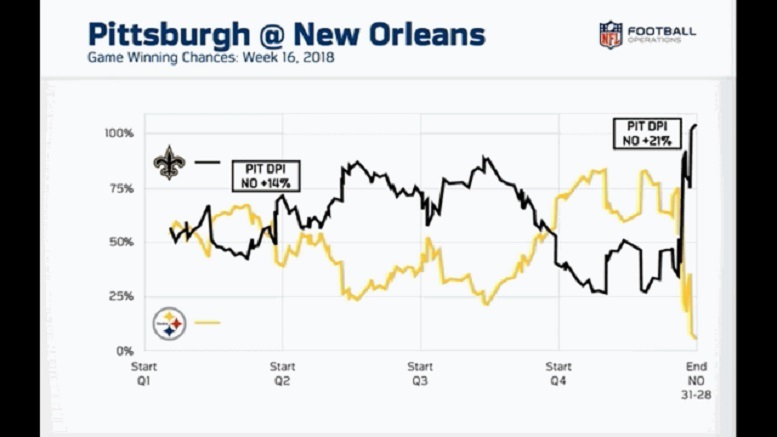 The 2019 NFL league meetings wrapped up on Tuesday but before doing so, team owners passed a rule that will make all offensive and defensive pass interference calls, and non-calls, subject to coaches’ challenges for the upcoming season. Additionally these types of calls and non-calls in the last two minutes of each half can now be initiated by a booth review. Obviously, this rule may have greatly helped the Pittsburgh Steelers last season in their Week 16 road loss to the New Orleans Saints. Additionally, had the Steelers won that game, they would have likely went on to make the playoffs.

After the owners voted to approve that specific pass interference rule change, Saints head coach Sean Payton reportedly told the media in attendance for the league meetings that it wasn’t just his team’s NFC Championship game loss to the Los Angeles Rams that it probably would have greatly impacted, but also the late regular season game against the Steelers.

Sean Payton just admitted that his team benefited from a blown call this season, citing the DPI on the Steelers vs. Alvin Kamara in the end zone that essentially gave the Saints an early TD. “That’s huge call for Pitt),” he said, because the Steelers lost & missed playoffs.

Hey, #Saints fans, one of these two plays is pass interference and one is not. Care to guess which is which? #Steelers pic.twitter.com/cnSsyrNUtd

Later in that same game, Haden was again questionably flagged for pass interference on Saints wide receiver Michael Thomas on a fourth-and-2 play from the Steelers 26-yard-line with 2:00 left in the game. While a review of that play would have needed to have been initiated by a booth official as it happened with less than two minutes remaining in the game, if done, it would have been interesting to see what the final ruling would have been as Haden seemed to pull on Thomas prior to football arriving to him. Additionally, there’s still a few who question whether or not Steelers defensive lineman Stephon Tuitt slightly tipped that football prior to it making it to Thomas.

On the heels of that new rule being passed by team owners on Tuesday, Michael Lopez, the NFL’s Director of Football Data and Analytics, released a post that indicated how the NFL Competition Committee used data and analytics to help identify fouls that have the biggest impact on game outcomes as part of their process of creating the new pass interference review rule to be voted on.

To assess impact, the committee used win probability, also known as game winning chance. Below is one example. The black line (New Orleans Saints) and gold line (Pittsburgh Steelers) in the animation show the game winning chance for both teams at each point in the game during their 2018 Week 16 matchup.

To assess impact, the committee used win probability, also known as game winning chance. Below is one example. The black line (@Saints) and gold line (@Steelers) show the game winning chance for both teams at each point in the game during their 2018 Week 16 matchup. pic.twitter.com/pR0nUOnKz4

As the Wednesday report by Lopez states, the first pass interference call against Haden at the end of the first quarter increased the Saints chances of winning that game by 14 percent, from 43 to 57 percent. The second pass interference penalty against Haden with just under two minutes left in the game increased New Orleans’ win chances by 21 percent, according to the data findings.

Armed with this and other information, the Competition Committee prioritized these two fouls as it looked to expand replay to include penalties. Under the new rules, both calls on Haden would be reviewable, as would potential offensive and defensive pass interference calls that were not made on the field.

Obviously, none of this changes what happened late last season to the Steelers and the Saints. It is, however, kind of amusing that both teams would have likely greatly benefited from being able to have pass interference calls and non-calls being challengeable. Perhaps we may have even been treated to a Saints versus Steelers Super Bowl. Unfortunately we’ll never know.

Fort what it’s worth, once Payton emerged from a conference room at the Arizona Biltmore he was reportedly grinning with Saints owner Gayle Benson standing by his side. A few minutes later, Steelers head coach Mike Tomlin reportedly gave Payton a celebratory slap on the behind as he walked past him. In case you weren’t already aware of it, both Tomlin and Payton are members of the the NFL Competition Committee.