Mike Tomlin will be approaching his 13th NFL Draft as head coach of the Pittsburgh Steelers and during that time, the team has drafted an inside linebacker within the first three rounds just three times.

Under Tomlin, the Steelers have shown to be very selective when dipping into the inside linebacking pool early and it has paid off. Timmons was in Pittsburgh for a decade, starting 126 games at inside linebacker before departing for Miami in 2017. Spence was looked at as a promising athletic linebacker who could perhaps fill in beside Timmons but injuries derailed those plans. The Steelers then hit the jackpot with their selection of Shazier in the 2014 draft but a spine injury currently has him sidelined indefinitely. It is rumored now that the Steelers may select a linebacker early again, perhaps even in the first round with Devin White, Devin Bush and Mack Wilson being the most frequently mentioned targets.

With the Steelers being extremely picky with their early inside linebacker selections, perhaps there is some correlation between Timmons, Shazier and Spence. If there does prove to be some correlation, perhaps it can be used to determine which of White, Bush or Wilson is most likely to be on the Steelers’ radar. Listed below are the best statistical season of Timmons, Shazier and Spence prior to being drafted.

If there is one statistic that jumps out right away it is the amount of tackles for a loss each of these previously drafted Steelers’ linebackers recorded. It seems that if the Steelers are going to invest in a linebacker early, they want one who has a proven track history of making plays in the backfield. Now let’s compare the above statistics to the stats of White, Bush and Wilson. 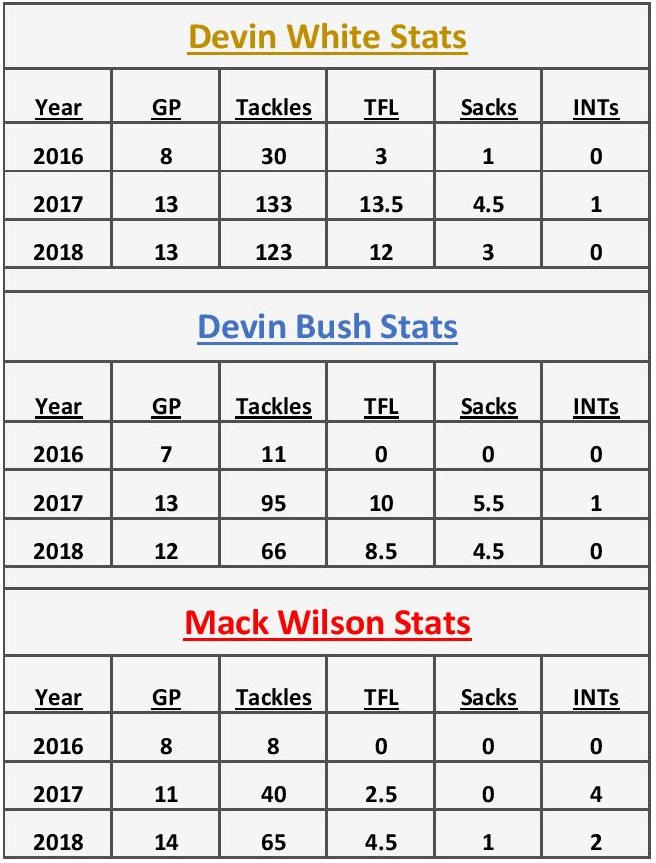 The first obvious observation is neither of these three candidates reached the heights that Timmons, Shazier or even Spence hit when it comes to tackles for a loss. Out of the three linebackers, White was the go-ahead leader in tackles for a loss though it was Bush who was able to record the highest percentage of tackles for a loss with 12.8% of his 66 tackles in 2018 going for a loss of yardage. Wilson on the other hand sticks out like a sore thumb as he has struggled at making any sort of impact behind the line of scrimmage. If judging strictly on tackles for a loss, it seems that Wilson will not garner much of the Steelers’ attention.

Statistics or box score scouting is only one part of the equation. It is not the be-all, end-all of player evaluation but when used together with other scouting methods, it can be a helpful tool in evaluating a player’s performance. Film is another part of the equation and our staff has that covered with our profiles of White, Bush and Wilson. Another piece of the puzzle is athletic testing and it would be interesting to observe how well this year’s trio compare to the likes of Timmons, Shazier and Spence. 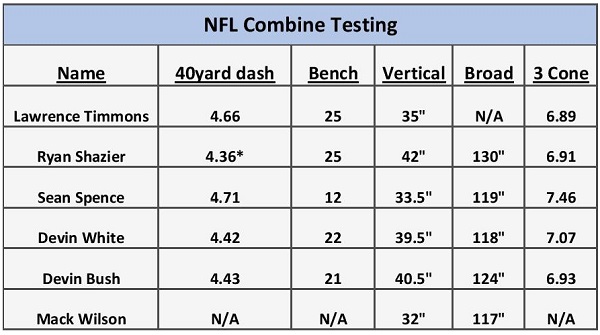 White and Bush certainly put on quite the show at this year’s NFL Combine, as they ranked first and second in 40-yard dash times for inside linebackers. Both of the linebackers were less than a tenth of a second off Shazier’s 4.36 time (clocked at Shazier’s pro day). Bush distanced himself as leader of the pack from there, leading all inside linebackers with a 40.5” vertical jump while his 124” broad jump also fell into the top three for his position. His 6.93 3-cone time also came extremely close to Shazier territory, falling just 0.02 short of the linebacker’s time.

The Steelers have been rumored to have a lot of interest in Bush as they sent as many as eight to ten members of personnel to his Michigan pro day. Tony Pauline noted in a recent episode of his podcast that the Steelers were all over Bush at his pro day and even stated that all signs point to the Steelers selecting Bush in the first round should he be available.

The team’s heavy interest in Bush makes senses for a variety of reasons mentioned earlier. The Steelers have a desperate need at inside linebacker that Bush would fill instantly. Bush may have not met the same number of tackles for a loss that Timmons, Shazier, Spence or even White reached but a significant percentage of his tackles were recorded behind the line of scrimmage. His athleticism also projects better than White and Wilson as the Michigan linebacker almost tested as well as Shazier, the linebacker he would essentially be replacing. If the Steelers truly want to find a replacement for the athletically gifted Shazier, Bush may have proved to be the best option available. Now the only question is will he still be available when the Steelers are on the clock?