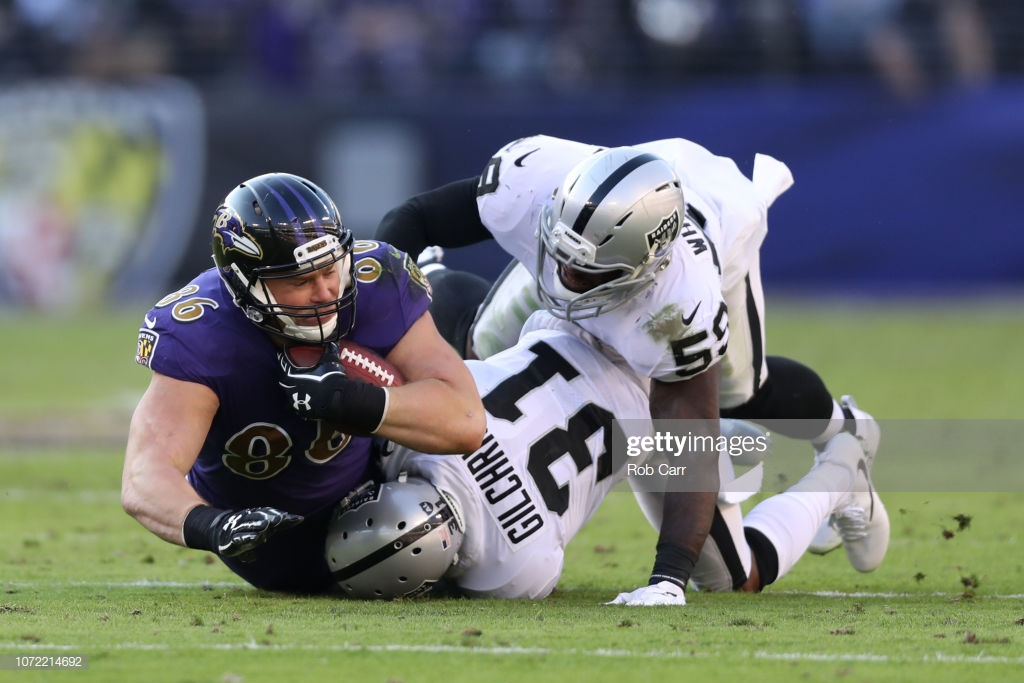 So the Baltimore Ravens’ big press conference to announce the re-signing of one of their pending free agents was…tight end Nick Boyle, whom you may not even be aware of. And they gave him a three-year, $18 million contract after they drafted tight ends Hayden Hurst and Mark Andrews in the first and third rounds in 2018, respectively.

My sense is that the Ravens believed they would have such a hard time pitching this contract to their fan base that they employed the services of ESPN to pump up the signing, with Adam Schefter Tweeting out that he was “one of the more desired free agents available and quoting an anonymous coach as saying that he “would have been the best TE to hit free agency in the last three years”.

One of the more desired free agents available. No less than 10 teams interested in the player one GM described as “the best blocking tight end in the league.” https://t.co/6lzbAF2qxH

One NFL coach on Nick Boyle, who is re-signing with Baltimore instead of becoming a free agent next week: “Would have been the best TE to hit free agency in the last three years.”

That’s a bold statement for a pass-catching position about a player who literally has never scored an NFL touchdown. It would be a nice thing to say about an offensive lineman, but Boyle has averaged under 13 yards per game over his four-year career.

Yes, he is heavily used as a blocker and is definitely above average in doing it, but he is also not what, according to Schefter, “one GM described as ‘the best blocking tight end in the league’”.

Let’s understand this. The Ravens just made him the 15th-highest-paid tight end in the league based on per-year averages and the guy’s never caught a touchdown pass. If you look at the names of the tight ends above him on that list—from the top consisting of Jimmy Graham and Travis Kelce to the bottom with Cameron Brate, Vance McDonald, and Eric Ebron—there is a pretty stark difference.

To new general manager Eric DeCosta’s credit, he did say that the team would emphasize that players in their offensive system would need to be blockers as Greg Roman builds a new scheme around second-year quarterback Lamar Jackson.

But really, that’s just the thing about this deal. Boyle has more value to the Ravens than any other team, surely, yet they didn’t even let the market set his price. This really feels like a panic overbidding on Baltimore’s part, and it pains me to say that because as those who have read me for years know, I love me a blocking tight end.

The Pittsburgh Steelers didn’t hold any press conferences for Ramon Foster or Maurkice Pouncey yesterday. The Ravens held one for Boyle. I’m not going to keep knocking the situation because I don’t begrudge Boyle his new windfall or recognition—and blocking tight ends should be valued higher than they are in today’s game—but it just feels incongruous with the reality of today’s landscape.

So far this offseason, the Ravens have made Boyle essentially the highest-paid number two tight end in the league—perhaps even number three tight end—and made Tavon Young the highest-paid nickel back. Meanwhile, they released Eric Weddle with nobody to replace him while C.J. Mosley, Terrell Suggs, and Za’Darius Smith remain on track to become unrestricted free agents.