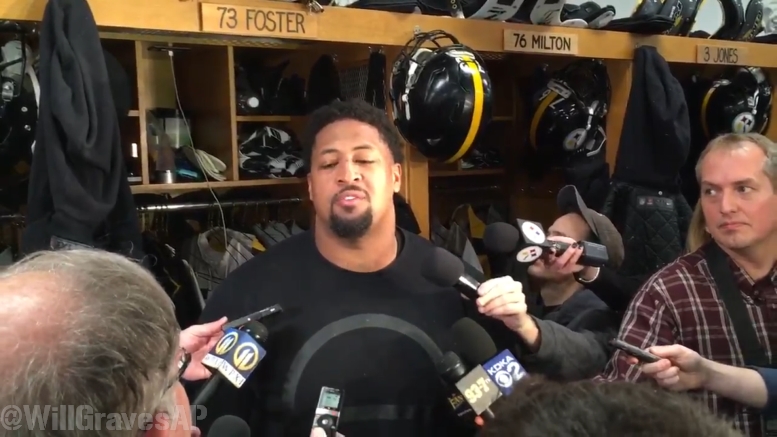 The Pittsburgh Steelers are in the midst of one of the stupidest offseasons in recent memory in which the use of the word “kid” and the accusation of an intentional fumble are drawing headlines. And you thought the negative attention would die down once the problems of Antonio Brown and Le’Veon Bell had been eliminated.

The draft can’t come soon enough so that the sports shows will have more to talk about than the latest stupid Steelers non-story. It’s forced the players to have to address the issue in some form or fashion, even if it doesn’t come about in the public eye.

Way back toward the end of the season, defensive captain Cameron Heyward said that if any free agent was worried about signing with the Steelers based on what they had heard reported through the media, they should come talk to him about what’s really going on first.

Ramon Foster, the second-longest-tenured player on the team short of Ben Roethlisberger, struck a similar note yesterday when he spoke to Missi Matthews for the team’s website. When she asked him about how he approaches new signings, this is what he had to say:

“I think we just open up our arms to them, number one, and let them know that, hey, first and foremost, what you hear in the media is not true. I’ll just throw that out there right now. And secondly, man, anybody that’s come in our locker room has absolutely loved it”.

He said that you can go to just about anybody who’s been in the locker room and ask them about the time there and if it was terrible and they would say that it wasn’t. “Because they know that Coach Tomlin and staff treat us like grown men, and in that, you have a chance to flourish”, he said. “I think if anything, we might not be the biggest market, but guys have a chance to actually build their brand, build what they want to be within the team concept, as we’ve seen guys do in the past”.

We have seen this work both ways. Brown and Bell certainly successfully developed their brands, but they ultimately became bigger than the team. JuJu Smith-Schuster has been very successful in carving out his own market, but only time will tell regarding how that plays out in the team dynamic.

Make no mistake, the players are listening to everything that is being said, or at least much of it anyway. But they’re holding their tongues in the public because they know that they have virtually nothing to gain from it.

After Steven Nelson signed earlier in free agency, he was asked about his reaction to all the media attention surrounding the Steelers this offseason. He said that he didn’t pay attention to “all the crap that’s in the media” because it wasn’t true.