Since becoming head coach of the Pittsburgh Steelers, Mike Tomlin’s ‘Next man up’ philosophy has lived and breathed throughout his team. No position group has represented that philosophy more than the offensive line as former offensive line coach Mike Munchak has frequently turned afterthoughts and late round draft picks into serviceable starters. Since going undrafted in 2015, lineman B.J. Finney has frequently been called upon as the next man up and the Steelers rewarded him Wednesday night, applying a second-round tender on him.

The second-round tender will earn Finney $3.095 million salary should no team pay the hefty price required to negotiate with him. It is a hefty raise from the $630K he made last season and speaks volumes to how much the Steelers value him. Consider that Finney’s second round tender salary is more than starting left guard Ramon Foster has ever made in yearly salary until Foster signed a two-year, $8.25 million deal just shortly ago.

Below is how much salary the Steelers paid Foster as a starter from 2013-2018. Notice all the figures are less than Finney’s $3.095 million.

Foster’s salary through the years

While it initially looked like Foster was going to test the market in an attempt to cash in one final time, the Steelers were able to lure him back on a two year deal. Had Foster tested the market, the Steelers were confident enough in Finney’s ability to step in thus the reason why they placed a second round tender on him. It is a true win-win situation for the team as they get their starting left guard back and likely ensure the return of their top backup. Though Finney’s price may be steep for a backup, his play has warranted a pay raise.

Finney has proved his worth throughout the years, being ranked among the top ten free agent linemen by PFF. According to PFF, Finney has allowed just five pressures over 234 pass blocking snaps over the last two seasons. While his work as a pass protector is certainly incredible, it is his play as a run blocker that really makes the former undrafted lineman a high commodity for the Steelers. 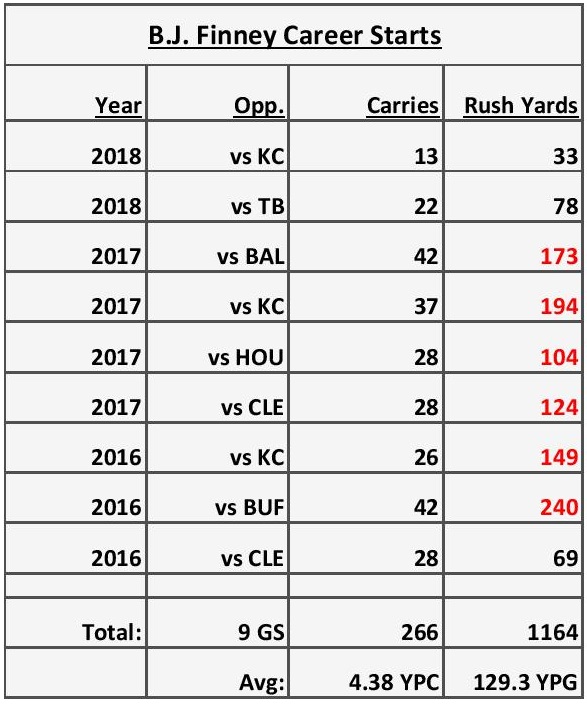 In six of Finney’s career starts, the Steelers have eclipsed 100 yards rushing, including monster performances that saw the Steelers gash the Chiefs for 194 yards in 2017 and 240 yards against the Bills in 2016. It was during that game against the Bills that also saw Le’Veon Bell break the franchise record for rushing yards in a game. Overall, the Steelers have not missed a beat with Finney in the starting lineup, averaging 129.3 rushing yards per game and just about 4.4 yards per carry.

Another criminally underrated aspect of Finney’s game is his versatility. While Finney has primarily filled in at Foster’s position at left guard , he has played all over the interior offensive line for the Steelers. Finney has filled in admirably at left guard, including performances against the Chiefs and Bills. He also filled in at center for Maurkice Pouncey and was even called upon to make two starts at right guard last season for an injured David DeCastro.

Finney’s second round tender is a great balance at paying for what he has contributed and recognizing his emerging talent. The Steelers have thanked Finney for his play over the last few seasons while also making it clear that they feel he could consistently start if called upon. Though Foster is now returning, the Steelers have made clear how much they value Finney as a top backup and more than capable starter.