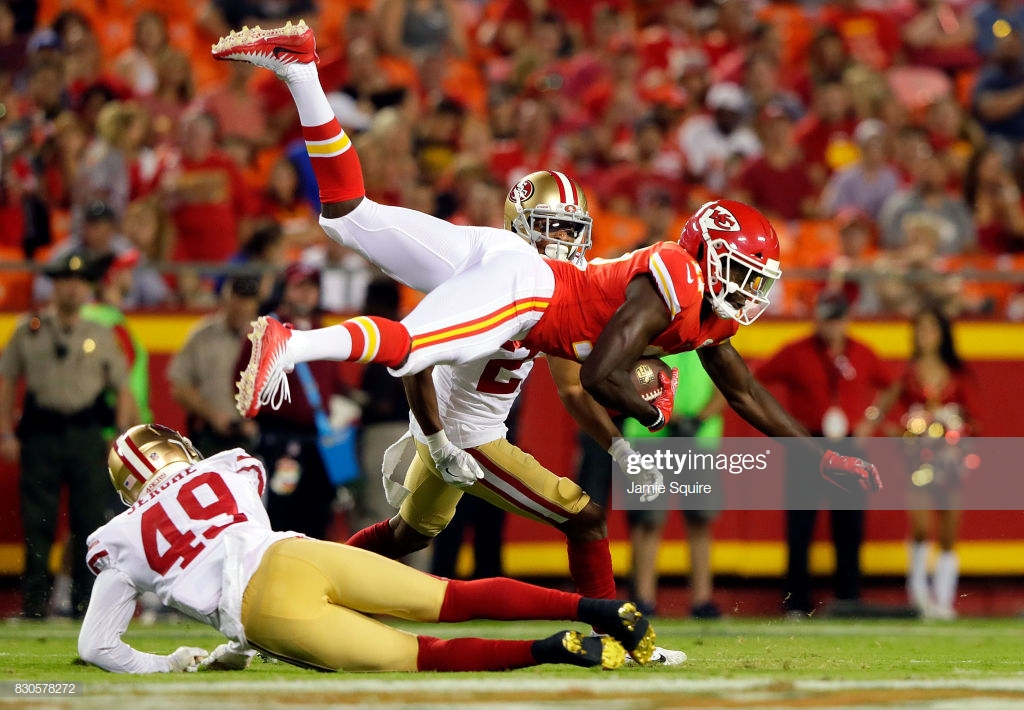 Free agency is almost here. And the Pittsburgh Steelers may finally make a splash.

Granted, it’s unlikely to come on the offensive side of the ball. Wading into the deep end will take a defensive path. I’ll release my defensive wishlist, which I’ll be honest, is more exciting, tomorrow. But the Steelers have needs offensively too and could make some low-budget moves to plug some of those holes.

My wishlist of players who would fit in this offense at positions of need.

John Brown/Baltimore Ravens – The biggest “name” on the list for the offense. Truth is, he’s probably out of the Steelers’ price range and given how well they find wideouts in the draft, there’s no compelling reason to throw money that rises above the bottom-tier level.

But should it turn into a rainy day and Kevin Colbert is feeling like doing something bold, Brown fits. He’s spent time as the Z and slot but the X is his home.

“When you look at what he’s been able to do for us over the years, a solid ‘X’ (outside receiver), a guy that can take the top off,” then Cardinals head coach Steve Wilks said at last year’s Combine. “Being on the other side and trying to game plan and go against him, he’s definitely a threat.”

He’s fast and twitchy, capable of stringing together multiple moves at the top of his route to create space at the top. Sells routes well with his stem and head/body fakes. Uses that vertical threat to work corners off with speed and win underneath. He isn’t Antonio Brown as a YAC threat but he can make you pay if he has a crease.

Incomplete pass but watch him win at the top of his route.

In his career, he’s averaging exactly 15 yards per catch and 22 touchdowns, good production for someone who will never be mistaken as the focal point of any offense.

But the Steelers have seen a lot of him and if they want a veteran receiver to help replace Brown, another man named Brown works. He was a Steelers’ pre-draft visit back in 2014.

Chris Conley/Kansas City Chiefs: Conley would have a similar goal of replacing Brown’s X spot but a bigger body, younger player, and cheaper price. Conley played the X in Kansas City though in Andy Reid’s offense, that’s been more of the possession type and his career 11.9 yards per reception (10.4 in 2018) back that up. The Chiefs did move him around, however, and he’s an athlete who tested really well at the Combine (4.35 40, 45 inch vertical, you get the idea).

Not only do you have to replace what Brown gave you between the 20s but what he did to find the end zone. You’re replacing 15 touchdowns from last year. Conley only caught 32 passes as a Chief but five found paydirt, all of them inside the 20, tying what Brown and JuJu Smith-Schuster recorded.

Here, Conley settles, finds the ball, and plucks it in traffic.

What makes Conley really attractive is his experience with a scrambling, keep-the-play-alive quarterback in Patrick Mahomes. Granted, Mahomes is on another level as Ben Roethilsberger, whose become more of a pocket passer, but there are still several scramble drills from him a game, especially with an offensive line that gives #7 plenty of time to dance around.

Let’s be clear and honest here. No name in free agency, no one player, is fully replacing Brown’s production. But Conley can be offered the chance to compete and start, serving as an insurance policy for the draft and any rookie receiver who plays more like James Washington did than Smith-Schuster. Steelers also like “pedigree” players in free agency and Conley was a third round pick from a Power 5 conference.

Aldrick Robinson/Breshad Perriman: Lumping these two together because as of this writing, both players are probably good bets to return to their current teams. Robinson the Vikings, Perriman the Browns.

Robinson crossed the 30 year old bridge but this team has signed the slightly elderly wideout before for cheap; Arnaz Battle and Lance Moore are examples of that. He’s a mostly one-note deep threat who somehow keeps finding the end zone. Since 2016, he’s caught just 56 passes. Nine of them crossed the goal line.

Perriman semi-revived his career in Cleveland after flaming out in Buffalo. Made big play after big play in Cleveland with Baker Mayfield, averaging an eye-popping 21.2 yards per catch with two scores. If you can wrestle him away from the Browns, he’d an explosive threat for this offense.

Davis is my favorite of the three. Saw him on the kick coverage unit, beginning the year at R5 before switching to L2, and worked as the left wing on punts. That’s where Sean Davis lines up; I’d love to get him off that unit. Geremy Davis played 40% of the Chargers’ special teams snaps. Shows good hand use and ability to shed blocks in coverage. Like an edge rusher, watch him rip and flatten through on this kick to make the tackle.

Great example of how running down kicks/punts is like being a pass rusher. Need great hand use to defeat blocks. WR Geremy Davis rips through the block, turns the corner, makes the tackle. Why DE/EDGE are valued here (and one reason a guy like Rosie Nix is so good). pic.twitter.com/gVQ783JCwo

Eight tackles last year. Impactful hitter willing to sacrifice himself and plays with a lot of energy. DHB-size at 6’2 216. And I presume very, very cheap.

Shepherd ran down kicks and was a gunner with the Giants. Bellamy did the same for Chicago, offers a little more as a receiver, and played the fifth most special teams snaps – 245 – of any receiver last year. He played some cornerback in college. Interesting note for his resume.

Jeff Heuerman/Denver Broncos: Lose Jesse James? Replace him with Heuerman, who brings a similar game, though doesn’t have the durability track record James shows. Few do. But Heuerman makes combative catches and is tough in his own right, finishing out the Steelers game this year with broken ribs and a bruised lung.

Three of his four touchdowns below.

He “broke out,” relatively speaking, with 31 receptions for 281 yards and two scores with Denver. There’s also a Steeler connection. Ohio State kid, you know the front office loves that, and he was brought in for a pre-draft visit prior to the 2016 draft. Tons of free agents the Steelers sign come off that list: Ladarius Green, LeGarrette Blount, and Isaiah Pead all fit that bill.

C.J. Uzomah/Cincinnati Bengals: Stealing a Dave Bryan suggestion here. Bengals could keep him knowing they’re also letting Tyler Eifert hit the market but Uzomah, like Heuerman, was a pre-draft visit. He filled in nicely as the starter this year, hauling in 43 passes for 439 yards and two touchdowns. Good size and can block a little bit. Can offer him the #2 role in Pittsburgh, split time with Vance McDonald, and vaulting into the starter’s spot if McDonald’s health doesn’t hold up as well as it did in 2018.