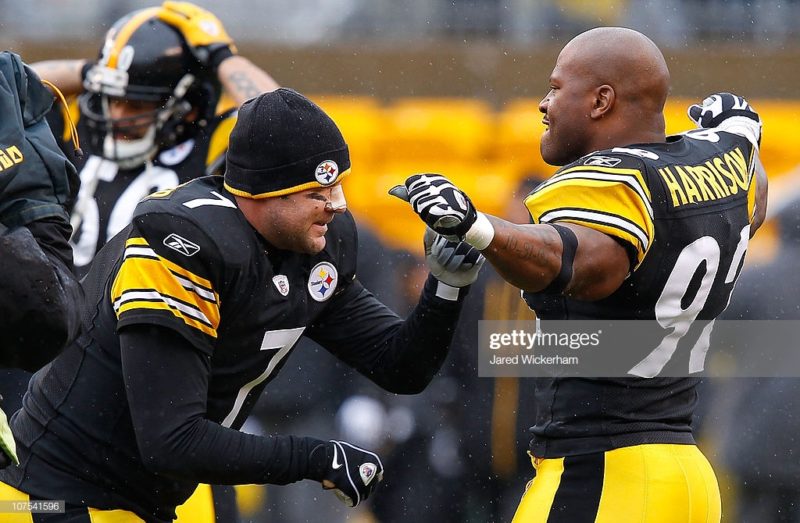 Pittsburgh Steelers quarterback Ben Roethlisberger has received quite a bit of criticism this offseason from several different teammates such as wide receiver Antonio Brown and running back Le’Veon Bell, and even former running back Josh Harris, who is no longer in the league as of several years ago. A lot of the criticism directed at Roethlisberger has had to do with him being accused of not being a great leader along with him seemingly possessing an “ownership mentality.” On Monday, however, former Steelers outside linebacker James Harrison stood up for Roethlisberger during two different sports talk show interviews.

First, Harrison was asked during his Monday interview on ‘Undisputed’ how much he thinks Roethlisberger is to blame for all of the Steelers problems so far this offseason.

Harrison then proceeded to defend Roethlisberger against him recently being accused of being a bad leader and he explained why he thinks those accusations from Brown and Bell may have come about.

“So for them, what they’re speaking, that is their truth. For me, I think Ben is a good leader,” Harrison said. “I know Ben a little more in depth then they do, obviously, because they felt like they needed to build a better relationship with their quarterback, or their quarterback needed to build a better relationship with them. With that being said, both sides have to initiate something if you want that to go on.

“So, it’s fault on them and is fault on Ben as far as them not getting the relationship that they want. You could do something as simple as saying, ‘you know what, you don’t want to go out to the club, let’s set a dinner. Every Tuesday we get together for dinner, we sit there and we talk, we may watch film, or whatever, to try and build some type of bond or relationship.’ If that’s what it is, you feel like it’s going to help you out.”

During his Monday interview on ‘The Herd with Colin Cowherd,’ Harrison was asked if he thought Roethlisberger was a good teammate when he played with him all of those years in Pittsburgh.

"The people that are saying he's a bad teammate, that's their truth. For me, I think Ben is a good teammate and a good leader." — @jharrison9292 pic.twitter.com/bfd5SSA9DF

“Yeah,” Harrison said. “I think it’s dependent on the relationship that you have with that person, which gives you the way you see them, or how you respond to them. And therefore, the lack of relationship, that makes it to where now you’re just going off what you perceive to be that person, because you don’t have a deeper and detailed understanding of them. As far as how you communicate with other people, or don’t communicate with people, gives them their perception of you and how you communicate with other people around there.”

Harrison then went on to address why he thinks Roethlisberger is accused of having an ownership mentality during his interview with Colin Cowherd.

“So, them saying that he has an owner’s mentality, you know, you see him talking to the head coach, the GM, the owners and a lot of guys are nervous, or think that he’s unapproachable,” Harrison said. “I came in and I was already there and when Ben came in in 2004, so I met a rookie, I met a different player. So, it was easier for me to bond with him, I guess it is than a guy that’s coming in.”

As for Roethlisberger being accused by Harris a few weeks ago of fumbling on purpose late in the teams 2014 regular season finale against the Cincinnati Bengals, Harrison was asked what his take on that is.

“You know, that’s what he believes, obviously since he stated it,” Harrison said of Harris’ claim of Roethlisberger fumbling on purpose in 2014. “I don’t see anyone going to that extreme even if the situation was as he said it was – he didn’t like what was going on, the call, whatever, and he decided to, you know, do what he did. I don’t see that. I don’t see anyone going to the extreme. Anything can happen. You know, the other team gets the ball, they could run it back – touchdown. Now you’re in a fight at the end of the game.”

Harrison was asked if he even remembers that 2014 fumble and if there was a big discussion about it after the game in the locker room.

“I don’t even remember it,” Harrison said.