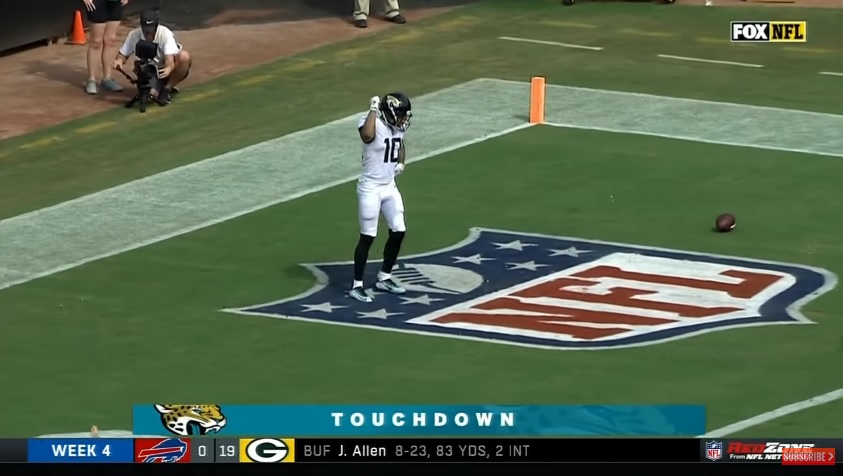 There’s isn’t a lone player who will replace Antonio Brown. It sure won’t be Donte Moncrief. But the signing, reportedly to a two-year deal, fills a critical need. Depth at the “X” receiver position, the one AB manned so well, to give the Pittsburgh Steelers flexibility come the draft. Moncrief is capable of being a vertical threat with experience being isolated at that critical, outside position.

The “X” spot is normally the backside receiver in 3×1 formations or to the open side of the field. They have to be able to beat press coverage because they are on the line of scrimmage so much – in 3×1, they’re not covering any other eligible up – be a big play threat, and comfortable with being “the guy.”

While Moncrief is versatile, capable of playing in the slot, he also has spent plenty of time as the X in Indy and Jacksonville. From there, he’s become a threat in the red zone, an enticing matchup because he was left one-on-one, and vertical threat into the open field.

Three examples of his work in the red zone. All fades, isolated as the “X” receiver. One-on-one with the corner, these are plays receivers get paid to make.

And here he is showing his wheels in space. In these two clips, Moncrief is the X. One as a Colt, tracking the football and making the grab and the other last year in Jacksonville, stacking the corner and burning him vertically for a 67 yard score.

Another example of Moncrief as a vertical threat. He is lined up as the “Z” here, top of the screen, but you see his speed and technique. It’s important for receivers to “stack” the corner, get on top of him, to win the route. So when this ball is underthrown, the corner is boxed out, like a power forward shielding his opponent for a rebound, and Moncrief is able to make the grab even despite having to slow up.

So that’s the good with him. The bad? He’s not a natural separator and lacks the quickness and burst to win short and intermediate. That’s definitely a downside and obvious difference between someone like Brown. While he can make tough, combative catches, like the ones you saw in the red zone, his hands are suspect. Too many drops, like these.

I’ll write more about him throughout the week and how he’ll be infused within the Steelers’ scheme but my brief scouting report on him.

– Great vertical threat who will burn slow corners or ones that play with poor technique
– Able to stack and box out corners on vertical routes, letting himself make the play even on underthrown passes
– YAC threat who can outrun safeties’ angles
– Versatile player who can line up at the X and slot spots
– Asset in red zone, able to make combative catches, tracks the ball well and times his jumps
– Vertical threat helps open up underneath routes, threatens corners and gets them to open their hips with his speed

– Doesn’t create enough separation on breaking routes, straight-line player and not very twitchy
– Lacks burst at his break point and must consistently run his routes hard
– Questionable hands and drops easy passes
– Lacked production and has never been a #1 receiver

Signing Moncrief doesn’t change the Steelers’ draft plans. It affords them flexibility, they don’t have to take a receiver in the first round if it doesn’t make sense, making it a very classic and typical Kevin Colbert move.

At a baseline level, he’ll be able to mimic some of the things that made Brown and this offense effective. Not nearly on the same level and in other ways, AB and Moncrief are completely different players, but this offense functions best with vertical threats who can keep safeties back and on the numbers. And that’s something the newest Steeler can do.