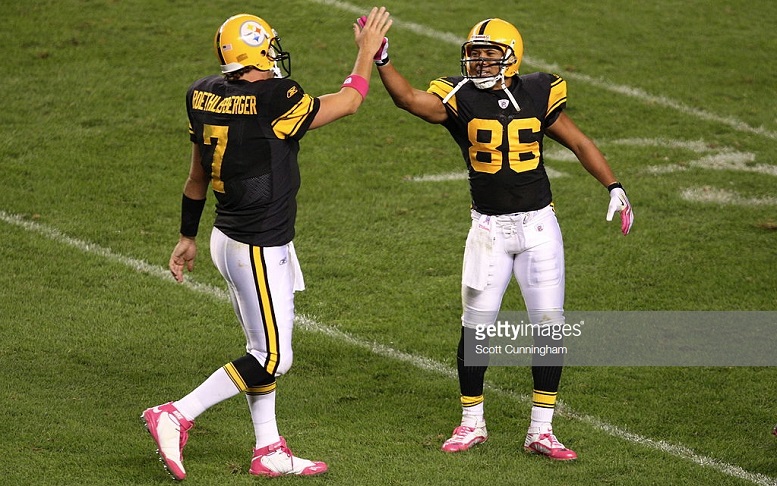 Former Pittsburgh Steelers wide receiver Hines Ward has been active doing interviews the last few weeks as the head of football development of the new AAF league has been busy promoting the upcoming start of the inaugural season. During his recent slew of radio interviews, Ward has consistently criticized the current culture of the team that he played his entire NFL career for and that has mostly included him pointing to, what he believes, is poor leadership being shown by quarterback Ben Roethlisberger and head coach Mike Tomlin.

On Wednesday, Ward was a guest on ‘The Will Cain Show’ on ESPN Radio and it didn’t take long for him to be asked once again about Roethlisberger, specifically, and what it is about the quarterback that could be contributing to all of the drama that has seemed to surround the Steelers the last several season.

“I just know that when you’re looked at as a captain, sometimes it’s not always good to air out people’s criticism,” Ward said. “I just know players really don’t like other players talking about them in the media. I know Ben has a radio show in Pittsburgh and sometimes when you criticize your teammates without talking to them personally, it rubs people the wrong way.

“And I know, I’ve heard it. You talk about a band of brothers, we’re always talking about we’re a band of brothers, well, treat me like a bigger brother. You’re the bigger brother, come talk to me. You don’t have to call me out in the media to criticize me saying certain things that he’s already said on air and the radio. All you do is open up a can of worms when you’re doing that.”

Ward once again gave the example of several Steelers offensive linemen following Roethlisberger’s poor example during the 2018 season when they criticized running back Le’Veon Bell for deciding to sit out the entire year instead of playing under the franchise tag.

“That is a major no-no,” Ward said. “It’s kind of an unwritten rule in the league, you don’t talk about other people’s contracts, period. You’re not really supposed to talk about your teammates, in general, to the media. So I just think the leadership there, I don’t know if it’s there or if it exist, but I know when you have your head guy, the captain, criticizing players, that doesn’t sit well with a lot of players in the league in general.”

When Ward was then asked specifically if Roethlisberger was the only person in the Steelers organization that he was talking about and the former NFL wide receiver quickly took the opportunity to lay some of the blame on Tomlin and wide receiver Antonio Brown as well.

“I think it’s everybody,” Ward said. “I think it’s Mike Tomlin as well. It’s Mike Tomlin, it’s Antonio Brown, it’s Ben Roethlisberger. It’s not just one person, one incident. I just think from the head coach, we have too much talent on that team not to be in the playoffs and that’s a reflection of the head coach and leadership. So, I think everyone’s kind of got their hand in the cookie jar and hopefully all three guys, or whoever else is a leader in that group, can sit down and lock the door and hash it all out and start preparing for football.”

Ward certainly didn’t give quick, short answers to the Steelers-related questions he was asked on Wednesday as he ended his criticism of his former team by taking one last shot at the culture that’s currently being displayed in Pittsburgh and how it pains him as a former member of the organization to see that.

“It’s embarrassing for me being a former player that we talk more about the off-the-field stuff than rather than the on-the-field,” Ward said. “I saw my Steelers beat the defending Super Bowl champions at Heinz Field, that’s what it should be about. It should be about the play, it shouldn’t be about the extra stuff that goes on with our organization. That’s not our culture, that’s never been the Steelers culture.”

As mentioned by me in a previous post, while Ward’s 2019 offseason message to the Steelers is not hard to understand and his criticism of his former team not out of line now that he’s no longer part of the organization, he seems to have forgotten all about how he did the same sort of things when he was still in the league. Not many people will soon forget how he criticized Roethlisberger’s 2010 offseason actions that led to the quarterback being suspended to the media just like they won’t forget how he questioned his teammates toughness as a player few years later during a media interview.

Roethlisberger and Tomlin both aren’t likely to conduct many interviews in the next five weeks but the next time that each one does, you can probably count on each being asked to respond to all the criticism they have each received from Ward and others over the course of the last few weeks.