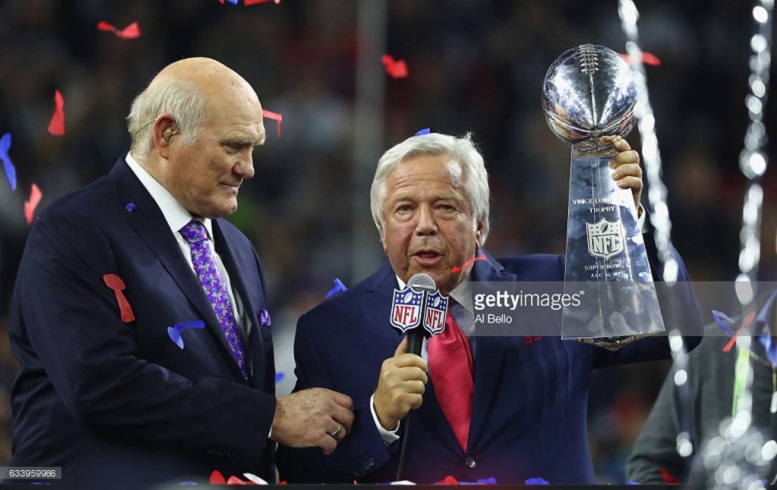 The 2018 season might have ended on a happy note for Robert Kraft and his New England Patriots, the NFL team that he has owned since 1994, but this year could end on a much sourer note. Yesterday, the 77-year-old was officially charged with two counts of first-degree solicitation of prostitution, which were originally announced on Friday.

In a press conference on Monday, authorities revealed the official charges as well as new details about the broad case in general and of Kraft’s specific involvement. Reportedly, he is merely a pawn in a wide sting operation throughout the state of Florida to crack down on a human trafficking operation.

Two women had run a series of massage parlors throughout the state, for which they would traffic in women primarily from China, often housing them within the parlors in poor living conditions. Officials, including the Department of Homeland Security, had been monitoring the case for eight months, and eventually obtained a warrant to place a surveillance video in the parlor that Kraft attended.

According to authorities, Kraft visited this particular parlor twice, on consecutive days, first on the 19th of January earlier this year and then on the 20th. That is significant in that the 20th was the day of the AFC Championship Game between his Patriots team and the Kansas City Chiefs. Feel free to add another pun here.

There are some graphic details that officials provided about the exact nature of the interactions between Kraft and two women in the parlor of a sexual nature, which they were able to describe because of video evidence of the incident. There is also clear video of him providing them with money in the form of cash.

Kraft is only one of dozens of men who were caught on this surveillance video patronizing this massage parlor for the express purpose of receiving sex acts. His charges could come with up to a year in prison, 100 hours of community services, and a mandatory class on the dangers of prostitution and human trafficking.

For his part, he issued a statement on Friday categorically denying any wrongdoing and hasn’t seemed to do much to change his routine, but we’ll see how much longer that lasts as we learn more details about the case and draw closer to a court date.

Kraft was married to Myra Kraft from 1963 until her death in 2011. They had four children, among them Jonathan Kraft, who serves as the president of the Patriots. He is also the president of The Kraft Group, which overseas the family’s business interests.

The NFL is “seeking a full understanding of the facts, while ensuring that we do not interfere with an ongoing investigation”, the league said in a statement, adding that it would “take appropriate action as warranted based on the facts”.