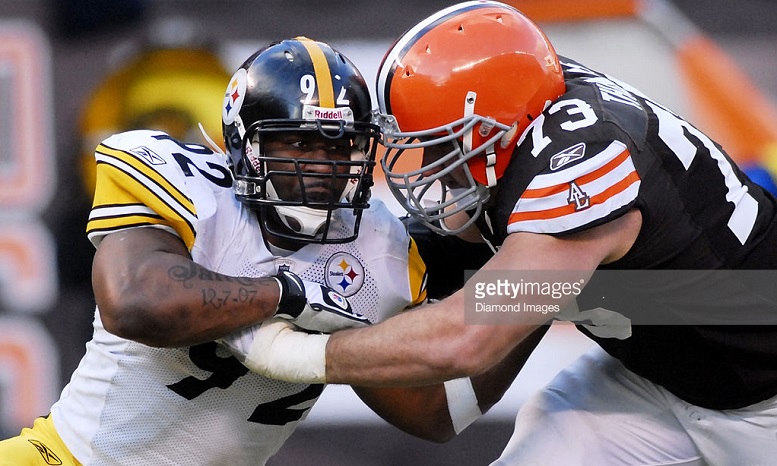 Joe Thomas was unquestionably one of the great offensive linemen of his era, and I don’t think there’s really any doubt that the former Cleveland Browns first-round pick will be a first-ballot Hall of Famer in a handful of years.

Not only was he a fantastic football player, he is also by all accounts a good guy. And as it turns out, unsurprisingly, he’s got a good football mind. He has been breaking down film lately for the team’s website, and recently looked back at his first game against Pittsburgh Steelers outside linebacker James Harrison all the way back in 2007.

“It’s interesting reflecting back on this game because, going into this game, I was a rookie, obviously, and I never had any NFL game film out there”, he said. “James Harrison was kind of right at the beginning of his long and storied potential Hall of Fame career”.

“Going into this game, before we got the scouting report, I honestly didn’t even know who he was until Coach Romeo Crennel at the time started beating into our heads that ‘James Harrison’s coming, he’s gonna try to run you over, he’s a big speed-to-power guy’”.

He recalled Crennel quizzing him, which served as an early wakeup call as a new pro. “I’ll never forget sitting in the meeting room on Monday morning getting ready for this game”, he said. “It was early on in my career—it was one of my first games—and Romeo Crennel would stand up in the front and he would quiz guys on who your opponent is because he wanted to see who’d been studying at that point”.

“I’m a rookie so I don’t really know that I’m supposed to study my opponent weeks in advance. I was just gonna wait until Tuesday or Wednesday the week of and start doing my film breakdown. He was asking me all these questions about James Harrison…and I didn’t have any of the answers”.

But it wasn’t long before he learned what he had to do as a professional in the film room. He went on to talk about Harrison and the tackles that he was able to have success against. “The guys that always struggled the most with James were really tall guys that didn’t bend well…they would struggle to bend their hips and their knees to get down to his level because he was able to do his rip up the field where he was so low that he could get under your pads and actually lift you up, that’s how strong he was”, he said.

“The guys that always seemed to handle James pretty well were the guys that could handle his bull rush, but then also guys that were flexible enough to bend down and be on his level”.

The whole 22-minute segment is great football viewing to watch one of the greats talk about not only his own tape, but also a bit of the process of preparing for a game. He even talked about Bud Dupree and Joey Porter, showing the breadth of his knowledge, and philosophized about the changes defenses have made to compete against more prolific offenses of this era.