It’s been a bumpy road for Hawkins, entering the most crucial year of his career, a roster spot most certainly on the line. Injuries have marred his development and chance to prove the fourth round pick the Pittsburgh Steelers invested in the 2016 NFL Draft.

A rookie season was cut short due to a shoulder injury, stunting the growth of an impressive camp for Hawkins. He stayed healthy in 2017 but played sparingly. 2018 looked promising. Chris Hubbard left for a starter’s role in Cleveland, giving Hawkins the chance to be the swing tackle. But the team selected Chukwuma Okorafor in the third round and during OTAs, Hawkins suffered a torn quad, shelving his season before it barely got off the ground.

Toss in a nagging injury his junior year at LSU and it’s been more cold tubs and trainer’s tables than practices and game tape. But Hawkins remains forever optimistic, telling the Trib’s Chris Adamski he believes that bad luck will end.

“Honestly, man, this probably had to be my third injury I have had to actually sit out from playing football, so I believe it’s probably done with,” he told Adamski.

For a guy in his position, stopped short time and time again, it’d be easy to give up. Being on IR sucks, plain and simple. You’re not as involved with the team, focusing on rehab, not meetings, and it’s easy to be forgotten. But Hawkins has done his best to look involved. I saw him at every training camp practice and he was on the sidelines for most games I watched, even when the Steelers were on the road. Here’s an example from Week 10 when Pittsburgh hosted Carolina. Apologies for the Zapruder quality. When you spend a half hour playing Where’s Waldo? you take what you can get. But that’s him. 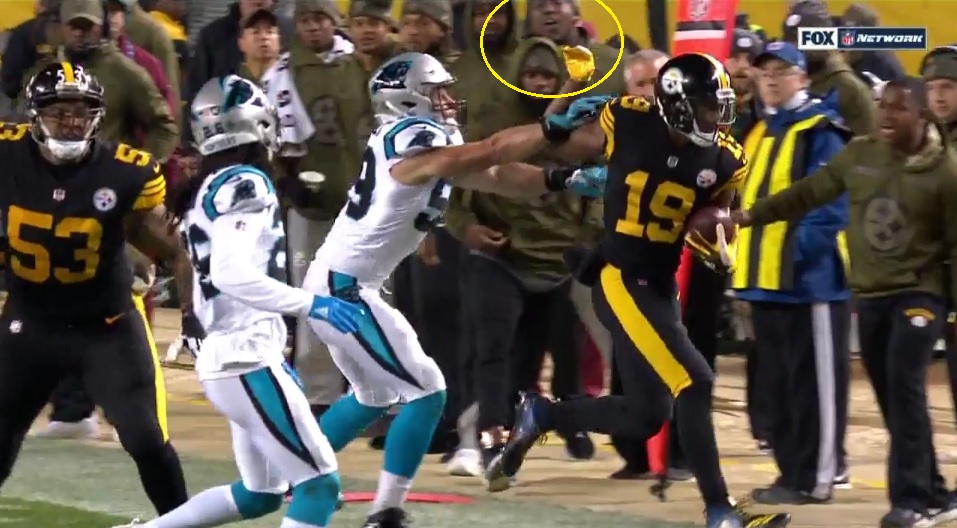 Attitude doesn’t grant you a roster spot but it’s a critical first step. Competition is going to be fierce and assuming Ramon Foster, B.J. Finney, and Marcus Gilbert are all part of the 2019 team, there won’t be many open spots left. At the same time, don’t forget about the traits and talent that got Hawkins drafted in the first place and the promise he showed three camps ago. He’s already announced himself fully healthy.

“I would go out there right now, and I could. I am definitely, 100 percent, going to be going all over it (at OTAs).”