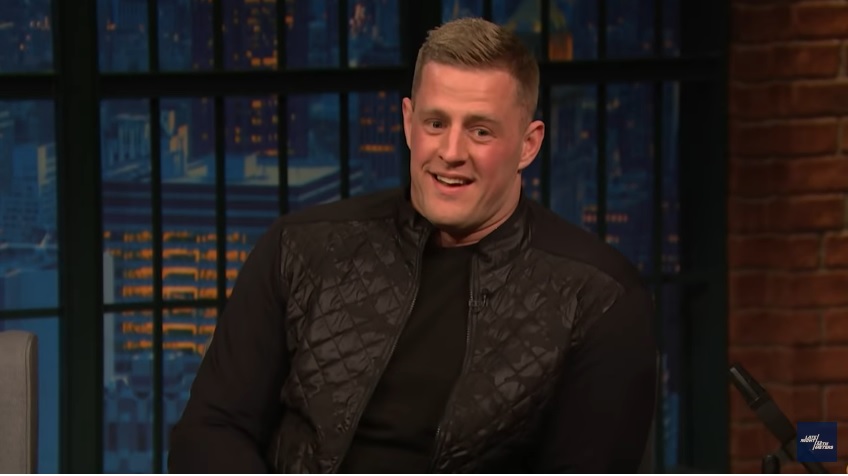 Make that the third time this season the Pittsburgh Steelers have been called The Kardashians by an NFL player. First it was Jesse James. Then T.J. Watt. And most recently, J.J. Watt, who made the comment on a recent appearance with Late Night With Seth Meyers.

Meyers, a well-known Steelers’ fan, steered the conversation in that direction, noting all the problems this offseason around Antonio Brown. Watt said he’s gotten the inside scoop from his younger brother.

“It does seem very dramatic,” Watt said appearing on Thursday night’s show. “It’s like someone is watching the Kardashians And I can call one of the Kardashians. I’ll call my brother, see everything on TV, and be like ‘ok, give me the real story.’ And yeah, it’s pretty wild.”

That’s where they left the conversation, avoiding spilling any details or storylines outside of the obvious chaos that seems to happen on a weekly basis. But Watt’s reaction, captured in the above photo, was one that seemed to say, “Glad I’m not part of that.”

The franchise’s reputation has certainly been dinged over the last year. Instead of the focus being on their success, it’s shifted to gameday failures and drama off the field. Two of the team’s best players, Antonio Brown and Le’Veon Bell, have very uncertain futures and it’s more than possible – likely, even – both aren’t in Black and Gold come the start of 2019.

Positive press has been hard to come by whether that’s hearing from players around the league, like Watt, current Steelers, or past ones, like Bill Cowher, Hines Ward, or Jerome Bettis. It makes 2019 even more important. Not just to win, not just to turn around the on field product, one that woefully underachieved last year, but to fix their smudged reputation. To be thought of winners, not a sideshow curiosity. Or else the rest of the league will point and laugh.

Check out the interview below. The Steelers discussion is the first topic.