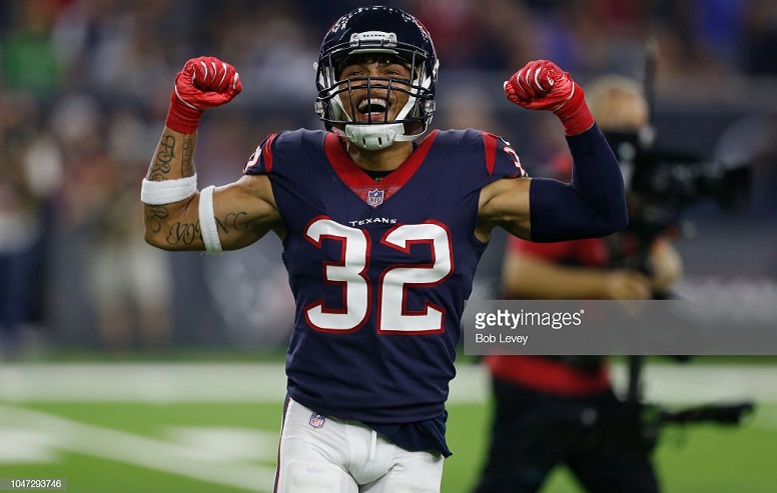 The 2019 free agent signing period will begin five weeks from today and fans of the Pittsburgh Steelers can only hope that the team will be a little bit more active this offseason than they normally are during the first few weeks and especially when it looks like they’ll have a bit more available salary cap space to go shopping with this year. One player who could and should be on the Steelers usual short list of targeted unrestricted free agent this March is Houston Texans safety Tyrann Mathieu.

The Steelers obviously could have gone after Mathieu last offseason during free agency but with them being tighter against the salary cap and the LSU product and former third-round draft pick of the Arizona Cardinals mainly looking for a team that would pay him a more than reasonable one-year price so that he could increase his future worth in 2018 for one potential final big payday in 2019, it’s not surprising that the do-everything defensive player landed with the Texans.

Mathieu, who will turn 27 in May, definitely gave the Texans their $7 million’s worth in 2018 as not only did he start all 16 regular season games, he also matched his career high in total tackles with 89 and also registered a new career high in sacks with 3 to go along with 2 interceptions, 8 passes defensed, 4 quarterback hits, and a fumble recovery. If you watched a fair amount of Texans games from this past season, you also saw Mathieu play multiple positions all over the field and that includes some outside cornerback, slot cornerback and inside linebacker in addition to both safety spots. Just go look at the tape and you’ll see just how much he moved around in that Texans defense.

“In one season in Houston, Mathieu quickly elevated himself to a team leader, recently wrote Turron Davenport, who covers the Texans for ESPN.com. “He brought a veteran presence to the Texans’ secondary and served as a mentor for future star Justin Reid. The ability to move Mathieu around enhances the defense against both the run and the pass.

Not only that, Mathieu quickly become a team leader in Houston, he as very active with the local community charities and specifically with the Boys & Girls Clubs of Greater Houston. Several Texans beat writers have praised Mathieu’s character and how he carried himself in 2018 and even in articles written after the season ended.

One of the knocks on Mathieu early in his NFL career was that he couldn’t keep himself healthy. In fact, he missed 14 games due to injuries during his first four seasons in the NFL with the Cardinals. Now that he’s played in all 16 regular season games two consecutive years, the injury concerns with him have seemed to have quieted down.

Steelers head coach Mike Tomlin and general manager Kevin Colbert both know quite a bit about Mathieu already. Not only were the two at Mathieu’s 2013 LSU pro day to see him and spend time with him, the two have since talked very glowingly about the player over the years when asked about him during various interviews. In fact, Colbert even brought up Mathieu at last year’s NFL scouting during an interview on SiriusXM NFL Radio when asked to talk some about the nickel slot position in today’s NFL defenses and how that’s a position the Honey Badger perfected during his 2017 season with the Cardinals.

“That’s a starting position and it goes back to a man in Arizona, Honey Badger,” Colbert said during that previously referenced interview. “Yeah, Tyrann, he kind of established that position.”

If indeed Colbert and Tomlin are interested in signing Mathieu come March to potentially play the dimebacker role and more in the Steelers defense in 2019, the player will first need to make it to free agency. The Texans have a pile of salary cap space to play with this offseason and there’s no reason to think that they won’t make a strong run at re-signing Mathieu within the next five weeks. Even Mathieu has indicated since the 2018 season ended that he’s open to re-signing with the Texans.

“Obviously, I’m going to take some time, really reflect but like I said, I really want to be here,” Mathieu said in early January after the Texans were eliminated from the playoffs, according to the team’s official website. “I love this team, love the locker room, love the coaching staff so hopefully the business side will take care of itself but definitely want to be here.”

That quote above aside, just 10 days after uttering those words in the Texans locker room, Mathieu posted a very interesting tweet on Twitter.

“Getting money is cool, but I want a ring,” Mathieu tweeted on January 20.

Getting money is cool, but I want a ring.

It’s no secret that current Steelers players wouldn’t mind having Mathieu resume his career in Pittsburgh as evidenced by last year around the beginning of free agency when defensive linemen Cameron Heyward, cornerback Joe Haden and inside linebacker Ryan Shazier were seemingly recruiting the then still unsigned free agent via their social media accounts.

However, in lieu of gong after Mathieu last year during free agency, Colbert did his usual March free agent dumpster dive and emerged from it with safety Morgan Burnett and inside linebacker Jon Bostic as his prized bargain finds complete with pedigree. Burnett unfortunately went on to not only miss several games due to injury, he wasn’t a huge play-maker when he was on the field, which was mostly as a dime package box defender. He apparently didn’t like how he was used in his first season in Pittsburgh and reportedly has already asked to be released in the next five weeks. The Steelers should oblige his request sometime within the next five weeks.

As for Bostic, while he was far from a bust in his first season in Pittsburgh, he is what he’s always been since entering the NFL in 2013 as a second-round draft pick and that’s an inside linebacker that’s good against the run but not one that you want covering a player with any above-average athletic ability out in space or down the field very often. At least he stayed healthy in 2018 and signed a very reasonable contract.

If Burnett is indeed sent packing in the next few weeks and the Steelers indeed get their planned contract extension done with quarterback Ben Roethlisberger by early March, those two moves combined will free up enough 2019 salary cap space that can be used to go after Mathieu and a few other free agents with. Signing Mathieu would still allow the Steelers to attack the inside linebacker position at some point during the early rounds of the 2019 NFL Draft in addition to the cornerback position. This team has too many upgrades needed this offseason and not all of them can properly be addressed in one draft.

Obviously, if you were to place bets on the Steelers chances of ultimately signing Mathieu this offseason, you would be best served betting against it happening. That said, the Steelers are in a much better position to go after Mathieu with a long-term and lucrative free agent contract offer than they were a year ago. Make no mistake about it, if the Texans dont get Mathieu re-signed before the start of the free agent signing period there will likely be multiple teams looking to throw money at the do-it-all defender so the Steelers will need to get in line. However, of the teams that will likely show the most serious interest in Mathieu, the Steelers, if one of them, will likely be one of the few that can give him a legitimate shot at getting that Super Bowl ring that he seeks.

Maybe the Honey Badger won’t really care who he signs with in the coming months as long as the money is really good and maybe the Steelers, just like a year ago, won’t care about making a serious run at the Honey Badger should he indeed hit free agency again. All that said, it would be nice to see Colbert finally do some serious honey badger-like attacking of defensive players who can immediately help that side of the football. Those kind of players aren’t usually found in a free agent dumpster dive, however.