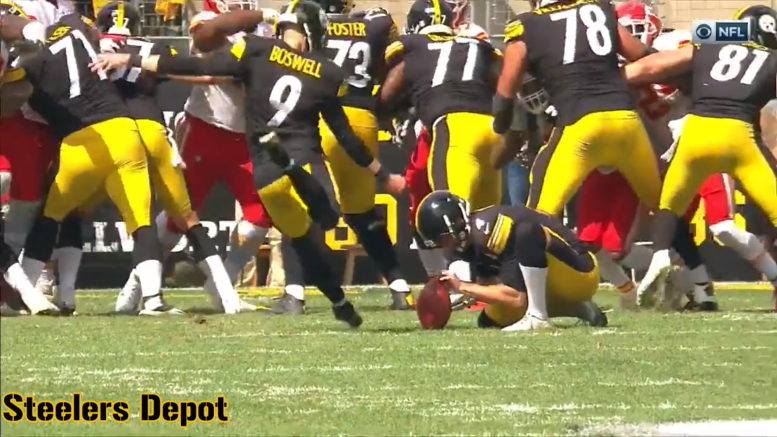 A chance to compete. An opportunity to be the Pittsburgh Steelers’ starting kicker. Those are the guarantees given to Chris Boswell. Nothing more, nothing less. Speaking to the media earlier today, Kevin Colbert confirmed Boswell will be part of the team’s training camp roster. But with a healthy amount of competition around him.

Steelers still believe K Chris Boswell can return to form and he will be brought to camp, but so will they bring another 1 or 2 kickers

The tricky part of this situation is the fact Boswell is owed a $2 million roster bonus in March. But the Steelers are banking on the Boz of old returning, the elite level kicker who earned his long-term deal prior to 2018’s colossal disaster.

And what a disaster it was. There was the bad, missing seven of his 20 field goal attempts to the downright ugly, slipping and falling in the loss to Oakland. By season’s end, injury was added to insult, Boswell suffering a groin injury in warmups against New Orleans that had him on IR before the season finale.

Pittsburgh has said several times this offseason they’re going to add competition. Matt McCrane is still on the roster with a contract that runs into 2019. He’s very likely not the answer at kicker, a weak leg hurts him on long field goals and kickoffs, but it sounds like he could at least be in camp. And Colbert sounds open to bringing in another kicker during free agency or the draft, meaning there could be three kickers on the training camp roster. Last year, they only had The Boz.

Some free agent kickers include Matt Bryant and Kai Forbath, the latter brought in for a workout to push Boswell during the season. Forbath went 4/5 on field goals in three games last year with the Jacksonville Jaguars. The top kickers in this year’s draft include LSU’s Cole Tracy, Utah’s Matt Gay, and Oklahoma’s Austin Seibert. The team will probably also have a close eye on the AAF kickers, though the fact they’d be kicking all year and risking fatigue could actually hurt their value.