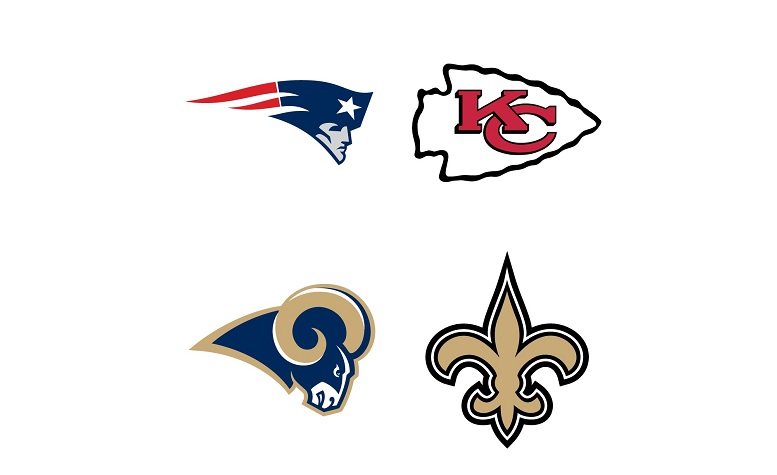 The 2018-2019 NFL season conference championship games are now set and this year both contests will feature the top two seeds.

The Chiefs advanced to the AFC Championship game on Saturday with a 31-13 home win over the Indianapolis Colts. Chiefs quarterback Patrick Mahomes completed 27 of his 41 total pass attempts in the game for 278 yards. While Mahomes did not have a touchdown pass against the Colts, he did have one of the Chiefs four rushing touchdowns in the game. The other rushing scores came from running backs Damien Williams and Darrel Williams and wide receiver Tyreek Hill.

The Chiefs defense sacked Colts quarterback Andrew Luck three times on Saturday and also forced and recovered a fumble. Additionally, the Colts offense was 0-9 on third downs against the Chiefs defense.

The Patriots advanced to the AFC Championship game on Sunday with their 41-28 home win over the Los Angeles Chargers. Patriots quarterback Tom Brady completed 34 of his 44 total pass attempts for 343 yards and a touchdown in the win and the New England offense compiled 155 net rushing yards with rookie running back Sony Michel being responsible for 129 of them on 24 total carries. Michel also registered 3 rushing touchdowns in the game while fellow running back Rex Burkhead also had a score on the ground. Wide receiver Julian Edelman chipped in 9 catches for 151 yards and wide receiver Phillip Dorsett caught Brady’s only touchdown pass in the game.

The Patriots defense harassed Chargers quarterback Philip Rivers quite a bit during Sunday’s game on the way to sacking him twice and intercepting him once. Rivers finished the game with 331 yards passing and 3 touchdowns and the interception on 51 total attempts. The Chargers offense also only managed 19 net yards rushing against the Patriots defense.

On the NFC side, the Los Angeles Rams advanced to their conference’s championship game on Sunday with a 30-22 home win over the Dallas Cowboys. Rams quarterback Jared Goff threw for 186 yards on 28 attempts in the win. All three of the Rams offensive touchdowns on Saturday came on the ground with running back C.J. Anderson being responsible for two of them. Anderson, a late-season add by the Rams, rushed for 123 yards on 23 carries against the Cowboys while fellow running back Todd Gurley chipped in 155 yards and a touchdown on his 16 total carries.

Rams kicker Greg Zuerlein kicked three field goals in his teams win and the Los Angeles defense only allowed the Cowboys offense to convert 1 of their 10 total third down opportunities in the game in addition to allowing Dallas to rush for just 50 net yards. Cowboys quarterback Dak Prescott was sacked once by the Rams defense on his way to throwing for 266 yards and a touchdown. Prescott also had a late rushing touchdown with 2:11 left in the game.

The New Orleans Saints were the last team to sew up a spot in the final four and that happened Sunday night thanks to their 20-14 home win over the Philadelphia Eagles.

After throwing an interception on his first pass attempt of the game, Saints quarterback Drew Brees went on to complete 28 of his 38 total pass attempts for 301 yards. Brees threw two touchdown passes on Sunday with one going to wide receiver Keith Kirkwood in the first half and the other going to wide receiver Michael Thomas which put the Saints ahead for good with 1:40 left in the third quarter. That Scoring drive, by the way, went 92 yards in 18 plays and used 11:29 in clock time. Thomas ended with 12 receptions for 171 yards and the touchdown and the Saints registered 137 net yards rushing against the Eagles defense with running back Alvin Kamara responsible for 71 yards of that on 16 total carries.

Saints kicker Wil Lutz kicked two field goals in the game and the Saints defense intercepted Eagles quarterback Nick Foles twice during the game with the final one coming with 2:01 left in the fourth quarter and the Philadelphia offense attempting to drive for a game-winning score. Saints cornerback Marshon Lattimore recorded that game-saving interception after the pass first went through the hands of Eagles wide receiver Alshon Jeffery. Foles, who has now probably played his last game in an Eagles uniform, finished Sunday’s contest with 201 yards passing with a touchdown pass and the two interceptions.

Both conference championship games will take place next Sunday with the first one being the Saints hosting the Rams at 3:05 PM ET. That game will be followed by the Chiefs hosting the Patriots at 6:40 PM ET. The winners of those two games will meet in Super Bowl LIII at Mercedes-Benz Stadium in Atlanta, Georgia on Sunday, February 3.