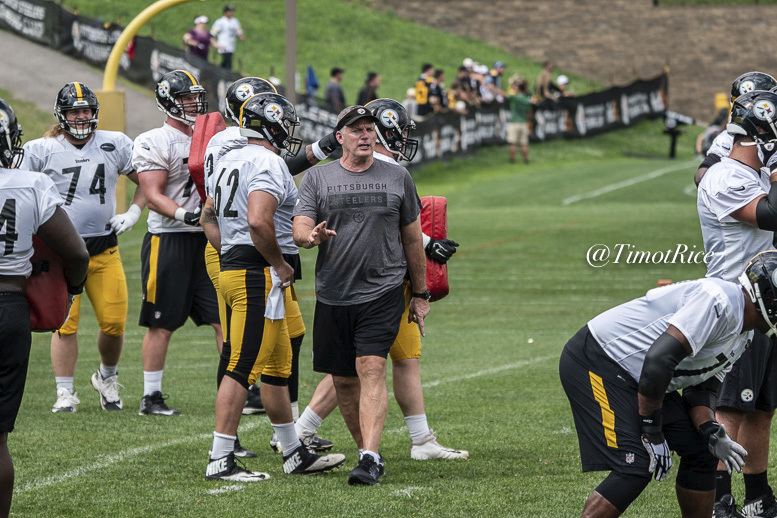 It wasn’t fun to read the headline that was sending Mike Munchak west to Denver. Losing him is a blow to a Pittsburgh Steelers that’s had to deal with, or will deal with, plenty of them this offseason. But the only reason why this loss stings so much is because how phenomenal of a coach he is. Ultimately, that’s how I’ll choose to remember his time in Pittsburgh.

Five years spent as a Steeler, time spent as arguably the best offensive line coach in football. The year before, the organization was coming off an 8-8 record where Ben Roethlisberger was sacked 42 times, comfortably in the top ten in the league. The coach who predated Munchak, Jack Bicknell Jr, was an abject disaster, shown the door almost as quickly as he entered.

Enter Coach Munch. The man who helped turn it all around.

From that 40 sack season, Roethlisberger’s yearly sack totals since.

Among the lowest in football. Credit should be spread around, including to Roethlisberger, whose game needed to evolve and did – no longer is he Backyard Ben -, but Munchak played an obvious role.

What’s most impressive about his coaching ability is his effectiveness and ability to work with linemen regardless of background. He elevated the likes of David DeCastro and Marcus Gilbert. High draft picks, sure, but after you put on the hat and take some photos, draft status doesn’t mean much anymore. He took afterthoughts like Chris Hubbard, Alejandro Villanueva, and B.J. Finney, all undrafted players, and helped build their careers. Hubbard and Villanueva earned monster paydays because of that. In time, Finney may be able to say the same.

His ability to relate to his guys was simple. A true teacher buoyed by a Hall of Fame resume. Players look at coaches a little differently when they have a gold jacket hanging in their closet. But that alone doesn’t make for a good coach. He showed the ability to translate what was in his mind in a way anyone could understand, a rare trait. He wasn’t cocky, arrogant, and at camp, not someone you would hear yelling. But his demands were high, teachings firm, simple coaching points like keeping your shoulders square and exploding out your first two steps. Above all, there was mutual respect between player and coach.

“With his ability to connect with guys and the reputation he has and the respect he commands,” tackle Marcus Gilbert told The Trib last year. “He’s a big reason why we are who we are.”

That feeling was instilled almost immediately. Kelvin Beachum discussed the hire two months after Munch was brought on board.

There’s respect as a person, not just a coach. Munchak is known for his fierce loyalty. He was fired in Tennessee after being given the chance to remain as head coach. But that meant scapegoating assistant coaches. Munchak refused and was let go. Even his decision to leave to Denver was through loyalty to family, the chance to be closer to them. The only thing that could’ve pulled him away from Pittsburgh, turning down head coaching opportunities in Arizona and Miami along the way.

But his players were an extension of his family. That’s why they loved him, played so hard for him, why it’s so difficult to see him leave. Couple top talent with top coaching and you get the results the Steelers have enjoyed for several years – one of the league’s most successful offensive lines.

There are almost too many linemen to count who will thank Munchak. Ben Roethlisberger should thank him. Ditto Mike Tomlin and his replacement, Shaun Sarrett. And a huge thank you from Steelers’ Nation. Munchak may be leaving but his teachings and the results he’s produced will be felt for likely the rest of the Roethlisberger era.