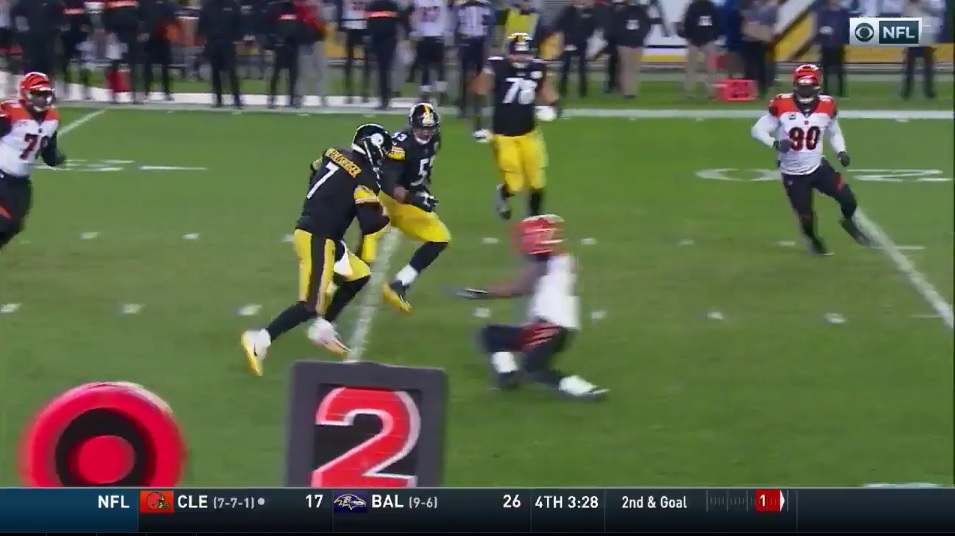 Things didn’t go the Pittsburgh Steelers way following the Week 17 16-13 win over the Cincinnati Bengals, as the Baltimore Ravens beat the Cleveland Browns 26-24 to clinch the AFC North and head to the AFC playoffs. After that, things have taken a dramatic turn as the Antonio Brown saga has taken a turn few expected to see.

Let’s take a look at the final missed tackles report of the season, which will include season total percentages.

Now, with the Bengals game, nobody really jumped out with misses, as five different players recorded a miss in the win. Down the stretch the Steelers tackled really well, rarely missing tackles that resulted in big plays, sans the New Orleans Saints game.

Late in the second quarter near midfield, the Bengals tried to run a read-option with quarterback Jeff Driskel. Pittsburgh had a stunt on up front with Hargrave and Tuitt, which allowed Hargrave to work past blockers right into the path of Driskel.

However, Hargrave is moving to his right with force, which allows Driskel to stop and cut up inside of Hargrave’s path, resulting in a missed arm tackle by the standout third-year nose tackle.

After Hargrave’s miss, TJ Watt comes in from behind and forces a fumble on Driskel that the Bengals are fortunate to recover.

Later in the game, with the Steelers holding a 13-10 lead early in the fourth quarter, the Bengals saw Joe Mixon rip off a 51-yard run that put the Bengals in scoring position right away.

Mixon does a nice job of being patient to start the run, waiting for a hole to open up before bursting through that hole. From there, Mixon uses his speed to destroy any angle that safety Jordan Dangerfield has on him, resulting in a missed tackle. That then leads to a putrid effort from Terrell Edmunds late in the run, allowing Mixon to toss him aside with his left arm with ease, picking up a handful of additional yardage at the end of the run.

JuJu Smith-Schuster and James Conner ran well with the ball in their hands on Sunday, forcing three missed tackles each to lead the Steelers.

On Smith-Schuster’s touchdown catch, the second-year receiver uses his stiff arm to shed KeiVarae Russell on his 11-yard touchdown. He’s not the fastest, and he’s certainly not the most elusive, but he has a knack for shedding tackles in space.

Then there’s Conner, who led the Steelers with 65 forced misses on the season while missing three games.

When in space, Conner is a nightmare for defenders. He changes directions quickly and always keeps his legs churning, forcing defenses to gang tackle him.

On this short catch in the fourth quarter, Conner uses his speed to get through Nick Vigil’s tackle, and then sets up an errant attempt by Shawn Williams, stopping short to let the physical safety fly by for the second miss on the play.