While Antonio Brown has hogged the social media spotlight since the Pittsburgh Steelers’ season ended – we’re still waiting on that promised interview, by the way – Le’Veon Bell jumped back into the mix with a possibly veiled criticism.

Commenting on a Bleacher Report Instagram post pointing out all the aggressive moves the Los Angeles Rams made this year, Bell said it was the right decision. Better than “saving” for the future. 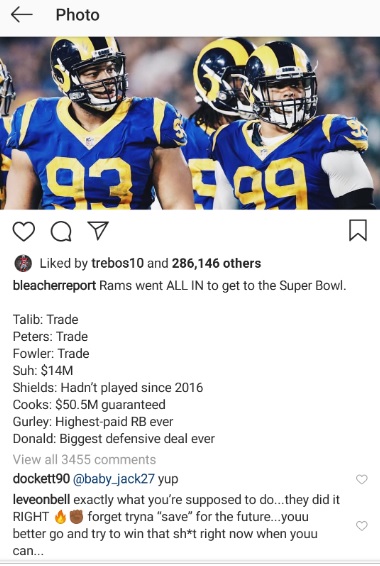 That comment is a little more pointed since the Rams ponied up and made Todd Gurley the highest paid back in football whereas the Steelers ultimately didn’t land a deal with Bell.

And largely speaking, the Steelers haven’t been incredibly aggressive in free agency or in trades too, at least, not like the Rams. Kevin Colbert makes deals during the summer but they’re for Ryan Switzer or J.J. Wilcox. Not Marcus Peters or Aqib Talib, their two starting corners, or Dante Fowler at the trade deadline, who pressured Drew Brees into throwing an OT interception that led to the Rams victory and Super Bowl trip.

Heck, it was reported – and then essentially confirmed by the team – the Rams had plans to trade for Khalil Mack even though they couldn’t afford him. They were going to ink him to a long-term deal and then trade him after this season.

“The Los Angeles Rams made a pitch to acquire premier pass rusher Khalil Mack with the intention of giving him a raise this season, then dealing him at the end of the year to recoup some if not all of the draft compensation they gave up, according to sources.

The team’s thinking, according to sources, was to go all in this season, then — because of financial constraints — deal Mack away after the season and recoup what they had dealt for him. The idea was to match Mack with Donald, Ndamukong Suh and Michael Brockers, and bolster their chances even more this season.”

Pittsburgh has had their moments, notably signing Joe Haden before the start of the 2017 season, but it’s fair to be frustrated as a player for the front office’s more “long-term” approach. But right or wrong, nothing close to the plans the Rams have shown.

If there is a time for this franchise to be aggressive, it’s now. They’ll have more cap space than normal, not a ton of draft capital, and time running out for the Steelers to make a serious Super Bowl push. Ben Roethlisberger isn’t getting younger, the offensive line is only going to be together for so long, and the window to win is now. That will likely be without Bell. As Art Rooney II hinted at last week, they’re not likely to place either tag, the franchise or transition, though he said they will reach out to Bell’s camp in the coming weeks.