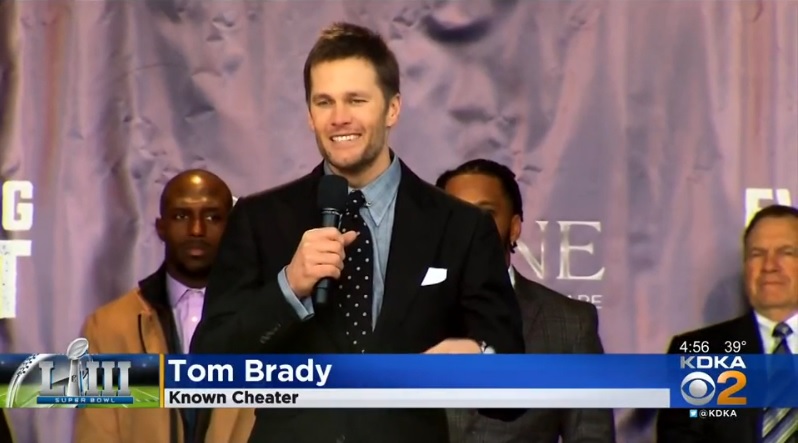 The hero we needed, not necessarily the one we deserved. An update from a story I’m sure you saw going around on the Interwebz earlier this week. The employee who slyly edited a chyron of Tom Brady calling him a “known” cheater” has been fired.

KDKA released the following statement about the situation today.

“While fans are entitled to have personal opinions, we have a journalistic responsibility to provide unbiased reporting. The graphic that appeared Monday violated our news standards. The individual who created the graphic no longer works for KDKA-TV.”

Here’s video of the original incident, courtesy of Deadspin, in a short story of Brady and the Pats getting ready to leave for Atlanta.

Brady, of course, was the Patriots’ starting quarterback during “Spygate” and its much dumber cousin, “Deflategate.” The former led to the Patriots being fined heavily and losing a first round pick after it was discovered they illegally filmed opponent’s signals to gain an advantage during games.

For some Steelers’ fans, that’s made Brady a cheater and tainted the five Super Bowl rings he has. He’ll look for his sixth, which would tie the Patriots with Steelers for all-time Lombardi’s, this Sunday against the Los Angeles Rams.

Ok, ok. It’s probably the right move to fire the (wonderful) person who did this because of integrity and journalistic standards. Blah blah blah. All I know is this made my week and the only thing that’ll top it are the Rams beating the Pats this weekend. That’s a graphic we can all agree on.