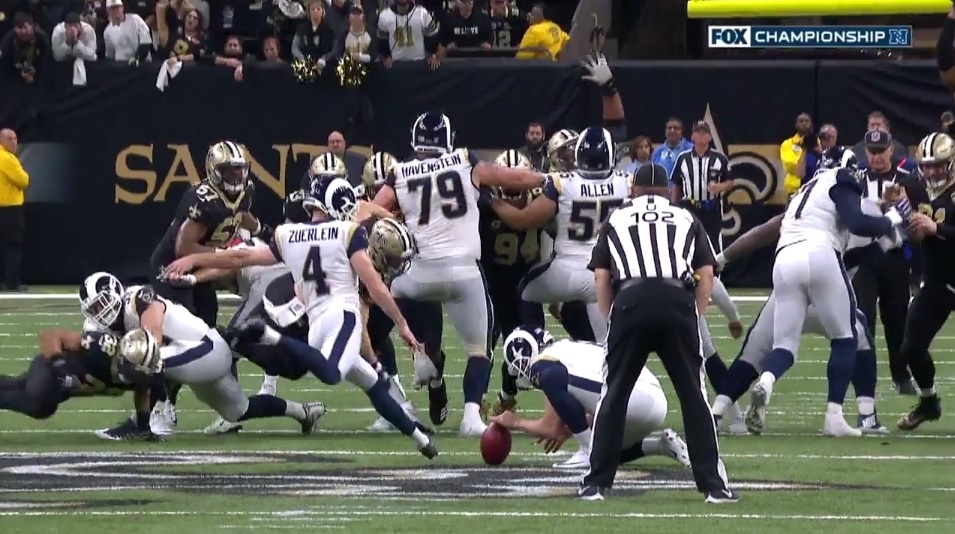 Stellar quarterback play got the Los Angeles Rams and New England Patriots to the Super Bowl. Everyone knows that if you don’t have your guy under center, you’re not sniffing a Lombardi. But when each team has that advantage, as did the final four this past weekend, wins and losses come down to everyone else. This week as much as any was a reminder that kickers are people too. And they’re awfully important.

In both games Sunday, kickers went a perfect 21-21, as this tweet from Michael Lopez broke things down.

As noted, that included three of the most crucial kicks of the season. The Rams’ Greg Zuerlein hit from 48 yards out to tie the Saints at 23 at the end of regulation. He followed that up by splitting the uprights from 57, that if you watched it, it would’ve been good from 70, to win it in overtime.

Though it came in defeat, the Chiefs’ Harrison Butker wasn’t bothered by the Patriots trying to ice him. He connected from 39 yards to send the game into overtime. For the victors, Stephen Gostowski made his lone field goal from 47, no easy kick, and hit all four of his extra points.

For the Rams and Patriots, those performances carried over from the regular season. Zuerlein hit 27 of his 31 tries on field goals, two of his misses were from 50+, with only one failed extra point. Gostowski was in an almost identical boat, 27 of 32, with one failed XP.

Look at it this way. The last team to miss just one field goal and win a Super Bowl? The 2006 Indianapolis Colts, who beat Rex Grossman’s “offense” in Super Bowl XLI. You’d have to go back to 2002-2003 to find the last winner to miss two field goals and still hold the Lombardi by game’s end.

So kicking matters. Obviously. And we are all painfully aware of how much it hurt the Steelers, to bring things back to Pittsburgh, and how it has to be corrected for 2019. That thought wasn’t lost on current players either. I’m not going to say it was a shot at Chris Boswell but L.J. Fort tweeted how important kickers are.

All 4 teams today have elite kickers 👌

Art Rooney II recently implied Boswell will be kept into training camp, meaning the Steelers will pick up his roster bonus due in March, but his roster spot is obviously not secured. The organization would be wise to bring in competition in the offseason if for no other reason, to keep the stakes high and push Boz to respond, as he did when the team brought in Kai Forbath for tryouts late in the regular season.