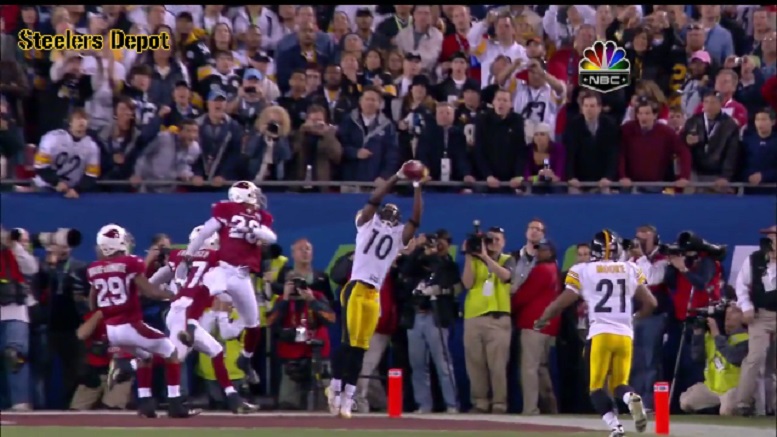 Friday will mark the tenth anniversary of the Pittsburgh Steelers win over the Arizona Cardinals in Super Bowl XLIII and with that, we can probably expect several key plays from that game that was played in Tampa, FL to be all over social media and the television for the next 24 hours. Recently, new Tampa Bay Buccaneers head coach Bruce Arians, who was the Steelers offensive coordinator from 2007-2011, was asked to reminiscence some about that Super Bowl XLIII win over the Cardinals and particularly the game-winning drive that included the amazing 6-yard touchdown pass play from quarterback Ben Roethlisberger to wide receiver Santonio Holmes that he called with 35-seconds left in the contest.

“I never repeat plays in a game,” Arians recently told Martin Fennelly of the Tampa Bay Times. “But we were in the red zone. We had used everything. That play was Ben’s No. 1 pick, so we went back to it. 74 Scat Flasher Z Level. 74 scat is the protection, so we free release the back. The linemen slide away and the back would be hot in the flat. Hines Ward would be coming across to try to pick for that back or sit down in zone. Santonio ran a corner route behind him.

“The thing was designed to go to the flat. They played zone. Ben pumps it so hard I thought the ball was going to come out of his hands for Hines. Santonio gets a lot of credit for that catch, but that throw was unbelievable. To get it over the corner’s head and put it in a position where Tone can just catch it. He was the third read. It was all great throw.”

It was indeed a great throw by Roethlisberger and an amazing catch by Holmes, who just managed to get both feet down in bounds in the end zone after securing the football that had just cleared the leaping effort by Cardinals defensive back Ralph Brown. 10 years later that play still remains one of the top ones in Super Bowl history and will likely remain one of them for several more years to come.

As for Arians saying that winning touchdown pass play was a repeat of one run earlier in the game, he is indeed correct and that’s obviously not new information. In case you didn’t already know it, the Steelers offense attempted to run that same 74 Scat Flasher Z Level play late in the third quarter and on 3rd down and goal from the Cardinals 9-yard-line. That play, however, broke down fairly quickly and almost ended with Roethlisberger being sacked by defensive end Bertrand Berry. Roethlisberger, however, was able to throw the pass away to left and out of bounds as Berry was in the process of tackling him.

While that Steelers drive was ultimately extended thanks to an unnecessary roughness penalty on the Cardinals during the short fourth down field goal attempt by kicker Jeff Reed, the offense still failed to finish it with a touchdown in their next three plays and had to finally settle for 3-points to put Pittsburgh ahead 20-7 with 2:16 left in the third quarter.

Early in the fourth quarter the Cardinals offense managed to put together a touchdown-scoring drive of 87 yards and another one 64 yards after first scoring a safety when Steelers center Justin Hartwig was called for holding in the Pittsburgh end zone with 3:04 left in the fourth quarter. After the Cardinals finally took a 23-20 lead with 2:47 left in the game, Roethlisberger and the Steelers offense took the field once again after having their last three possessions resulting in a total net loss of 6-yards on 8 total plays run.

During the Steelers 8 play, 78-yard touchdown-scoring drive that would ultimately win Pittsburgh their sixth Super Bowl championship, Roethlisberger connected with Holmes three times prior to hitting him from 6-yards out for the famous score. The third connection between the two players was an 11-yard throw to the right side that ended with Holmes gaining a total of 40 yards down to the Cardinals 6-yard-line after Arizona safety Aaron Francisco lost his footing while coming forward on his attempted tackle of the Steelers wide receiver. Arians certainly remembers that big play and wasn’t ashamed to admit to Fennelly that all the credit for that big gain goes mainly to Roethlisberger and of course Holmes.

“I didn’t have anything to do with it,” Arians said. “It was a play designed to go to Heath Miller. But Ben pumps it, hits Santonio, he spins out and gets the big gain. We needed a big chunk. Almost all of the plays from that are still in my head.”

Arians also added another tidbit about that Super Bowl XLIII-winning drive while wrapping up his thoughts on the subject.

“What people don’t realize is that Nate Washington, our flanker, had separated his shoulder and was really running out there one-armed. Hines’ knee had given out and neither one of them could really run or catch. We had Heath Miller and Santonio Holmes. I just kept telling (Ben) to pump left, then throw it to Santonio. That drive was what Ben did with the ball to get guys open.”

It certainly will never get old rewatching that game you’re up to it, you can as well below.