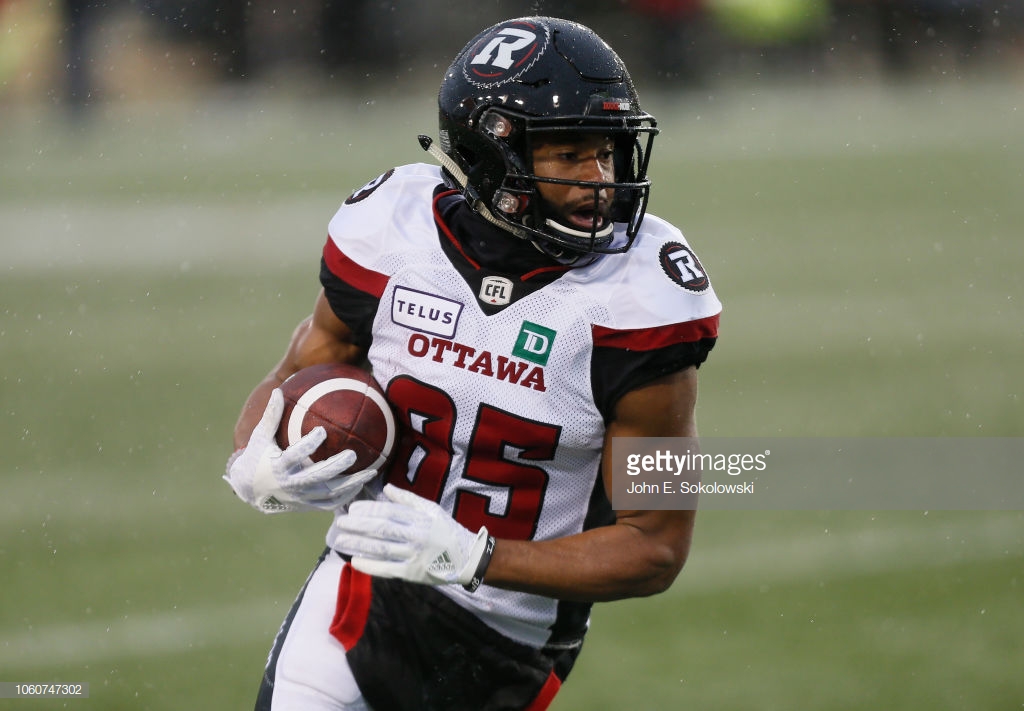 Looking at the second wide receiver the team signed over the past week – Diontae Spencer.

There’s an easy Steelers’ parallel to Spencer. A small, return-first CFL player who goes from longshot to making the roster? Sounds a lot like Stefan Logan, if Spencer can complete that last part. View Spencer less of a receiver and more of a return man, in the same way Logan and to a lesser extent – Dri Archer – was.

What he doesn’t offer in size he makes up for in speed. At the McNeese State 2014 Pro Day, he turned in a 4.34 40, 40 inch vert, and 10’3″ in the broad. A dynamic player on the field, Spencer became a multi-purpose threat in college. A leading receiver, punt, and kick returner.

As a senior, he totaled three return touchdowns, two on kicks, another on punts. Plays like this made him a constant threat for opposing coverage units.

In that game against Stephen F. Austin, Spencer racked up five total touchdowns. Two receiving, two on kicks, and one on punts, as McNeese State won in a 69-38 blowout. It led to one of the best seasons in recent school history. They upset Division One South Florida, topped highly ranked Central Arkansas, and knocked down #2 ranked Sam Houston State before falling in the playoffs to Jacksonville State.

He found the end zone 12 times in total that year, even tossing a touchdown pass for good measure, hearkening back to his high school quarterback days.

But he essentially had one year of production, not even used much in the return game until his senior season, and undersized from a small school, it was hard to get much NFL attention.

Spencer earned a rookie tryout for the Chicago Bears after going undrafted in 2014. He didn’t latch on there but found a temporary home with the then St. Louis Rams. His time there didn’t last long and by December, he moved onto the CFL, inking a deal with the Toronto Argonauts.

After signing with the Ottawa Redblacks in 2017, he finally broke out. That included a CFL record for all-purpose yards, all 496 of them to beat the Hamilton Tiger-Cats. Following the game, he gave his jersey to his mother, Vanessa.

“I know she’s watching back home. That’s my biggest fan. Growing up, single parent, she’s the reason I go so hard. I just want to give it to her just to show I am proud of her sticking with me throughout life and giving me the chance to be in this position.”

It felt like he was close to breaking back into the NFL following 2017. His eye-popping season up north earned him three pro tryouts with Baltimore, New Orleans, and Cincinnati. None ended with a contract. So he went back to Ottawa for one more year, finishing 9th in the league in receiving yards (1007) and 6th in punt return average (10.4). The Redblacks released him from his contract shortly before signing with the Steelers, making his full circle back to the NFL.

Expect him to be used as a punt and kick returner. He needs to show that type of versatility to have a chance to stick, just as Logan did a decade ago. It’ll be a tough task with Ryan Switzer around, established and sharing that same versatility, but maybe Spencer can make noise in camp and hang around on the practice squad. I’m excited to watch him.

The theme of the receivers brought in last year focused on special teams ability. Guys who had a background of being able to cover kicks and punts. And it worked out – Trey Griffey and Tevin Jones spent the entire year on the practice squad. The theme this year seems to be late bloomers. That’s what you can consider Ka’Raun White and Spencer. Maybe it’ll work out just as well this time around.

One last story on Spencer to check out. The CFL’s website produced a great feature video on him. Nine minutes absolutely worth watching.