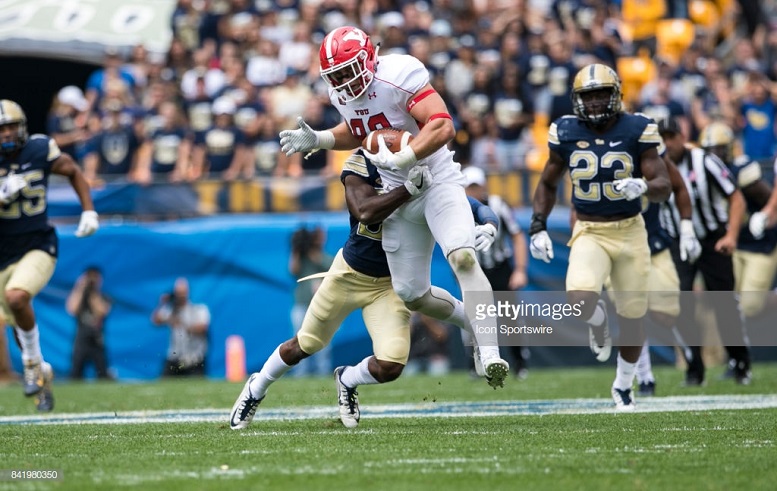 No, Rader is not a great athlete. Arguably not even a good one. And no, his numbers in college weren’t gaudy, though some of that blame falls on a run-centric offense. But Rader does have size and if he can perform well enough as a blocker, he’ll find a role in the Steelers’ offense. One where tight ends generally function the same way they did 20 years ago. In-line players, hard workers, dependable, strong blockers.

Rader is a local product by every definition. He attended Pine-Richland High School, tucked away just north of Pittsburgh, playing defensive end and tight end. Committing to the Penguins, he became a starter by his junior season. But YSU ran the ball about twice as often as they threw it, leaving Rader to never surpass more than 22 receptions in a season. One of his best games came against Pitt in 2017, his senior year. Dave Bryan compiled all six catches he had in the near-upset, a 28-21 overtime defeat.

New #Steelers TE Kevin Rader had 6 catches for 100 yards against #Pitt in 2017. Here are all 6 of them: pic.twitter.com/6bGmPqlJxB

The Green Bay Packers signed him as a UDFA after this year’s draft, just as they did DE Conor Sheehy, also inked to a futures contract by the team. He lasted throughout training camp but failed to catch a pass and was released at final cutdowns.

Cleveland worked him out twice this season. Once in September and again in mid-December, possibly setting up a futures deal. Maybe they offered and he chose the Steelers. Maybe not. Regardless, he’s here in Pittsburgh now. The tight end group is already sorta log-jammed. Christian Scotland-Williamson and Bucky Hodges were signed to a futures deal and hopefully he shows more development in Year Two. Jake McGee should be recovered from his torn Achilles suffered last spring and though Jesse James and Xavier Grimble are set to be free agents, Grimble is restricted but unlikely to be tendered, both could find their way back to the Steel City. Add in Vance McDonald and that’s potentially six tight ends right there before you add Rader’s name into the mix.

But to play devil’s advocate, most of those spots aren’t secure. Worst-case, all those names are on the offseason roster but only McDonald and James are locks. Scotland-Williamson wasn’t impressive in camp last season, who knows where McGee will be coming off a torn Achilles (arguably the worst common injury you can suffer these days), and Grimble has habitually underachieved.