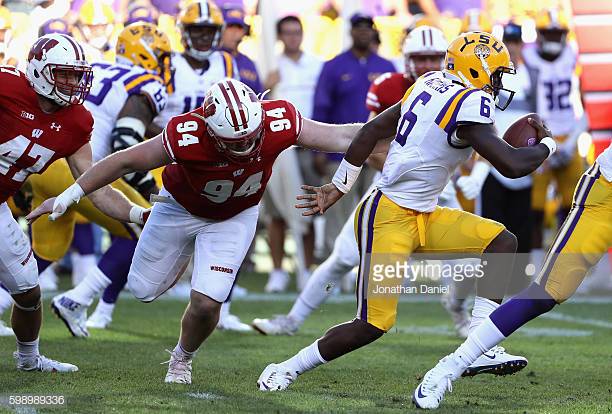 Sheehy looks as throwback as you can get. A big, 300 pound defensive linemen, the kind of guy who screamed “3-4 end” in 2002. A Wisconsin Badger, the same school that’s produced the likes of J.J. Watt and Beau Allen. A local product born in Milwaukee and decided to stay local, choosing red and white over Michigan’s maize and blue.

After playing sparingly his freshman season, he made eight starts his sophomore year in 2015. Six came at nose tackle, the other two at defensive end. There, he picked up his first full sack, taking down Troy QB Brandon Silvers in a 28-3 rout.

He became the full-time starter his junior year, notching 2.5 sacks while he recorded a season-high 35 tackles the following year. His stats don’t look very impressive. Just 13.5 TFL and six career sacks. But he was meant to be a space eater, to free up the slew of talent Wisconsin had at linebacker, Guys like Vince Beigel, Jack Cichy, and, of course, T.J. Watt. All three guys who went on to become draft picks, benefiting from what guys like Sheehy let them do.

At his Pro Day, he did test like a run-stuffing defensive linemen. Sheehy ran a 5.26 40, jumped 32 inches in the vert, and his 21 reps on the bar was a bit disappointing. Undrafted, he got the chance to stay local and with his families’ favorite team, inking a deal with the Green Bay Packers. Andy Herman, a Packers’ blogger, tweeted a solid scouting report on Sheehy shortly after he signed.

Sheehy has a chance as a rotational lineman who could specialize on run defense on early downs. He has his work cut out for him w/ the current depth on the line. pic.twitter.com/0q0GdUpQVl

He lasted the entire preseason, recording five total tackles. The Packers squared off against the Steelers in the preseason where Sheehy recorded one tackle – shown below – and one pressure.

But like most players we’ve discussed in this futures series, he was released at the end of the preseason. As far as I’m aware, he didn’t latch back onto anyone’s roster the rest of 2018.

On the surfact, Sheehy has this L.T. Walton feel. A little bit of versatility, hard-nosed defender against the run, and a guy you can probably count on to give top effort. But his ceiling is likely low and it’s difficult to see him doing more than making his case to land on the team’s practice squad.

New #Steelers DE Conor Sheehy had 6 sacks during his college career at Wisconsin and here they all are. pic.twitter.com/0VukKuxKyo