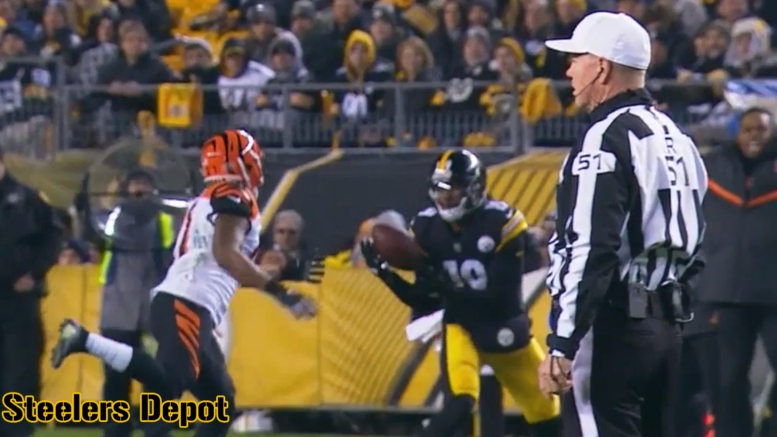 The Pittsburgh Steelers have been one of the cleanest teams in the NFL this season with respect to making good on the catchable targets that have come their way this season—mostly from Ben Roethlisberger, but also a handful from Joshua Dobbs, and even one from Chris Boswell and another from Antonio Brown.

According to ESPN, the Steelers finished tied for third in the NFL with a drop percentage of 2.5, meaning that they only dropped one out of every 40 catchable passes. In the season finale, I have two dropped passes and two others I want to take a look at, having JuJu Smith-Schuster and Jesse James down for drops.

Smith-Schuster’s drop came at the end of the second quarter. Ben Roethlisberger looked his way on a pass short right, trying to arc the ball over coverage. He did, but it doesn’t seem as though the receiver was expecting the ball to get through and perhaps lost it along the way. It bounced off his chestplate and incomplete.

In the fourth quarter, Smith-Schuster was also involved in the second play I wanted to take a look at, a would-be 14-yard reception that was challenged and reversed. This pertains to the old force-out rule which, in my opinion rightfully, no longer exists. While Smith-Schuster caught the pass, the defender was able to prevent him from getting his second foot down inbounds, resulting in an incompletion. Obviously not a drop but still a play I wanted to discuss.

With just under three minutes to go, Roethlisberger did an excellent job of scrambling away from pressure. He hoisted a deep ball down the field looking for tight end Jesse James, but the fourth-year tight end wasn’t able to elevate it and bring it on. I put this one down as a drop because he should have been able to climb the ladder here and finish this play. in fact, I don’t think there’s any debate on this one.

Last and least was this target on the next play to Vance McDonald. While the tight end is seemingly able to get the tips of both hands on the ball, safety Jessie Bates does nice job of playing the pocket, dislodging the ball before he is able to secure it.

This was reminiscent to the would-be touchdown Brandon Carr broke up against Smith-Schuster in the first game against the Baltimore Ravens back in Week Four, this this one wasn’t as close to being a catch. Not a drop, but a close call.