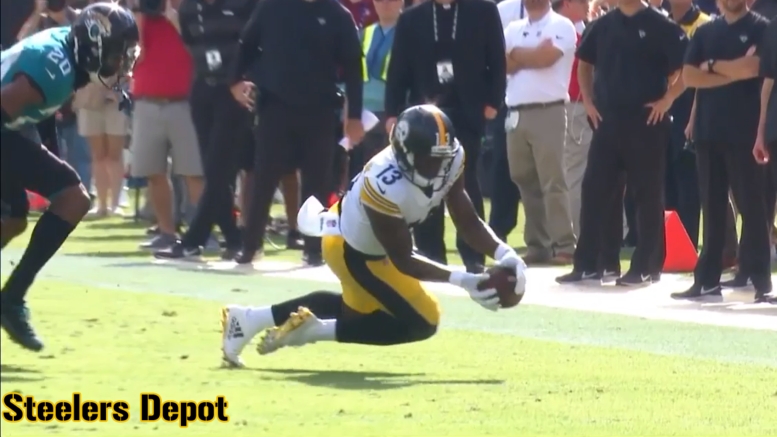 On Tuesday during the week, Pittsburgh Steelers quarterback Ben Roethlisberger was critical of rookie wide receiver James Washington for failing to catch a deep pass that he had in his hands. He questioned what the receiver was doing in leaving his feet, wondering if he trusted his hands or had confidence.

That same day, Head Coach Mike Tomlin was also asked during his pre-game press conference if Washington was going to dress for the team’s next game, and he strongly implied that that decision was far from being made. The rookie was previously inactive for one game, in which Justin Hunter played his role. Now Ryan Switzer is a bigger part of the offense.

For his part, however, Washington owned his error and said that the issue has nothing to do with his confidence, nor did he have any misapprehensions about the difficulty of transitioning from the college level to the NFL.

His most notable teammate in his room, Antonio Brown, voiced his support for the rookie as well. While he said that there are no excuses for whatever pressure he might feel as a high draft pick following recent rookie successes, he said that Washington only needs a chance to bounce back, and that he believes he would do just that.

Now the question becomes whether or not he does get that opportunity tonight as the Steelers play host to the Los Angeles Chargers in primetime at Heinz Field. The rookie has just eight receptions on 25 targets this season, but the only one of those failed targets that was legitimately a dropped pass was the one being discussed from last Sunday.

Washington is not somebody that the Steelers entrust to have a role on special teams, though neither is Hunter, so they both draw even there. And in terms of the emergence of Switzer, it can be somewhat difficult to determine how that would influence the debate between the rookie and the veteran.

If Switzer is to be the number three player at the position, then the role of the number four becomes less significant, which perhaps means that that player could be afforded more leeway in terms of a learning curve, and would have more limited assignments.

But they also might want a veteran to occupy that role, especially in the event of an injury, and Hunter is also capable of playing in the slot. He did confirm that he saw some time working with the first-team offense this week, which presumably has not been the norm.

Personally speaking, I would prefer to see Washington active and given a handful of snaps with a couple of targets. I would like to give him some easy completions and a deep shot to settle him in, but the team hasn’t seemed to show any interest in making things easy for him to get involved for whatever reason.