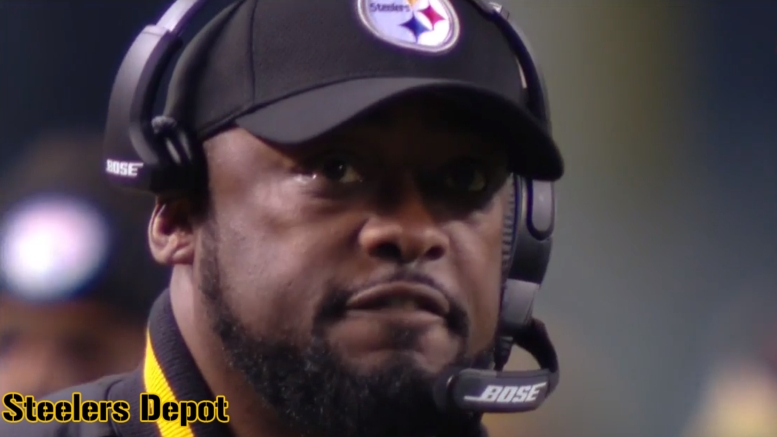 Usually when you talk about the Pittsburgh Steelers and cutting your eyelids off, you expect the topic to be about a late interception or fumble or a blown lead by the defense—or lately, a missed field goal. Maybe even an unwise challenge, or a blown coverage, or not having enough plays ready.

But the subject of cutting your eyelids off was invoked in a positive manner by Head Coach Mike Tomlin last night following his team’s big win over the New England Patriots that sent them to yet another winning record at 8-5-1 with two games to play, with the potential to finish the season at 10-5-1 if they can get through New Orleans and a battered Cincinnati team that is 2-7 in its last nine.

Obviously, the Steelers were coming off three consecutive losses to the Denver Broncos, the Los Angeles Chargers, and the Oakland Raiders. Frankly, they only narrowly beat the Jacksonville Jaguars the week before that as well. In each case, they held a fourth-quarter lead or at least shared it before the defense blew it.

In other words, they blinked. So how do you stop from blinking? As Keith Butler might say, you cut your dadgum eyelids off.

“It’s easy to display faith and talk that commodity stuff when things are going well”, Tomlin said. “Sometimes you got to cut your eyelids off when you want to blink when it gets thick and we talk openly about that. We try to display it and live it and you only get to do that in these types of moments, so you want to embrace those challenges”.

While the Steelers didn’t execute with perfection throughout the night, I do think it’s far to say that they never blinked. They played with great competitiveness and intensity from start to finish, aggressive on both sides of the ball, even if the results occasionally came up short. Had a couple of things gone differently, we could easily have been talking about a 24-point performance rather than 17, and it would be a different conversation.

The defense forced the Patriots to punt on five consecutive possessions after getting a freebie touchdown on their opening drive. They snapped the punt streak with a field goal, but their last two drives resulted in an interception and a turnover on downs.

Outside of the opening drive, New England didn’t manage more than 32 yards on any one possession until midway through the third quarter. They were able to move the ball late—even then one drive being hugely aided by an unnecessary penalty on third down—but this team clearly held its own.

Probably because they couldn’t help but keep their eyes on the game, with no eyelids to speak of.