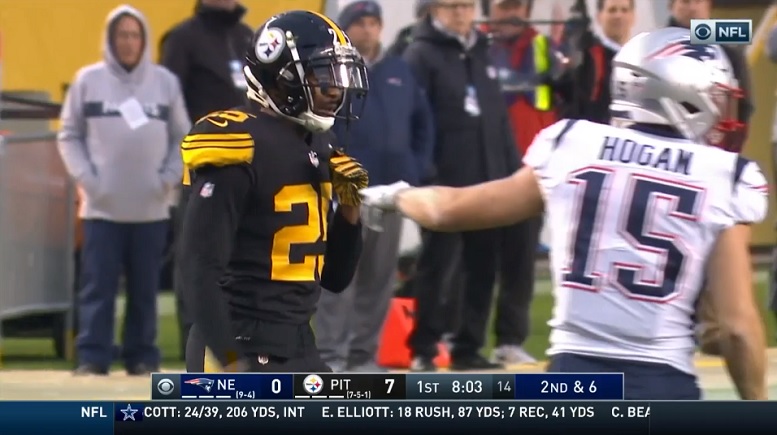 Even though he started and played for the first time in several weeks, Pittsburgh Steelers cornerback Artie Burns still didn’t play very many snaps in the team’s Sunday home win over the New England Patriots. In fact, after the Patriots first offensive possession that ended in a 63 yard touchdown pass from quarterback Tom Brady to wide receiver Chris Hogan, Burns seemingly didn’t see the field on defense the remainder of the contest.

After the game was over, Steelers head coach Mike Tomlin was asked if it was difficult for him to remove Burns from the game as quickly as he did.

“No, and that play wasn’t even his fault,” Tomlin said of Burns. “So, I think I want to be clear in saying that. That play that we gave up was not his fault. I accept responsibility that it’s our fault. I was too busy arguing a sequence of events prior to that, really, to make sure we had proper communication in that sequence. So we essentially spotted them seven [points].

“No reservations about that. Artie had a good week’s prep. Just really felt good about 24 [Coty Sensabaugh] and his ability to kind of do some of the veteran things that’s going to be required when you’re jockeying and playing a pace game versus a group like that. And so, appreciate Artie’s efforts, he had a good week’s work. Just as we got got into the game and particularly after we gave a play up early, I thought 24 with his veteran experience would be a little bit more steady.”

That big touchdown play the Steelers defense allowed to Hogan during the Patriots first offensive series will be broken down by Alex Kozora in the morning. However, the Steelers breakdown in coverage on that touchdown included three defenders running with Patriots wide receiver Josh Gordon while Hogan was left uncovered on a left to right crosser. After catching the football, Hogan then went untouched another 42 yards for the touchdown.

With Burns being removed from the game as abruptly as he was it sure made it seem like he may have been to blame for Hogan being so wide open. Even if he wasn’t at fault like Tomlin said after the game, the reason the head coach apparently removed him from the game sure makes it sound like there’s not a lot of confidence still in the team’s former first-round draft pick.

Burns recorded one tackle in the game and it came on the Patriots first offensive play.