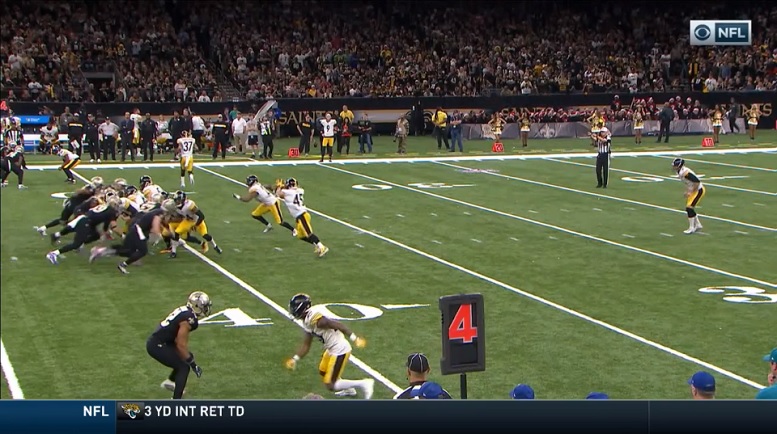 The Pittsburgh Steelers failed to convert a late fake punt attempt in their Sunday road loss to the New Orleans Saints and after the game was over head coach Mike Tomlin defended his decision to run the unsuccessful play in question.

“I just wanted to be aggressive,” Tomlin said during his post-game press conference when asked to explain his rationale of running that fake punt play. “I wanted to ensure that we had an opportunity to win the game. First of all, I liked the play, the concept. I thought we had a chance to get it. But I thought where the game was and the time in which was left in the game, I thought that if we did not stop them, that we will have an opportunity to have the ball last. And we did, but obviously unsuccessful nonetheless.”

The fake punt came on a 4th and 5 from the Steelers 42-yard-line with 4:11 left in the fourth quarter and the Steelers leading 28-24. The direct snap went to fullback Roosevelt Nix to the left side after the team’s up-back, safety Jordan Dangerfield, motioned out to the right. Nix attempted to run up the middle after getting the direct snap and while he did initially break through the line of scrimmage, he was ultimately tackled just short of the line-to-make.

Pittsburgh fakes the punt and the #Saints come up with a huge stop!#PITvsNO pic.twitter.com/u74mT1JBYC

Nix even celebrated like he had made the first down on the play only to be wrong. The Saints offense then took over at the Steelers 46-yard-line and quarterback Drew Brees then drove the unit on a 10-play drive for the go-ahead touchdown with 1:28 left in the fourth quarter.

Steelers quarterback Ben Roethlisberger also was asked to comment on Tomlin’s decision to go for a fake punt when he talked to the media after the game.

“That’s coach’s call,” Roethlisberger said. “Like I said, I didn’t know, I turned around just in time to see it. There’s obviously a reason that he called it, whether it’s a look, whether it’s a situation in the game, time, all of those things. I really don’t know what was going on, so I’ll always ride with whatever decisions coaches make.”