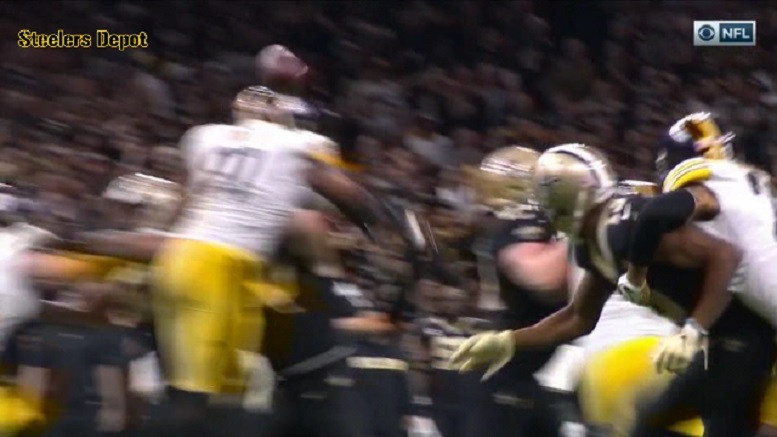 With two minutes remaining in the Pittsburgh Steelers Sunday road game against the New Orleans Saints a key play took place that a lot of people are still talking about on Tuesday afternoon.

That play, a short 4th down and 2 slant route pass from Saints quarterback Drew Brees to wide receiver Michael Thomas, fell incomplete and had the play ended there the Steelers might have went on to win the game. However, Steelers cornerback Joe Haden was flagged for pass interference on the play and the Saints drive stayed alive and ultimately culminated in a go-ahead touchdown several plays later.

Not only do several believe that the pass interference call on Haden wasn’t warranted, many also believe that Steelers defensive end Stephon Tuitt tipped the pass from Brees prior to said interference by Haden taking place. Steelers head coach Mike Tomlin was asked somewhat extensively about that play during his Tuesday press conference.

First, Tomlin was asked if he believes Tuitt tipped that pass from Brees after studying the game tape from Sunday.

After a brief pause and after Burt Lauten, the team’s Director of Communications, asked if any other media members had any more questions for Tomlin, the head coach let loose with another self-analysis of that play.

“But also don’t believe it was a DPI [defensive pass interference],” Tomlin said.

I have posted slowed and zoomed clips of the Brees pass as it flew by Tuitt’s arm and if you’re honest with yourself about it, you can’t conclusively say the football was at all tipped by the Steelers defensive lineman.

As for Tomlin thinking Haden shouldn’t have been called for pass interference, I think he might want to go back and study that play a few more times. For starters, Haden does grab and pull Thomas downward right as the wide receiver comes off the line. Sure, both players are hand-fighting on the get-off, but Haden still can’t pull him downward like he did. Additionally, it does look like he also interfered with Thomas while the ball was in flight as well.

Gene Steratore, a former NFL Referee and NCAA Official and current Rules Analyst for CBS Sports, has also since explained on Twitter that it was essentially holding by Haden that evolved into pass interference.

This play in #PITvsNO was Defensive Holding that evolved into Pass Interference. In scenarios like this, the officials will enforce the Pass Interference penalty as the holding continued while the pass was in the air. pic.twitter.com/mFO5UlzlN6

Immediately after Tomlin said on Tuesday that he didn’t believe that Haden has committed defensive pass interference on that play in question, he was asked if he thinks such penalties should be made reviewable in the future.

“You know, I’ve got a firm position on that, man, I don’t,” said Tomlin. “I just worry about the entertainment component of it and what that might do for fans and the viewership. What that looks like. But given some of the things that have happened, I’m sure it will be up for debate, as it always is and has been in recent years. Because technology and the amount of coverage that our game at this level gets not only on Sundays but seven days a week, allows for that type of scrutiny and review.

“It’s just part of our business today and so I think we all understand that. I think we’re all ready to have that debate every year. I don’t think we’re ever moving away from that debate, the utilization of technology and information on different components of the game, whether it’s play, strategy, officiating or otherwise.”

Later, Tomlin was asked to explain how he goes about dealing with the frustration of missed calls.

“How do you deal with it when your kids don’t listen?” Tomlin asked. “You move on, you know, you got to focus on the things that are within your control and the things ahead that are within your control because you’re going to miss an opportunity when you don’t. And so, I choose to operate the way I want our team to operate. They’re going to be plays that happen in a game, positively and negatively, for a variety of reasons. Whether it’s performance-related or officiating-related or anything-related, the bottom line is when they’re done, they’re done, you got to move on. Because most of the time what truly defines you are the plays that lie ahead and you can miss an opportunity crying over spilled milk. That’s not our style, that’s not my style and it won’t be.”