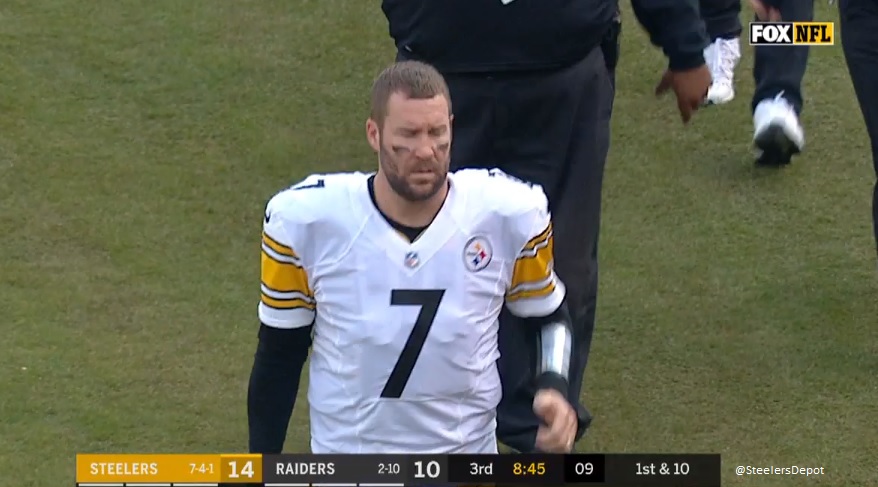 The Pittsburgh Steelers suffered a very disgusting road loss to the Oakland Raiders on Sunday and that defeat included quarterback Ben Roethlisberger leaving the game at halftime with a rib injury. While Roethlisberger ultimately returned to lead the Steelers offense to a go-ahead touchdown with just a little less than three minutes left in the game, he spent the previous few series on the sideline after finally returning from the locker room.

After the game was over, Steelers head coach Mike Tomlin was asked to disclose what the determining factor was to finally let Roethlisberger return to the game when he did.

“He probably could have come in a series or so sooner but we were in the rhythm and flow of the game. He was ready to go when he got back out there,” Tomlin said.

Tomlin was then asked if Roethlisberger had been medically cleared to return to the game at halftime.

On the surface, it appears as though Roethlisberger was ready to return to the game a few series before he actually did and that Tomlin was comfortable leaving backup quarterback Joshua Dobbs in the game with the Steelers leading. Once the Raiders took the lead with 5:20 left in the game, however, Tomlin knew he better put Roethlisberger back in.

It will be interesting now to hear Roethlisberger’s side of the story. If he was indeed ready and cleared to return a few series before he actually did, shame on Tomlin. Roethlisberger, by the way, came out of the Steelers locker room with 8:45 left in the 3rd quarter. At that time the Steelers offense had the ball and were facing a 1st and 10 from their own 49-yard-line. It was the Steelers second offensive possession of the second half.

As for the nature of Roethlisberger’s injury, Tomlin would only say that an update will be given at the start of next week.