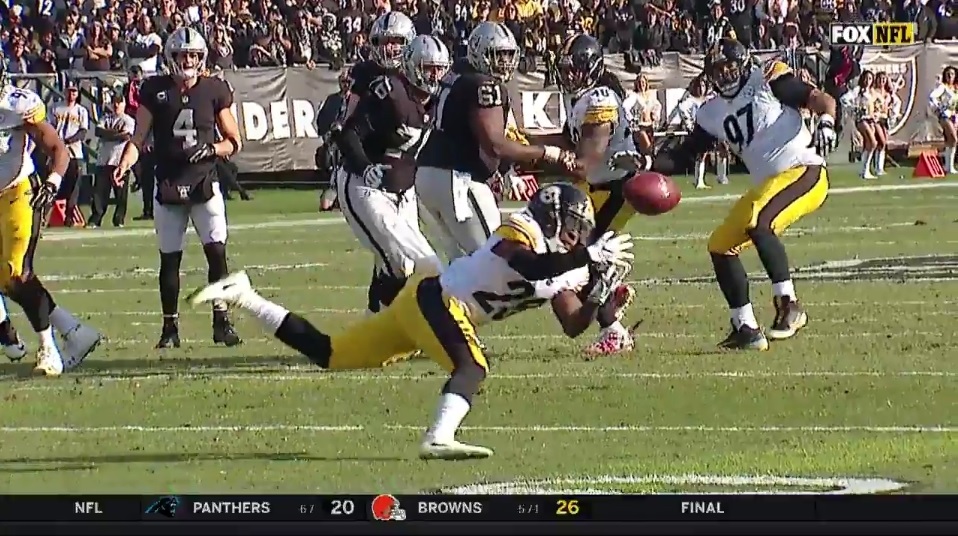 The Pittsburgh Steelers have a lowly six interceptions this season. Only four of those have come from a defensive back, the second fewest in the league, and they have just one pick – via Vince Williams – in their last six games.

As we wrote about Monday morning, this secondary simply lacks the ball skills to make those kinds of plays. They’re not able to make the spectacular interception that changes a game, stalling a drive, giving the offense an extra possession, creating space on the scoreboard. And too often in 2018, this unit is unable to make the easy plays too. The uncontested picks, the ones that should’ve been picked off.

By my count, the Steelers have dropped TEN interceptions this year. For the sake of argument, if we assume they picked every one of those passes off, they’d have 16 for the season, third for third most in the NFL.

Painful as this is, here are all the chances this unit has simply missed out on. Some are more egregious than others but all fall into the same category: missed opportunities.

The first came in overtime of Week One. Credit to Sean Davis for breaking this pass up, if he doesn’t, it’s a touchdown and the ballgame, but safeties with great ball skills can finish this play instead of just knocking it down. At the time, something to laugh off, and teammates did, but in hindsight, would’ve been one of the best plays by a Steelers’ DB this year.

Two weeks later against Tampa Bay. Joe Haden breaks up this throw for Mike Evans, it’s effective bracket coverage, but can’t finish the play. Picking off this throw could’ve almost ended the game right there. Instead, the Bucs keep their drive alive, though ultimately went three-and-out and forced to punt.

Not the easiest play for Artie Burns here trying to catch this one over his shoulder but a play he can definitely make uncontested. Can’t hang on, the ball slips through his hands as he takes his left hand off it to break his fall and the pass is incomplete.

This came at the end of a blowout win over the Atlanta Falcons so no harm, no foul, but another example of a Steelers’ DB not being able to finish the play. It’s the trend that’s disturbing here.

Pittsburgh dropped two against Cincinnati in Week 6. Haden had the easiest one in the world after undercutting this route intended for A.J. Green but let it slip through his hands. T.J. Watt then failed to finish a play a little while later. That pick would’ve set the Steelers up deep in Bengals’ territory.

Anthony Chickillo may have stolen this pick from Mike Hilton in Week Eight. Chick read Baker Mayfield’s eyes and jumped the throw, but let it slip through his hands and bounce to Hilton’s feet. That’s an interception with a long return waiting to happen. Instead, the Browns connect on a long field goal.

It looks like Davis intercepted this pass but it’s correctly ruled incomplete. Jacksonville punts but more times off the clock and the Steelers start at their 20 instead.

This one obviously isn’t Haden’s fault. It’s probably an INT if Davis doesn’t get in the way. But this is the height of the bad luck, Davis taking out his teammate, and Keenan Allen coming down with the bounce. At this point, the frustration really begins to mount.

Then there was Sunday. Two more drops. Mike Hilton not able to reel in this 3rd down throw after the Raiders’ wide receiver slipped. Another swing of points, letting Daniel Carson boot a 44 yard field goal to go up 10-7.

Then there’s Davis, diving out for this pass on 3rd down, letting it go through his hands. A more difficult play, sure, but one a starter needs to make.

Even if the Steelers make half those plays, we’re talking about a different defense. One that’s giving up fewer points, creating more splash, getting crucial stops, and giving their offense more opportunities. But they’re not and this losing skid won’t stop unless that changes.