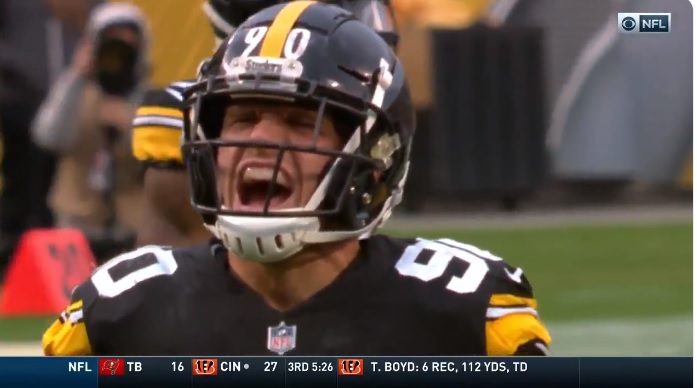 As we will do every Saturday to get you ready for the week’s game, our X Factor of the week. Sometimes it’s a player, unit, concept, or scheme. What will make or break the Pittsburgh Steelers for Sunday night’s matchup as they look to end their losing streak against the Oakland Raiders.

For what it’s worth, Pro Football Focus has him listed as the #75 ranked offensive tackle, well below average. So much so that those who cover the team are asking him to be replaced by Denzelle Good, who they just claimed off waivers.

It’s one of several reasons why Derek Carr has been sacked 38 times this year, the fifth most of any quarterback in the league. The Steelers are leading the league with 41 sacks and Watt is the leader with 10.5. He’ll be matched up on Parker throughout the game. That’s a winnable matchup. It’ll be a little tougher with the tight end on that side, especially blocker-first Lee Smith, who will give help, but Watt will have his chances. I’ll almost be disappointed if Watt can’t come away with another three sack game.

And if Watt and the Steelers win the line of scrimmage defensively, it’s game over for Oakland. Most teams want to establish the run but it’ll be imperative for the Raiders. They don’t want to sling it 40 times, given those sack totals for each side. So stop Doug Martin and Jalen Richard, force them to pass, and let Watt go to work on Parker.

Really, the whole pass rush should have a high degree of success. There’s winnable matchups all around. But Watt vs Parker is the one to circle.