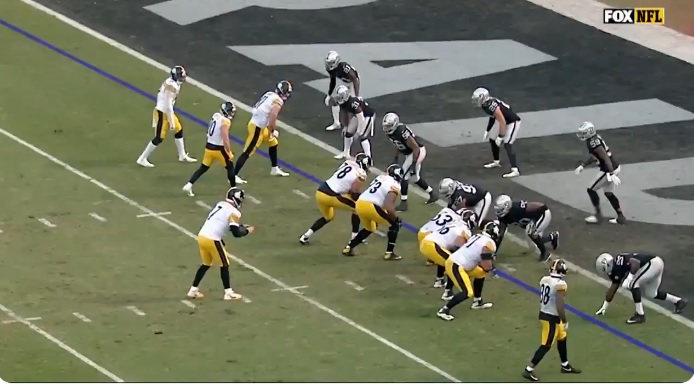 JuJu Smith-Schuster: Smith-Schuster was the bright spot offensively, repeatedly coming up with difficult catches along the sideline. He topped things off at the end of the first half, showing ridiculous concentration to make the grab and keep both feet in the back of the end zone for the score. He then wrestled away the ball for the (then) go-ahead score.

His game continues to evolve and he’s only going to get better.

T.J. Watt: Watt consistently brought it defensively. Holding calls hurt his chances of finishing plays for sacks but he routinely whooped on Raiders RT Brandon Parker, exposing the overmatched rookie. He might not be an elite pass rusher but he’s very good at pretty much everything the Steelers ask him to do.

Jaylen Samuels: While Samuels clearly isn’t ready to be a running back yet, he’s going to need to drop weight in the offseason, he looks natural and comfortable out of the backfield. Right now, he’s more receiver than he is runner. He repeatedly broke tackles in the open field, including a crucial pair of catches on the go-ahead drive.

Stephon Tuitt: Nice game for him. Whooped on Parker for a sack early in the game and had a big stick along the goal line, though the Raiders still came away with a touchdown on the drive. Knocked down another pass too.

Run Game: Despite the Raiders having one of the league’s worst run defenses, Pittsburgh got nothing going on the ground. Not having James Conner was an issue, obviously, but that’s not enough of an excuse. Again, the Steelers had to rely on the passing game.

Secondary Ball Skills: Just awful. Mike Hilton and Sean Davis dropped a pick. Joe Haden somehow couldn’t break up a slant to Jordy Nelson that led to Oakland taking the lead. It took Derek Carr somehow losing his grip on the ball to create a turnover, though Hilton made a heady play to slide on top of it.

Morgan Burnett: Special mention for Burnett. He couldn’t cover a thing Sunday. Jared Cook burned him on in and out breaking routes. But the worse play came at the end, entirely oblivious to where the football was on Seth Roberts’ huge catch down the middle of the field. Never came close to finding it. Burnett did make a big play late – getting away with some holding – but still, a terrible game overall.

Chris Boswell: I can’t fault him for missing the game-tying field goal. That field was a mess. But you can blame him for a missed field goal and XP he had to bank in. What a terrible year for Boz.

Coaching: You can put a blanket on this. Keith Butler’s gameplan was uninspiring, even if less egregious than last week’s mess, while Randy Fichtner had several questionable playcalls. The decision-making with Ben Roethlisberger was weird, not playing him until the Steelers trailed late in the fourth quarter. They seemed to hope Josh Dobbs could come in and take care of things. Based on how bad things were going outside of Roethlisberger, no run game, a defense not making plays, I don’t know why they assumed he could/would. That’s 100% on Mike Tomlin.

Tomlin’s worst mistake came at the end. Raiders, in goal-to-go, were bleeding the clock, knowing that wasn’t an issue anymore. Tomlin opted against using his timeouts, letting Oakland work the clock down to about 20 seconds left, and giving his offense no chance when the Steelers inevitably gave up the game-winning touchdown. Wholly unacceptable.