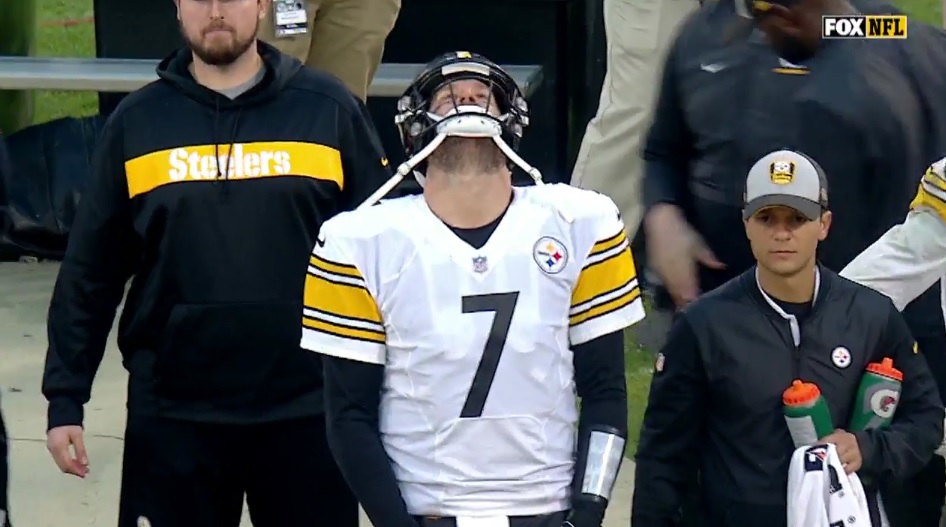 Fire the Pittsburgh Steelers into the sun.

Sunday’s 24-21 loss to the Oakland Raiders in Oakland has quite a bit to unpack, so bare with me.

Aside from atrocious coaching and personnel decisions, the execution on the defensive side of the ball in the fourth quarter was pathetic, as was the kicking of Chris Boswell, who could be out of a job on Monday afternoon.

The only real positive from Sunday’s game was the play of Ben Roethlisberger (when he was on the field; more on that later), JuJu Smith-Schuster and rookie Jaylen Samuels.

Let’s get this over with.

Whatever the lowest grade possible is on the positional grades scale, give it to the Steelers’ coaching staff.

Let’s start with Mike Tomlin. We’ve known for years that his clock management is God awful, but Sunday’s showing might have been his worst. Following the big completion from Derek Carr to Seth Roberts down the field put the Raiders in the red zone, Tomlin allowed Oakland to call a run with 1:21 left in the game and didn’t take a timeout immediately afterwards. That allowed the Raiders to milk the clock to 30 seconds left with the Steelers sitting around with two timeouts until he finally decided to take one with 25 seconds left.

What exactly was his plan there? It was likely the Steelers were going to get the ball at the 25-yard line after the ensuing kickoff because Oakland was undoubtedly going to score a touchdown, so you were banking on Roethlisberger driving the Steelers 50 yards for a field goal attempt or 75 yards for a touchdown with less than 25 seconds and two timeouts? Very unlikely.

Outside of Tomlin, Keith Butler continues to be a disaster. Early on, Butler had LJ Fort covering Jared Cook outside of the hash marks and Marcell Ateman up the seam. He needs to stop putting his defenders in position to fail like this. Aside from that, Butler was outcoached by Jon Gruden much of the day. Gruden had Butler guessing wrong quite often on Sunday.

Offensively, what was the decision with Roethlisberger not coming back into the game until the Steelers are down 17-14, and what is up with an end around to Darrius Heyward-Bey on the second play of the game?

The second call was on Randy Fichtner. He got too cute at times, which caused the Steelers’ offense to stall at times.

If Roethlisberger played the entire game this grade would be much higher. Roethlisberger finished 25-for-29 for 279 yards and two touchdowns to Smith-Schuster.

He was dealing throughout the game before failing to come back out after halftime due to a rib injury. That’s when things really took a turn for the worse for the Steelers as Dobbs came in and struggled throwing the football, finishing just 4-for-9 for 24 yards and an interception. He threw late a number of times and seemed to process things slowly, resulting in late throws that defenders were able to break on and disrupt.

As for Roethlisberger, a number his throws were checkdowns to Samuels and Vance McDonald, but when he pushed the ball down the field to Smith-Schuster and Antonio Brown he threw with touch and accuracy, helping the Steelers’ offense move the football.

As a runner, Samuels was pretty poor, missing a couple of lanes and rarely running with much burst. As a receiver, Samuels thrived, finishing with seven catches for 64 yards, mostly off of swings and screens.

Samuels averaged just 2.5 yards per carry on the day, which pretty much summed up the Steelers’ rushing attack. Pittsburgh never got much of a push on the ground, which forced the Steelers into a one-dimensional attack.

Steven Ridley scored a rushing touchdown in the loss, but he carried the ball five times for 4 yards in his first action in a month.

James Conner was sorely missed on Sunday with his ability to make defenders miss.

Smith-Schuster continues to emerge as a superstar receiver in this league.

While all seemed lost for the Steelers’ offense on Sunday, Smith-Schuster turned in an 8-catch, 130-yard, 2-touchdown performance for the Steelers, nearly single-handedly dragging Pittsburgh to an ugly win.

His 43-yard catch-and-run on a hook-and-ladder with James Washington was nearly the play of the game until Boswell slipped on his game-tying field goal attempt, giving the Raiders the win.

Brown finished with just five catches for 35 yards as he was relegated to a screen-pass receiver, finishing with a long of 13 yards on the afternoon. Oakland did a nice job of jamming him at the line and sending help his way, but at some point Fichtner has to help him out with some schematic adjustments.

James Washington finished with two catches for 11 yards in his return to the lineup. He was targeted a few times by Dobbs, but the second-year quarterback threw late to Washington, allowing defenders to break up the passes.

Ryan Switzer should have had a walk-in touchdown late in the first half on a slat-flat combo route on the left side of the offense near the goal line. Roethlisberger threw a bullet to Switzer’s back earhole, rather than out in front, causing Switzer to fall short of the goal line.

I would have liked to see Roethlisberger and the Steelers utilize McDonald and Jesse James a bit more in the middle of the field.

McDonald hauled in four passes for 37 yards, rumbling free in the middle of the field at times, while James finished with two catches for 28 yards, sitting down in the Oakland zone for Roethlisberger to hit him.

As run blockers neither made an impact, handcuffing the Steelers against a loaded box in the third quarter with Dobbs at quarterback.

Against the league’s 32nd-ranked run defense, the vaunted Steelers’ offensive line helped the Steelers rush for just 2.1 yards per carry with a long of just 10 yards, which was a quarterback scramble by Dobbs for a first down.

The offensive line never got a push up front against a depleted Raiders front seven. Now, this isn’t an excuse, but throughout the second half until Roethlisberger returned, the Raiders loaded the box with eight defenders against Dobbs and Samuels, daring the Steelers to throw. Instead, they tried to run the ball down the Raiders’ throats to no avail. It’s tough to run against an eight-man box, so it I understand some of the struggles, but the offensive line disappeared throughout the game.

Matt Feiler finally came back to earth against the Raiders, while Maurkice Pouncey and Ramon Foster had issues passing off stunts along the interior, one of which led to the sack that injured Roethlisberger.

Javon Hargrave, Stephon Tuitt, and Cam Heyward dominated up front against the Raiders’ run game, holding Oakland to just 2.8 yards per carry. The trio consistently worked off of blocks to make plays on the ball carrier, oftentimes behind the line of scrimmage.

As a trio, they combined for 12 tackles, two tackles for loss and one sack in the loss.  They were routinely around the football and put pressure on Carr; the struggles behind them in the secondary aren’t on them.

I get that Fort is the most athletic inside linebacker on the 53-man roster, but at some point Butler needs to realize Fort isn’t a coverage linebacker. Right away, the Raiders went at him with Cook, and later Ateman, resulting in splash plays for the Raiders’ offense.

Vince Williams was okay against the run, but his worst play of the game came on Lee Smith’s touchdown to give the Raiders a 17-14 lead. Williams got caught with his eyes in the backfield, allowing Smith to slip behind him across the field for the score.

Jon Bostic also wasn’t heard from much again after he let Cook cross his face over the middle, leading to a 19-yard gain.

Outside, TJ Watt and Bud Dupree played so well against the Raiders’ tackle tandem of Kolton Miller and Brandon Parker.  Dupree was nearly unblockable at times against Miller, recording a sack and drawing a couple of holding calls, while Watt played well against the run, setting the edge with force. As a pass rusher, he gave Parker fits and was held a number of times without a call.

This group has zero ball skills or awareness. It’s so incredibly embarrassing and insulting to the fan base.

The Steelers should have picked off Carr at least twice as Mike Hilton and Sean Davis has throws go right off of their hands for incompletions.

Then, Terrell Edmunds and Morgan Burnett sure don’t know how to play the football, and Joe Haden is rarely tested that he doesn’t know how to react quickly enough to break up a pass.

The secondary has been a problem for years and its not going to get any better.

Burnett should be one-and-done in Pittsburgh. He was brought in to cover tight ends and he was torched throughout the day before Roberts burned him and Edmunds down the field, setting up Oakland’s go-ahead touchdown.

Hilton was smoked by No. 3 tight end Derek Carrier on a pivot route, so that right there showed the Steelers deserved to lose. Maybe the only defensive back that wasn’t terrible on Sunday was Coty Sensabaugh, which is saying a lot.

Hilton was good as a blitzer, but he needs to make some plays on the football and not get torn up by a third-string tight end for a touchdown in that situation.

It seems like it’s time to move on from Boswell. He’s now missed six field goals and five extra points on the season. That’s bad enough to get a kicker cut, so why isn’t it any different for Boswell? He’s a major liability, and if the Steelers are to make the playoffs, do you want him in a clutch situation kicking a field goal right now? The answer is no.

Yes, he slipped on a poor field on his game-tying try, but his missed field goal earlier in the game wasn’t even in the same zip code as the middle of the uprights, and he has the yipps on extra points.

Punter Jordan Berry had a really good first punt, but after that followed it up with punts of 36 and 35 yards. That’s not going to get it done.

Switzer was fine as a returner, averaging nearly 10 yards per punt return on the afternoon, but he never really flipped the field for the Steelers.