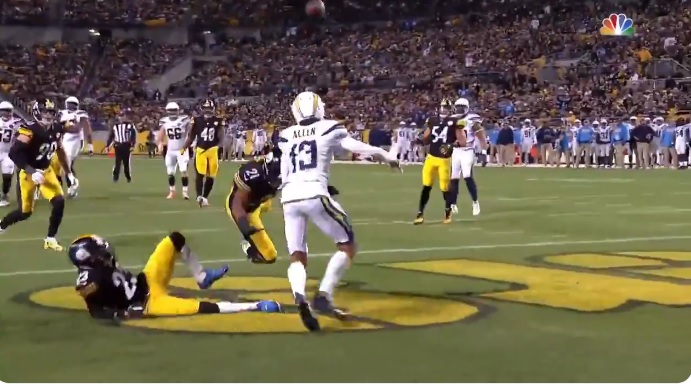 Well. That sure sucked. Winners and losers from the Pittsburgh Steelers’ 33-30 loss to the Los Angeles Chargers.

Antonio Brown: Brown finally broke out tonight, burning Casey Heyward early in the game for a 46 yard completion. He then caught his first TD pass late in the half, a scramble drill that saw AB run across the entire field for the score.

L.J. Fort: Fort played almost every snap tonight. And with good reason. He is the best athlete they have at ILB, capable of covering the Chargers’ backs in coverage and in space. Led the team in tackles, not to mention a blocked punt, coming in free but finishing the play. He might just be the guy going forward. And I sure won’t complain about that.

Alejandro Villanueva: Credit to the entire line for the job they did in pass protection. But Villanueva schooled Joey Bosa for most of the night. No better example than AB’s score, sending Bosa tumbling to the ground and giving Ben Roethlisberger plenty of time to complete the play. Villy has been terrific this season. Big pops to David DeCastro too, who had another great game.

Defensive Line: Across the board, this unit excelled. Javon Hargrave recorded his 6.5 sack of the year while the group got constant pressure. Like to see them getting their hands up in throwing lanes too, batting down two of them tonight. They’ve knocked down five over the last three weeks after doing so just once the first nine. Hidden factor but an impressive turnaround you bet was addressed by DL coach Karl Dunbar.

Jordan Berry: Good game for him, showing distance and the ability to directionally punt. 65 yarder and another that pinned the Chargers at their 12. He’s really turned his season around. Too bad the rest of the team is shifting into reverse.

Refs: Can’t excuse it as the only reason why the Steelers lost tonight, far from it, but they were brutal. The missed false start on the Chargers’ first touchdown. The missed block in the back on Brian Allen off the punt return score. And a half dozen other calls you could characterize as…questionable, if you’re being kind. They were bad and the NFL has to figure it out.

Sean Davis: In the first five games of the Steelers’ win streak, it felt like Davis had turned the corner. He showed the ability to tackle in space and generally keep a lid on things. Since then, he’s been bad. Poor angles, missed tackles, and ramming into Joe Haden that led to a Keenan Allen touchdown, one of those plays you laugh at if only to keep from crying. No splash from him and lately, he’s been doing active harm to this defense.

This secondary has no ball skills. And it showed again.

Chris Boswell: That extra point he missed sure ended up coming back to bite the Steelers, letting the Chargers tie the game at 23 before taking the lead later in the fourth quarter. Still hasn’t figured things out.

Special Teams Penalties: Count ’em, five of them that backed the Steelers up too many times. Believe they’re now leading the league with 24 of them this year. They had 20 all of 2017. Offsides twice on the final two field goals, the former that negated a miss that would’ve sent the game to overtime.

Another issue that hasn’t gone away.

Mike Tomlin: For that awful second half challenge that cost the Steelers a timeout – they had no chance of reversing it – and left them with only two for the Chargers’ final drive. Just a dumb decision that goes against his philosophy of only throwing the red flag on spot fouls with a clear landmark. This wasn’t one of those times.

Keith Butler: For having no answer how to stop Keenan Allen. Had a LB on him all game, from the first drive to the last. Pitting Jon Bostic on him on the final 3rd and 5 is a fireable offense in itself. Unreal.