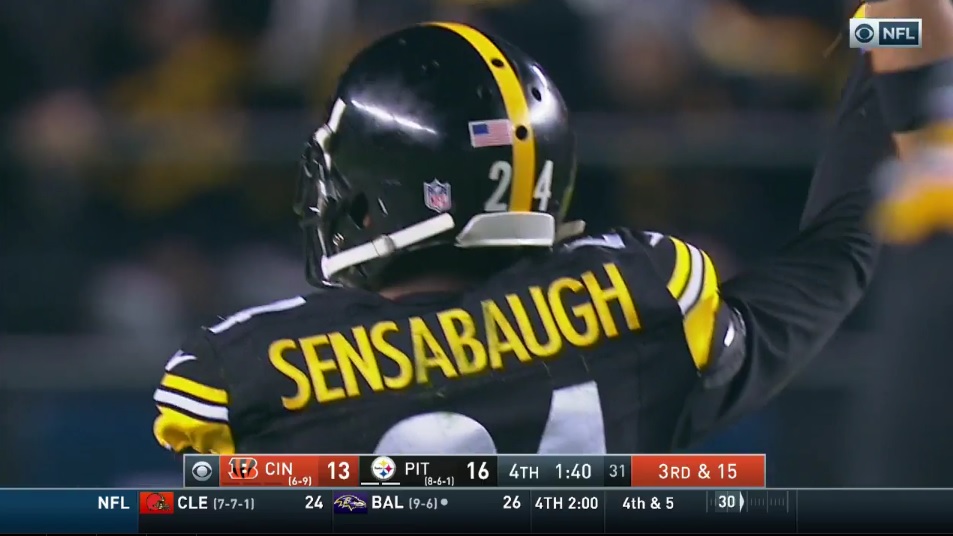 Just when it looked like the Cleveland Browns were going to pull off the upset of the Baltimore Ravens to send the Pittsburgh Steelers into the playoffs, it all came crashing down, sending the Steelers and their fans home distraught just a few short minutes after riding high following a 16-13 win over the Cincinnati Bengals to close the season at home.

Against the Bengals, Pittsburgh looked sloppy throughout the contest as Ben Roethlisberger threw a pick-6 on what he thought was a free play, and the offensive line rarely gave him a clean pocket to work from.

Fortunately, the defense showed up in a big way as Cam Heyward, TJ Watt, Stephon Tuitt, and Anthony Chickillo all recorded sacks in the win, while the secondary held Jeff Driskel and Co. to just 95 passing yards in the 3-point win in which rookie kicker Matt McCrane played a big role, drilling 3 field goals.

Alas, it was all for naught as the Ravens won and secured the AFC North title.

Pittsburgh was once 7-2-1 and finished 9-6-1. Changes should be coming for the black and gold.

For the final time this season, let’s take a look at positional grades for the game.

Aside from Roethlisberger’s dreadful pick-6 to Shawn Williams that had the Bengals out in front early, Roethlisberger was neither good, nor bad throughout Sunday’s game at home.

His 41-yard completion to James Washington pushed him over 5,000 passing yards on the season, but too often on Sunday Roethlisberger was afraid to push the ball down the field, relying on crossing routes and screens designed to get the ball to guys in space to try and make defenders miss. It goes back to Roethlisberger needing to have guys be college open for him to pull the trigger. That led to at least one coverage sack today, and a number of other pressures.

That being said, he was still spectacular in his ability to make guys miss in the backfield and extend the play. But if there’s one thing I want from Roethlisberger this off-season, it’s to rediscover his 2014 mentality where he was efficient with the ball and didn’t force things.

In his first game back from an ankle injury, James Conner looked pretty good when called upon, going for 97 total yards on just 17 touches, rushing for 4.6 yards per carry in the win. Conner made a number of guys miss on Sunday and had that burst back to his game that the Steelers have been missing on the ground in recent weeks, no shade to Jaylen Samuels thrown.

Speaking of Samuels, it’s clear what his role will be next season. He’ll be the traditional third down back where he’ll receive a heavy workload in the passing game. Against the Bengals, Samuels caught seven of his eight targets for 40 yards, helping the Steelers control the ball and move the chains.

Moving forward, I really like the potential combination of Conner and Samuels in the backfield.

If you didn’t believe it before, Sunday’s game showed you just how valuable Antonio Brown is to this offense, just from an aesthetic standpoint.

Without the top wideout in the game available on Sunday due to a knee injury, the Bengals were able to bracket JuJu Smith-Schuster, forcing guys like Washington, Eli Rogers, and Ryan Switzer to step up at receiver.

Rogers did haul in seven passes for 57 yards, but he did a lot of his damage on short passes over the middle, rarely creating a ton of separation on his routes. That was a big problem for the rest of the receiving corps on Sunday as they simply couldn’t work open against man coverage. Washington did have the 41-yard catch that saw him get wide open on a double move, and he had a great catch through contact in traffic over the middle, but the Steelers weren’t really able to scheme him open on a consistent basis against the Bengals.

As for Switzer, his role on offense greatly diminished as the season progressed, and Rogers got up to speed. The scat receiver finished with just one catch for 2 yards, and fell down – again – on a third-down route along the left sideline that forced the Steelers to settle for a field goal.

Smith-Schuster was definitely frustrated with his lack of production on Sunday and had a big early drop, but he bounced back to finish with five catches for 37 yard and a touchdown in the third quarter that tied the game up at 10-10.

Coming into the game, there was the expectation that Vance McDonald would have a heavy workload with Brown out, and the Vanimal holding a clear advantage in his matchups with Cincinnati linebackers. However, he was targeted just six times, hauling in three receptions for 39 yards, one of which came on a tight end tunnel screen.

If anything, the Steelers didn’t utilize him enough on Sunday.

As for Xavier Grimble and Jesse James, the Steelers again hit Grimble on a play-action fake that saw him run right across the formation like he did in Denver. This time though Grimble held onto the football, picking up 16 yards on his lone receptions.

James was a fine run blocker on Sunday, but he had a monumental drop in the fourth quarter after Roethlisberger shrugged off Sam Hubbard in the pocket and put the ball right through James’s hands on the run.

Take away Roethlisberger’s kneel downs late, and that ridiculously stupid reverse to Rogers that lost 4 yards, the Steelers rushed for 71 yards on 17 carries. That’s 4.17 yards per carry, with Conner leading the way at 4.6. Add those runs back in and that YPC number drops to 3.3.

On paper, that looks dreadful for the best offensive line in the game, but I thought they were pretty solid running the ball when called upon.

The area that drops this game to a D+ is the pass protection. Yes, I said earlier Roethlisberger held onto the football way too long at times, but this unit was confused early and often on blitzes by Cincinnati, and lost one-on-one matchups up front a handful times, not to mention a couple of penalties, mainly by Maurkice Pouncey.

Alejandro Villanueva had a tough game at left tackle, getting beat a couple of times by Carlos Dunlap and Sam Hubbard, while Pouncey really struggled at times against Geno Atkins.

I hope everyone enjoyed watching Ramon Foster on Sunday as much as I did in what was likely his last game as a Steeler. He played with a real chip on his shoulder and was throwing guys out of the club left and right. He’ll be sorely missed next season if the Steelers let him walk.

The Bengals did rush for 125 yards on Sunday, highlighted by Joe Mixon’s 51-yard run in the fourth quarter, but I thought the group up front was superb on Sunday, especially Heyward.

Heyward finished with 2 sacks in the win, while Tuitt added half a sack and 2 quarterback hits as well. The guys in the trenches really ate up Cincinnati’s offensive line on Sunday.

Javon Hargrave had an offside penalty in the game, but he was a strong run defender up front, finish with 4 runs stops on the afternoon. When the defense needed them the most, the three up front came up big.

TJ Watt is something special, folks.

The second-year linebacker was nearly unblockable on Sunday, giving Bobby Hart fits throughout the game. Watt forced his league-leading sixth forced fumble on a strip sack of Jeff Driskel, and added 7 tackles on the day. Now, the Steelers need to find another guy opposite him to compliment his talents because Bud Dupree isn’t it.

He really struggled against the run, gave very little effort as a pass rusher at times, jumped offside again for his fifth offside penalty of the season, and seemed to be more interested in jawing at Mixon all game, rather than playing Steelers football.

Anthony Chickillo recorded half a sack with Tuitt in the first half and seemed to get quite a bit of run as the game progressed. He was just fine; nothing more, nothing less. That’s what he is.

Inside, LJ Fort had a strong game, leading the Steelers with 8 tackles. Fort was the primary inside linebacker on the field throughout the game as the Steelers rolled with a 3-3-5 formation, pushing Jon Bostic to the bench.

This group held Jeff Driskel to 95 passing yards in the win. Now, that might not be something to write home about, considering the group of receivers and QB they had to go up against, but it was a nice close to the season for a much-maligned group.

Morgan Burnett had a nice pass breakup down the field for the second straight week, while Coty Sensabaugh came up big on the final drive, breaking up 2 passes to help clinch the win.

Joe Haden was rarely tested on Sunday, which was smart of the Bengals. Mike Hilton and Cam Sutton split time in the slot in another head-scratching decision. Sutton looked lost at times covering Alex Erickson, but Sutton did record 2 quarterback hits in the win as a blitzer off of the edge.

Terrell Edmunds had a sloppy game to close an up-and-down rookie season. He had a dreadful missed tackle on Mixon’s 51-yard run, and failed to make a play on the ball a couple of times down the stretch.

Well, McCrane sure did work out well for the Steelers. The rookie signed off the street earlier in the week went a perfect 3-for-3 on field goals in the win, becoming the first Steelers rookie kicker since Jeff Reed in 2002 to do that. McCrane scored 10 of the 16 points in Pittsburgh’s win.

Punter Jordan Berry was very meh. He punted five times for 189 yards, averaging 37.8 yards per punt. A couple of times he punted from near midfield or in Bengals territory and failed to really pin them back deep. It’s beyond annoying. Yes, he dropped 4 of his 5 punts inside the 20-yard line, but none of them were inside the 10. A very good punter takes advantage and pins them deep like that. Berry rarely does.

Switzer really struggled on punt and kick returns once again. He made a few guys miss on punt returns, but he looks like he’s stuck in mud at times and doesn’t get up the field like he once did in Dallas.

Penalties again continue to kill this group. Darrius Heyward-Bey was called for penalties twice, leading to free yards for the Bengals. I’m all for not bringing him back next season.