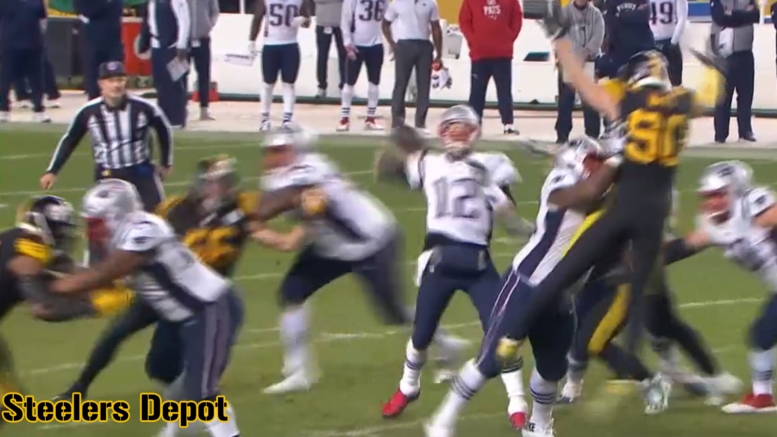 The Pittsburgh Steelers knew exactly what was necessary for them before the ball was even snapped today. They pretty much had to win. Coming in at 7-5-1, the Baltimore Ravens beat the Tampa Bay Buccaneers to go 8-6, giving them a temporary lead in the AFC North.

What’s more, two Wildcard teams, the Tennessee Titans and the Indianapolis Colts, both won their games as well to got to 8-6 on the season. Had Pittsburgh been unable to slay their dragon, the New England Patriots, they wouldn’t have simply lost the lead in their division; they would have slid to the eighth seed in the AFC playoff picture. And only six seeds make it.

And what did they do? The offense went out and scored just 17 points. You can’t score 17 points and defeat Tom Brady and the Patriots. Except when your defense stands tall in critical moments and New England continues to trip over their own feet with penalties.

While the offense was short on points, they did play very well for most of the day, shy of two interceptions, with Jaylen Samuels running the ball very well. JuJu Smith-Schuster very nearly had a touchdown late that would have given them a two-possession lead, and Chris Boswell did miss a field goal as well.

All of the woes can be pushed aside for another week, though, because the Steelers won the game that they had to have. The Ravens have to play the Los Angeles Chargers next week, so Pittsburgh is more likely to get some help there, while they visit the New Orleans Saints. Of course, if Baltimore ends up winning, then none of these games are expendable.

Posting a 17-10 victory over a fully healthy Patriots team while losing the turnover margin and even giving up a big-play touchdown on a blown coverage certainly sounded improbable coming off of a three-game losing streak in which the Steelers held a lead in the second half. They also at least were tied in the fourth quarter in each of those games.

What does this mean going forward? Practically speaking, it means that they continue to control their own destiny with two games to play. It means that they have slammed the breaks on a baffling losing streak that was preceded by six wins in a row.

But what does it say about who this Steelers team is? Many were convinced that this was not a team that could win in the postseason during their three-game losing streak. Does this win over the Patriots, which included stopping Brady with 150 seconds to go, change anything? Is this team, this defense, any different than the one we saw last week in Oakland?

Again, that’s a question for next week. For now, all we know is that the Steelers did on this day exactly what they needed to do.