It was a familiar story for the Pittsburgh Steelers on Sunday night as once again the team failed to record any takeaways and as a result, fell at the hands of the Los Angeles Chargers. The Steelers have only won the turnover battle three times this season and Sunday’s loss may have been the pinnacle of frustration with the team’s inability to force a turnover.

What makes the Steelers’ inability to force turnovers very puzzling is that they are not struggling to create prime opportunities for turnovers. The team leads the NFL with 41 sacks this season and has recorded ten sacks over the last three games but has only taken away the football once during this span.

Pressure equals turnovers, it is a cause and effect relationship that is rooted deep in football’s core. It is simple to explain as well; creating havoc in the pocket and ruining the quarterback’s mental clock leads to more errant passes and mistakes. Well, the Steelers have gone against the grain this season and destroyed that notion. 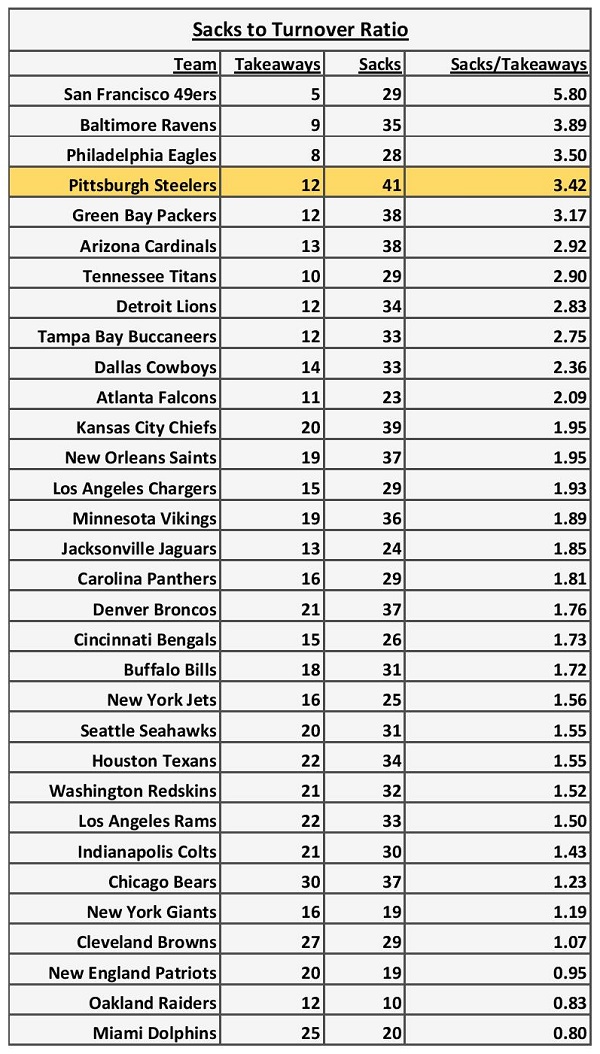 It seems that the Steelers are doing everything right, they are forcing pressure, getting into the quarterback’s face but the results are just not showing. Obviously, there is a lot more at play than just pressure when it comes to turnovers as scheme, coverages and personnel also play a huge part. Without access to Keith Butler’s defensive meetings, it is impossible to know the exact coverage and responsibility on every single play but what can be studied is the defense’s personnel and their ability to create splash plays.

Just what is a splash play? Generally, it is regarded as any play that has the ability to shift momentum – a fumble, interception etc. For the sake of this study, I’ll use forced fumbles and interceptions as splash plays, as these are plays that can directly put the ball back in the hands of the Steelers’ offense immediately and switch momentum.

One of the biggest criticisms of the Steelers’ defense is that they lack a true, game changing playmaker. The defense seems bland and vanilla, if you are a fan of playing it safe then the Steelers’ defense is just for you. The problem is playing it safe does not equal success in the NFL, the winners are always the one willing to take a risk to get a competitive edge, it is what made the defense so formidable when Troy Polamalu and Ryan Shazier were making splash plays from sideline to sideline.

The statement “The Steelers’ defense has not been the same since Shazier’s injury” is a common one and when it comes to creating splash plays, it is a true one. The Steelers just do not have many players capable of making splash plays on defense. 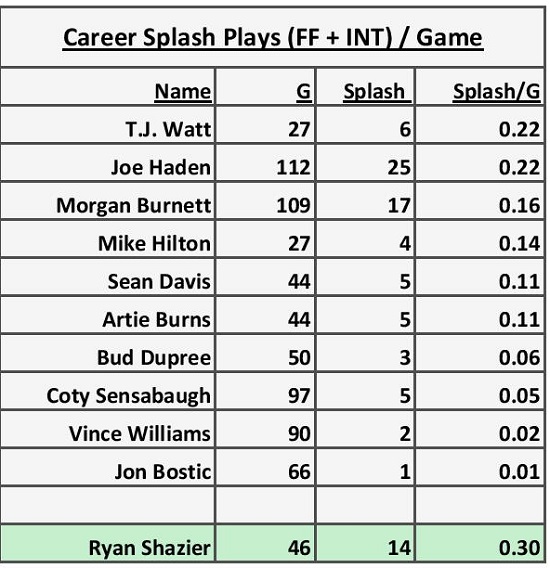 Watt and Joe Haden are the team’s current playmakers, averaging 0.22 splash plays per game each. Haden’s numbers are aided by his Cleveland days, as he has recorded just two splash plays in 22 career games as a Steeler. Where the numbers get really damaging are up the middle at inside linebacker and safety. If the team is trying to replace Shazier with a collective effort, they are doing a terrible job thus far. His replacements Vince Williams and Jon Bostic have a combined 0.03 splash plays per game, that is 10% of what Shazier offered on a game by game basis. Including Sean Davis and Morgan Burnett with Williams and Bostic, gives you an equal value of Shazier at 0.30 splash plays per game except with one problem. Burnett has failed to make any sort of impact this season and has been surpassed by rookie Terrell Edmunds, who has intercepted just one pass this season.

Adding the totals of all the starters in the secondary and linebacking core (that is everyone listed except Artie Burns), you get 0.99 splash plays per game, which makes sense considering that the Steelers have played 12 games and have 12 takeaways. The problem is that this is not enough to win, especially when Shazier could match one-third of that effort himself.

The Steelers will not be able to continue their hunt for their next defensive playmaker until next offseason but the team better hope that someone can step up and overplay their career norm down the stretch.