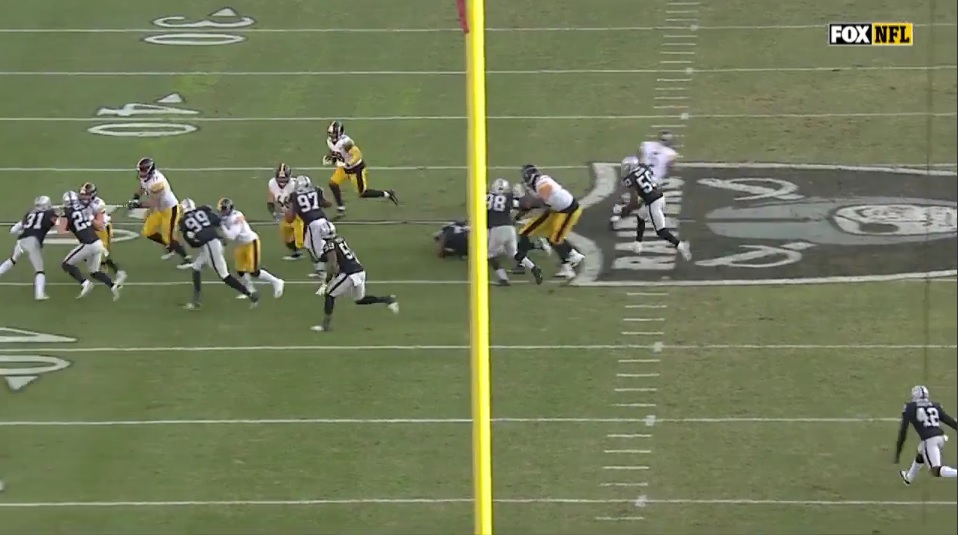 Earlier today, we broke down the many issues with the Pittsburgh Steelers run game in Sunday’s loss to the Oakland Raiders. But it’s always more important to hear it from the people inside that locker room. Sitting down with Bob Labriola in this week’s Coordinator’s Corner, Randy Fichtner was asked why the run game suffered so much.

“A little bit of it looked like we were a little sloppy footwork in general,” Fichtner said. “It’s a slick field. We talked about it all week. I told every skill player to take every shoe they have in their locker…there were times where we just felt a little bit, not firm in footing. Firm in cuts. Making decisions and that type of thing.”

By game’s end, the Steelers ran the ball 19 times for 40 yards. Jaylen Samuels “led” the team with 28 yards while Stevan Ridley had no daylight, averaging less than a yard per carry. It marked the fourth straight game Pittsburgh has rushed for 75 yards or fewer, the first time that’s happened in 63 seasons.

Fichtner agreed that sloppiness led to the team being less physical and aggressive by the line and the backs.

“I think after we watched the tape we agreed that collectively we have to be more aggressive in running. We gotta aggressively try and move people, try to get downhill, and be committed to a first cut and pounding the ball.”

He implied Samuels was pressing a little too much, looking for the big play each time instead of taking what was available.

“Every run, especially for a young guy isn’t always a home run. When you don’t get a lot of runs, you haven’t had a lot of runs, in Jaylen’s case, sometimes you look for that home run because you want to make that splash play. You see that in you see that in wide receivers, you see that in quarterbacks, and that’s when bad things happen. You miss a cut, you miss a whole, you try to make a play, and it ends up costing you four yards and you get one.”

As Ben Roethlisberger pointed out yesterday, the Steelers did have an effective screen and short-pass game with Samuels, who caught seven balls for 64 yards on the day. To Fichtner, that’s just as much part of the run game, even if it goes down as a pass in the box score.

Still, there’s no doubt that when the Steelers do run the ball, they need to be more effective than they have. That’ll be the case even if they’re again without James Conner this weekend. Conner failed to practice yesterday recovering from his self-described high ankle sprain.