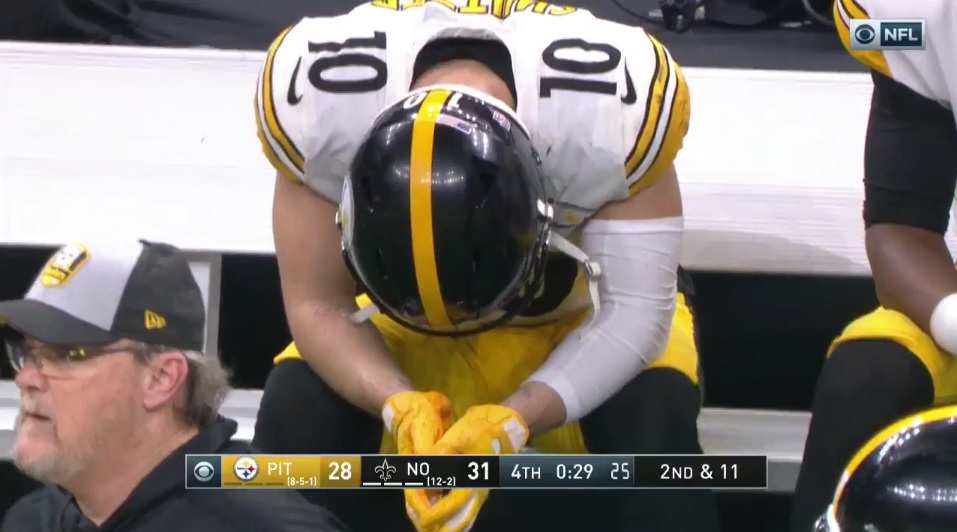 I can’t take much more. A Pittsburgh Steelers victory over the New Orleans Saints became even more important after Saturday night. That night, the Baltimore Ravens defeated the Los Angeles Chargers 22-20. This meant that a loss would move the men of steel out of first place in the AFC North and jeopardize their chances to qualify for the real tournament.

The Steelers Depot gives us specific things we should look for during the game. I always read these three articles prior to kickoff you can reread them to see how close to the mark they were:

Matthew Marczi described what we should watch for in the game.  Will groin injury slow JuJu Smith-Schuster down? Will Randy Fichtner employ the 5-wide receiver package? The all-around play of Jaylen Samuels. Will Steelers pass rush be effective. Can Bud Dupree and T.J. Watt contain Saints running game on the edges?

Alex Kozora predicted the factors that would lead the Steelers to win or lose the game. In sum, the Steelers would win if they limited Alvin Kamara & Michael Thomas production , attack Saints Cover 2, and Jaylen Samuels picks up blitzes. Alternatively, they lose if tight ends struggle run blocking, Taysom Hill produces in Wildcat, Saints score touchdowns in Red Zone.

The Steelers had five opportunities for the offense to score points. They chose to receive the kick for the second week in a row deviating from their previous practice of deferring to the second half when winning the coin toss. Ben was getting rid of the ball quickly as the Saints defense demonstrated tremendous speed. He also targeted Eli Apple on his first two passes, one a 15-yard completion to JuJu. The Saints swarming defense threw AB for a loss on a 3rd and 1 play in their second drive but Chris Boswell drilled a 49-yard field goal kick home. The offense responded to the NFL’s touchdown with another field goal after Ben failed to connect with JuJu on a 3rd and 9 play from the 12-yard line.

The offense got on track in the fifth drive going 97 yards with Jaylen Samuels catching a short pass for 6 followed by Eli Rogers tacking on the two-point conversion to tie the game 14-14. The Steelers scored points on 3 of 5 possessions (not counting the kneel down to end the half). Not bad work but needed to trade one of those field goals for a touchdown.

The second half started out excellent for the Steelers with their first two drives resulting in touchdowns. Antonio Brown and JuJu combined for seven receptions on the 1st drive. AB capped it with a nice TD catch. The next drive was quick. 66 yards covered in four plays in just 1:36 of play. AB scores another TD to add to his resume.

The Steelers offense had the ball three times in the 4th quarter. A touchdown in any one of these would likely win the game.

First, the Steelers inexplicably give the ball to Stevan Ridley on 3rd & 2 up the middle with the Saints stacking the box. Why did Randy Fichtner call such a play? Why didn’t Ben check out of the play? We’ll probably never know. End result is Ridley losing the ball and the Steelers losing an opportunity to go up by seven points or more if they had converted. Bah, Humbug.

Second, the Steelers are still leading 28-24 and get the ball at their own 37-yard line. Ben is sacked but AB gets the yards back on a 9-yard reception to make it 4th and 5 with 4:11 to go. The Steelers opt for punt formation but then go for a fake to Rosie Nix going up the middle. So close, but ends up a yard shy. He makes it and Mike Tomlin is a hero for such a gutsy call. He doesn’t and now he is on the hot seat. Bah, humbug.

Third, now the Steelers are down 28-31. Ben throws three straight incompletions. On 4th and 15, Ben connects with AB to convert. The next play, JuJu takes the Steelers into Saints territory with a 14-yard grab. Steelers are 1st & 10 from the Saints 42-yard line with 41 seconds to play. No timeouts left but plenty of time to either attempt to tie it with a field goal or win the game outright with a touchdown. Ben throws to JuJu for seven yards but he loses the ball before he can get to the ground. Game over. Bah, humbug.

The Saints used their Jack-of-all-trades Taysom Hill on their first drive. Sean Davis intercepted his only pass of the game in the end zone. The Saints quickly put their Jack back in the box as he did not record an offensive statistic for the rest of the game.

On the next drive Drew Brees connected with Michael Thomas for 28-yards who would prove to be a thorn in the defense the entire game. This was the play that Joe Haden was called for defensive pass interference on 4th down when measuring his distance from Kamara – a tactic allowed by referees as long as there is no push. Not this time. Bah, humbug.

The key play in the Saints third drive was another defensive pass interference call. It was called on Morgan Burnett and brought the Saints from the 38 to the 16-yard line. The defense unable to hold them to a field goal as Kamara runs in from the 8-yard line on a 3rd down play. Were they expecting play action? Bah, humbug.

The final blow of this half was with just 15 seconds to go in the half. Alvin Kamara gets a 31-yard reception toe tapping down the sidelines to set up a 43yard field goal. Bah, humbug.

The defense held the Saints to 14 points on 5 drives in the second half but it was just not enough. Another short pass to Kamara goes for 42 yards this time. Michael Thomas converts a 3rd down. Then on 3rd and 1 from the 1, Kamara scores. Bah, humbug.

The defense did force two punts and a long field goal attempt that was blocked which should have set the offense up for victory but it was not to be.

The defense had a final stand starting at their own 46-yard lines nursing a 4-point lead. On 4th and 2 and the game on the line, Joe Haden was called for defensive pass interference. He was holding but there was question whether the ball was tipped at the line of scrimmage. Regardless, it was upheld. The final blow came on 3rd and 20 when Ted Ginn, who was just activated this past week, beat Sean Davis for a 25-yard catch to set up 1st and goal from the 7-yard line. Michael Thomas caught two straight balls the second a TD. This placed the game in the hands of the offense with 1:25 left to play. Bah, humbug.

Special teams blocked a field goal that should have iced the game. L.J. Fort not only blocked the kick, he recovered the ball. This effort was spoiled by Mike Tomlin choosing to attempt a fake punt instead of pinning the ball inside the 20 and relying on the defense from there instead of their own 46. It was high risk; high reward move that turned out to be punishing. Bah, humbug.

Lost in the loss, is that Chris Boswell had a perfect game converting both PAT and both his field goal attempts. The Steelers did have another holding penalty on a kick return. This one against Nix but did not impact the game. Jordan Berry had two poor punts. His 57-yarder outran the gunners resulting in a touchback. His second punt was only 41-yards and was fair caught at the Saints 35-yard line. Would have been nice to force the Saints offense to start deeper in their half of the field both times. Bah, humbug.

The credibility of the NFL is low. Not helped by ignoring the state of horrendous officiating with little accountability or transparency.

There were 1242 1st half comments in this critical game with the theme focused on the refereeing. SkoolHouseRoxx got lots of agreement on his comment that, “Saints should have no pts.” At that point of the game. Shannon Stephenson & Alevin16 echoed the sentiment, “Steelers 6, Saints 0, Refs 14 and driving.” Paepercup add, “WOW…Hosed! Calls like that makes me not care if they make the playoffs, cause this league is rigged and rubbish.” I explained further, “So on a 4th and 1 refs call a phantom interference call. Then on a clear fumble they call an incompletion. Leads to 14 Saints points.” Shannon Stephenson put the half into perspective, “To be down only three is a miracle honestly…there is hope”

Steelers Depot respondents met the standard in the 2nd half with 1641 comments. Feelings about the poor officiating still rubbing nerves raw. Ryan 72384 lamented, “Take away those pass interference calls and wow we might be laying an ass whipping to these guys.” John Noh noted on AB’s almost one-handed end zone catch, “AB would normally drag that foot. Too much going on with that play. What an attempt.” The Grumpyhighlander laid a marker down, “D has to step up. O is doing their part” Prior to the fumble your truly put it on the line, “This offensive drive is the game right here, right now.” It was not to be. Bah, humbug.

The Steelers played well enough to win despite some atrocious officiating. However, the Steelers offense blew three opportunities to win it by fumbling the ball away twice and failing to convert on a fake punt 4th and 5. The defense blew it by failing to stop the Saints on a 3rd and 20 on their final scoring drive. Now, it comes down to beat the Cincinnati Bengals and the Cleveland Browns winning at Baltimore. Bah, humbug.

In the 2018 Memorial Day Weekend: Steelers Friday Night Five Questions, I committed to play songs that Steelers Depot respondents suggested might be the new Steelers anthem if Renegade by Styx was ever replaced. Here is entry 37 of 45 from DarthBlount47: Bodies Hit the Floor by Drowning Pool.