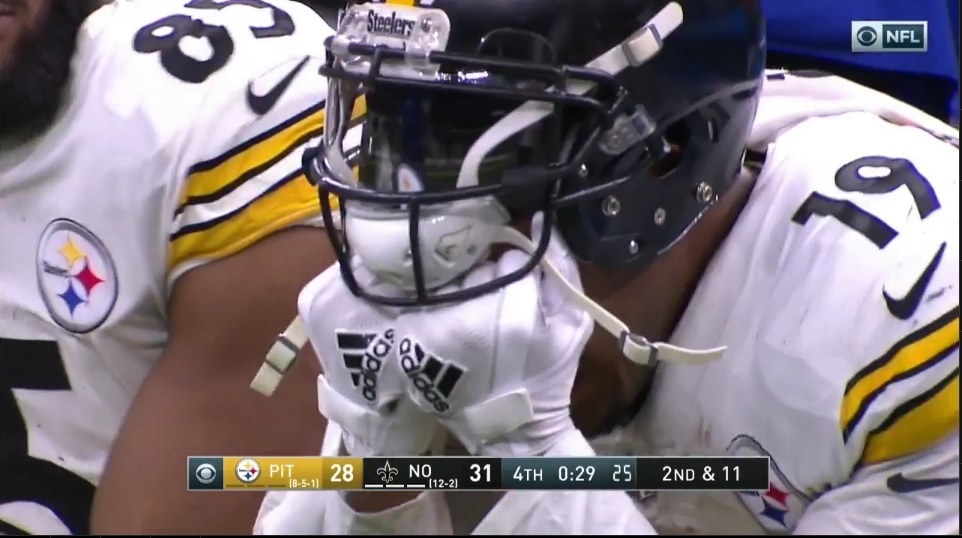 The officiating. The schedule. Injuries. Yes, they were all obstacles the last six weeks for the Pittsburgh Steelers. But the only people the Steelers have to blame are themselves.

Calling pass interference on Joe Haden Sunday evening was one of the worst calls you’ll ever see. There’s zero debate about that. Bad, terrible, awful, no-good call. You can point to other plays in Sunday’s loss as bad breaks.

But look at the big picture. The Steelers lost to Denver, blew a lead against Los Angeles, and then fell to Oakland. Oakland. Win any of those games and this loss isn’t the crushing blow that it is. It wouldn’t have been the prettiest way to waltz into the playoff race but still, solely a win over the hapless Cincinnati Bengals would’ve clinched the AFC North.

Now, the Steelers will need to root for the Cleveland Browns to play spoiler. Excuse me while I go throw up.

That’s the state Pittsburgh has put themselves in. No one else. Even Sunday, despite those horrendously bad calls, the Steelers had plenty of chances to win.

They had the ball with ten minutes left on the Saints 34, leading by four. Stevan Ridley fumbled.

They had the Saints pinned back on 3rd and 20, 1:41 left, still up by that same margin. New Orleans converted.

They had the ball in opposing territory, 45 seconds left, a chance to tie or even take the lead with a touchdown. JuJu Smith-Schuster coughed it up.

The only unquestionably bad call was the Haden pass interference. That came in the first quarter. Can’t use that to blame an entire loss. That locker room sure isn’t.

Again, none of this stings the way it does if Pittsburgh took care of business all the other chances they’ve had since November. Blaming the refs for a miserable second of the half of the season isn’t on the table. This is a Steelers team not capable of closing out games. It’ll happen in spurts, like New England a week ago, but not as consistently as it has in the past or needs to be. They’re 3-4 the back half of the year. From 2013 to 2017, they finished no worse than 6-2. The schedule was tougher this year sure, but again….Oakland.

Or think back to the beginning of the year. A tie to the Browns, blowing a fourth quarter lead that just doesn’t happen to this team. Digging themselves a 21-0 hole the following week to the Kansas City Chiefs or a Week Four offensive meltdown in the second half to Baltimore. This was not a hard AFC North to win. Ten wins was all it was going to take. With a pair of future Hall of Famers leading the way, Ben Roethlisberger and Antonio Brown, that should’ve been a layup. Instead, the Steelers turned it into a half court shot. So much more difficult than it needed to be.

The defense can’t force enough turnovers. The offense turns the ball over too much. Special teams runs more hot and cold than either of those units. Coaching problems exist across the board from the occasional eyebrow raising decision (Randy Fichtner) to the ones who make me sad on a near-weekly basis (Keith Butler).

Officiating is at fault here? Nah son. How can the fanbase blame officiating when half of them wants to fire Mike Tomlin? You gotta pick one or the other.

It’s fine to complain about one play from one game. It’s not fine to use that as the excuse for all the deep-seeded issues this team so clearly has.

If next week ends without a playoff berth, and that’s the way things are looking, when you think about this lost season in February or during the draft, or even right before the 2019 training camp opens, the refs won’t be what you discuss. It’ll be the flaws with this team. Lack of playmakers, lack of ball security, lack of ability to play in crucial moments.

Don’t blame the zebras. The people responsible for this failure are wearing Black and Gold.