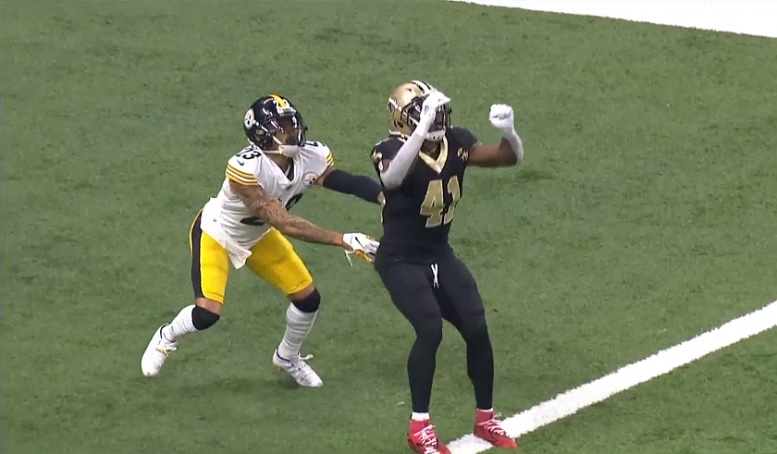 Pittsburgh Steelers cornerback Joe Haden didn’t have a great game in the team’s Sunday road loss to the New Orleans Saints as not only did he give up the go-ahead touchdown with 1:28 left in regulation time, he also was flagged twice during the contest for pass interference. While Haden had already talked immediately after the game about how he didn’t agree with those penalties being called against him, this year’s Steelers Chief Award winner openly discussed those two calls again on Wednesday during his talk with the media after receiving his prestigious award.

“No, I still feel like the one with [Alvin] Kamara was just a tough, tough call, bad call,” Haden said of the highly-questionable first quarter pass interference penalty he received in the end zone on a 4th and 1 play on Sunday in New Orleans. “But it is what it is. I feel like the other one on fourth down, I think it might have got tipped, but we’re playing physical within five [yards], I could see how they would say I got a little pull on him [Saints wide receiver Michael Thomas]. But you know, it’s just physical ball. So, I think the second one was more a shaky one, but the first one, I just don’t see it.”

During his Tuesday press conference, Steelers head coach Mike Tomlin said that while he didn’t think that the 4th and 2 pass from Saints quarterback Drew Brees to wide receiver Michael Thomas with two minutes left in the game was indeed tipped by defensive lineman Stephon Tuitt, he also added that he didn’t think that Haden committed pass interference on the play. All of that noted and as I have pointed out a few times already, Haden did appear to pull Thomas downward while the two were battling off the line of scrimmage. Additionally, Haden did appear to have his left arm wrapped around Thomas after the receiver had come out of his break and while the football was in the air.

As for the pass interference penalty that Haden received in the first quarter while covering Saints running back Alvin Kamara in the end zone, yes, that really was a bad call by the officials, in my opinion, and maybe the worst one against the Steelers all season.

Haden, however, had a great response on Wednesday when it comes to all he’s been through since Sunday’s game ended.

“I’m a true believer, everything happens for a reason,” Haden explained. “So, once you get through the emotion, I just needed a couple hours, 20 minutes, something, just to get myself together. But just knowing that everything happens for a reason, and that was one of the tougher ones, but just having my teammates with me making sure everybody knows, like, ‘Joe, come on man, we wouldn’t be here without you,’ their support helped out a lot.”

Haden is everything a Steelers fan could hope for both on and off the field and hopefully the 2018 season doesn’t come to end this coming Sunday for him and the rest of his teammates. He certainly has the right attitude heading into the team’s Sunday regular season finale against the Cincinnati Bengals, a game the Steelers must win if they want to give themselves a great shot at getting into the playoffs as the AFC North champions.

“Like we say, the main thing we can do is control what we can control because if we lose, then everything’s irrelevant,” Haden said Wednesday. “So, we’re hoping for the best, but at the end of the day controlling our business in front of us is the most important.”