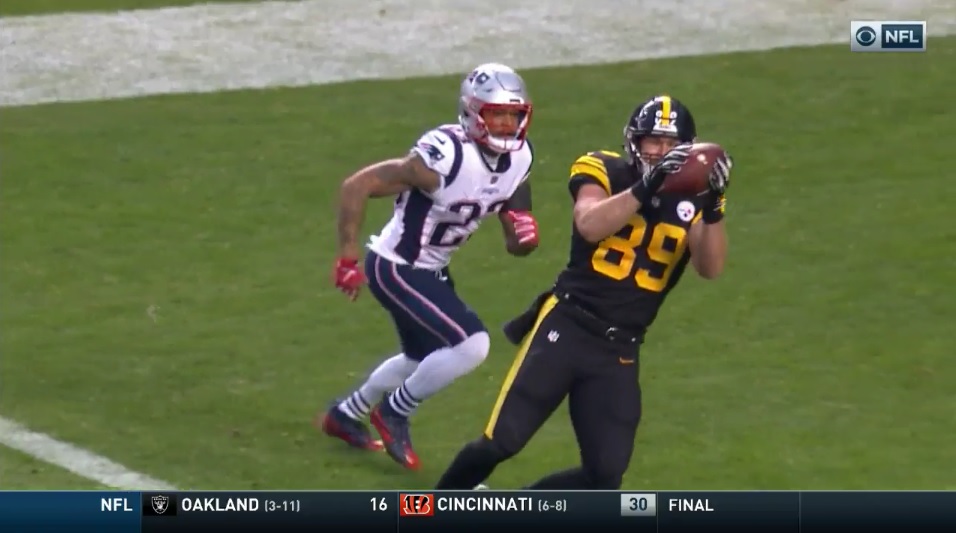 Vance McDonald finished the day with the second fewest yards of the season. On the surface, two catches for 13 yards is a far cry from a performance to remember. But McDonald made both of his plays in big moments to secure the win over the New England Patriots.

His first catch came on 3rd and goal on the Pittsburgh Steelers’ opening drive. Steelers are in an empty set, McDonald split out wide. He runs a “return” route, stemming outside like he’s running a speed out before changing directions and breaking to the middle of the field.

That shakes strong safety Patrick Chung and McDonald makes the grab, getting the Steelers on the board first. A nice change up from how things have started over the last month and a drive they needed to finish in the end zone, not with a field goal.

McDonald received only one other target until this next play. 3rd and 7 on the Steelers seven with six minutes left. If they don’t convert, the Patriots are almost assured of getting the ball with excellent field position. And their special teams unit just blocked a punt around the same yard line last week. So important to convert, obviously.

McDonald runs an out route, singled up again on Chung. Great throw to hit him out in front where only he can make the play. But McDonald still makes the grab and moves the sticks. That gets the drive going, playing ball control, ending with a field goal and giving New England limited time to try to tie things up. Ultimately, the clock worked against them.

Two of the biggest grabs of the game came from McDonald. I love they’ve committed to getting him involved in the red zone over the second half of the season. His size and athleticism makes him a headache for safeties like Chung, who isn’t known for his coverage ability.

And speaks to his focus to get involved early, disappear until late, but make the play when he’s needed most. A veteran move for a heck of a player. And a great trade by Kevin Colbert, who essentially moved down 20 picks to get him.