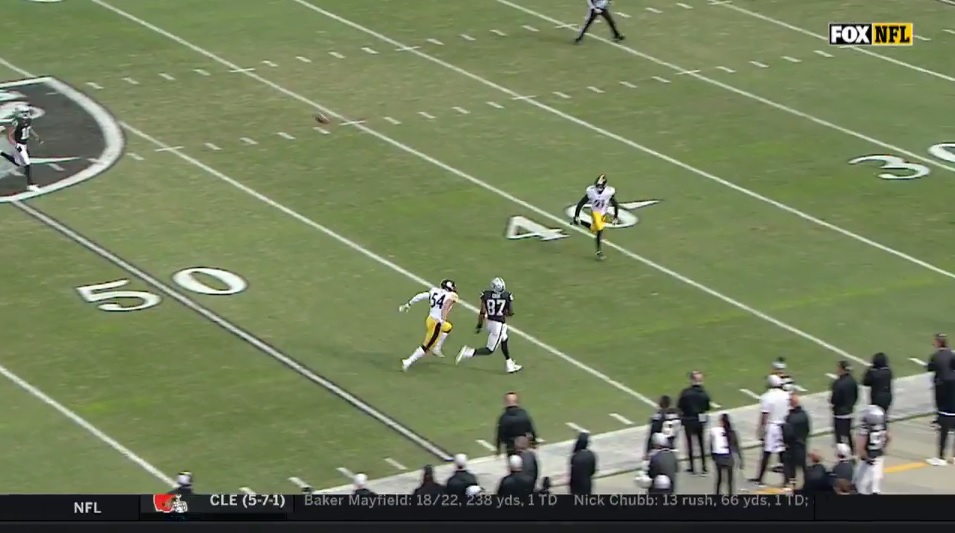 Mike Tomlin pointed to not having Morgan Burnett and Cam Sutton for the issues covering Keenan Allen. With those two back, there weren’t any excuses for “bad matchups” against the Oakland Raiders top weapon, tight end Jared Cook. And it’s true the Steelers were more flexible in what they tried to do to slow Cook down. Unfortunately, the other issue of this defense got exposed. A lack of talent to make plays when needed.

Keith Butler should get this much credit. He tried pretty much everything he could to prevent Cook, who caught seven passes for 116 yards, from making plays. And almost nothing worked.

The first matchup he got was L.J. Fort on the second play of the game. Fort is walked out on Cook, indicating man coverage, and the Steelers are playing Cover 1. Derek Carr knows he has one-on-one coverage and chucks it deep for Cook, who has a step on Fort and makes the grab.

Carr connects with Cook the next play. Jon Bostic plays this poorly, needing to keep inside leverage and wall Cook off but he seems to break on #3 running an out route, getting out of position and letting Cook cross his face. It’s a 19 yard gain.

How about a defensive back? Didn’t work either. Morgan Burnett struggled defending him. Man coverage on 3rd and 8. Cook runs an out route, Burnett is trailing, and he can’t close to make the play. Not the easiest play in the world, with inside leverage, it’s going to be tough to work across, but Burnett isn’t anywhere close to making the play. Oakland moves the sticks.

How about Terrell Edmunds? Not having much luck either. I know you guys argued this is offensive pass interference but tight ends are going to be physical and use their size/strength to win off the line of scrimmage. Just a fact of life, no use in complaining about it. Edmunds can’t jam him and Cook wins the route for another first down.

Mike Hilton? Less of a catch point issue and more of a communication breakdown. Burnett and Hilton and trying to coordinate how they’ll match the two routes coming out them by Cook and WR Seth Roberts, and Hilton is a little late taking Cook. Creates an easy throw and Cook turns upfield for another first down.

Ultimately, pretty much everyone on this defense, even Joe Haden, was matched up on Cook at some point. But pretty much no one had an answer to stop him. Only three of his seven targets fell incomplete. They were.

1. Stephon Tuitt deflecting a pass at the line of scrimmage
2. Cook dropping a pass
3. Burnett’s end zone breakup on 3rd and goal on the final drive, which could be argued was holding/pass interference

So if we’re being generous, they made one stop against him with the ball in the air. That’s their best player. Everyone knew the ball was going to him. Sean Davis said as much post-game.

“They were moving them around. Eighty-seven, that’s their leading receiver man, and we knew that going into the game. We knew whoever was on top of eighty-seven was in the hot seat. We didn’t make enough plays and that starts on Wednesday because as a unit we’re not good enough to just come out on Sundays and show up when it’s time to make a play.”

The last two weeks sum up how I’ve felt about the defense all year long. Against the Los Angeles Chargers, it was Keith Butler’s poor gameplan that didn’t put his players in position to win. Coaching didn’t overcome the talent. Butler had a better gameplan last week but the issue fell on the players. And the decencies there, at linebacker and in the secondary, couldn’t mesh with coaching.

That’s why, for lack of a better word, you need a rebuild this offseason. Help at inside linebacker, cornerback, dime linebacker, probably outside linebacker. And likely defensive coordinator, though I’ll wait until the season ends to give my full and final thoughts there.