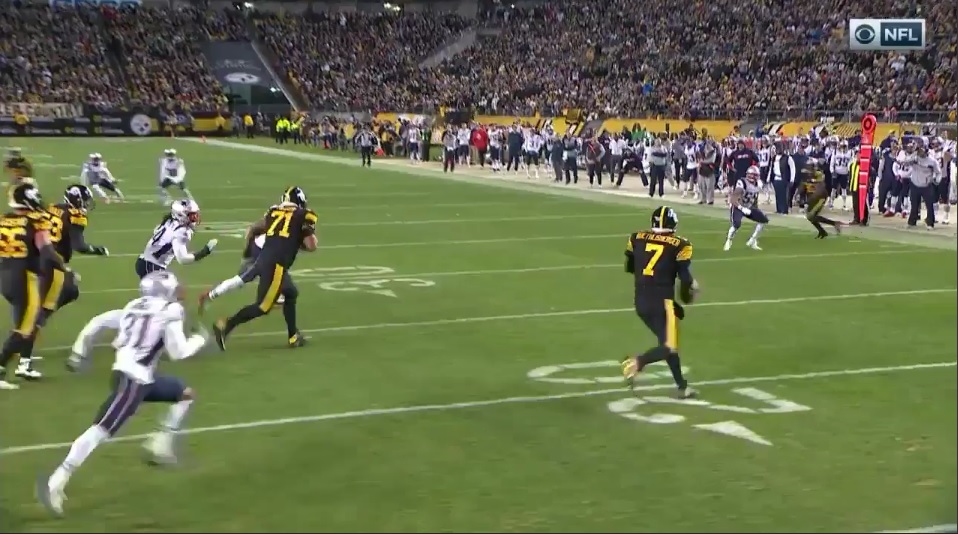 Everyone has a plan til they get punched in the mouth. Any quarterback can look like a star if his first read is open. Any offensive line can keep their quarterback upright if the ball comes out quick. The trust test of both is when things break down. The play doesn’t work like it does in the playbook, during practice, or Friday’s walkthrough. When a meticulous, structured play turns into backyard football. Keep the play alive, find someone open.

Five of Ben Roethlisberger’s 22 completions Sunday came of scramble drills. The first read wasn’t open so Roethlisberger, the line, or both had to keep things going and work something out. That’s what we’re looking at today.

The first came on the Steelers opening drive. Roethlisberger’s first read isn’t there and he’s forced to come across the field. There’s pressure, the Patriots are running a stunt and #93 subtly holds David DeCastro so he can’t pick it up. But Roethlisberger has the mobility to flush to his right, keeping his eyes downfield, ans Antonio Brown runs away from Stephon Gilmore. It’s a seven yard gain, avoiding a 3rd and 10 that could’ve killed the drive before it began.

This time, it’s all on the offensive line. Roethlisberger able to work across the field, go through all his reads, while the line blocks it up. JuJu Smith-Schuster works back to the football and makes the grab. You see the line’s ability to communicate and pick up stunts here, too. They’re among the league’s best in that department.

This one takes plenty of time to develop too. James Washington is the man who gets open, running away from Gilmore and getting into Roethlisberger’s vision. Nice snag over the middle. It’s nearly 3.5 seconds from snap to throw, well above the NFL average of 2.5. Alejandro Villenueva and Ramon Foster provide two key blocks here.

This one was the definition of a mess. Playaction with the first read supposed to be down the right seam. Jesse James and Roosevelt Nix collide and fall down off the snap. Roethlisberger improvises, stepping up from pressure, and keeps his eyes downfield with his options open. Could dump it off to Stevan Ridley, could run it (though that’s not a great idea) but he’s able to find Antonio Brown breaking over the middle for a 24 yard gain.

Many quarterbacks are just checking it down or throwing it away. Not Ben.

Finally, one of the game’s biggest plays. 3rd and 9 on their final full offensive drive. The line gives Ben a whopping 6.5 seconds from snap to throw. Roethlisberger goes through every read, he has all day to read the field, rolls to his right, and then finds Samuels down the right sideline.

It’s really difficult for the line to still block when the QB escapes the pocket. You don’t have vision on the quarterback, the defense does, so they react first, and you don’t want to get called for holding. But kudos to Matt Feiler especially here, for pushing back Kyle Van Noy (#53) and giving Roethlisberger that extra half-second.

You guys already know how well the team has performed in these situations. And that’s how young guys, like Samuels and Washington, each catching a pass here, find out pretty quick about “Ben ball.” How to never quit on the play because either the quarterback or the line will make something special happen.