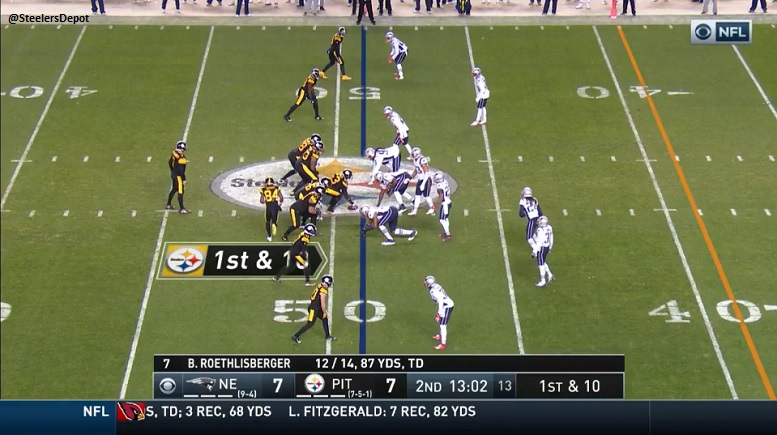 The Pittsburgh Steelers had wide receiver Eli Rogers back on the field for the first time this season in Sunday’s home game against the New England Patriots and not only that, the decision was made to dress all six wide receivers on the team’s 53-man roster as well. The Steelers offense even utilized five of those six wide receivers quite a bit during the game and shockingly even ran 14 plays with Rogers, Antonio Brown, JuJu Smith-Schuster, James Washington and Ryan Switzer all on the field at the same time.

Steelers quarterback Ben Roethlisberger talked about the heavy usage and advantages associated with five-receiver groupings in that game on Wednesday during his talk with the media.

“It gives us a lot of weapons,” said Roethlisberger. “We’re limited in some of the things we can do. It creates some mismatch opportunities and then it’s just about finding the right mismatch or the right opportunity that is available to us.”

Roethlisberger also revealed on Wednesday the conversations that took place with offensive coordinator Randy Fichtner last week that led to the decision to run an extensive amount of plays with five wide receivers on the field at the same time against the Patriots.

“Randy asked if we wanted to do it and I said sure,” said Roethlisberger. “It creates mismatches. There are opportunities for different guys, we can move them around and put them in different spots. It puts a lot on them to know when I do move them around what they are supposed to run. I may just call a concept and they need to know what they are supposed to do. It puts a little more on them, but they executed really, really well.”

Execute well they did. In fact, most of those five-receiver plays the Steelers ran on Sunday against the Patriots came in the first half and in the 8 play, 92-yard scoring drive that culminated with Roethlisberger connecting with Brown from 17 yards out for a touchdown.

Roethlisberger was 7 of 8 passing on that drive with five wide receivers on the field. Rogers even drew a big 26-yard pass interference penalty during that drive down the right sideline.

While the Steelers offense did have success running those five-receiver plays on Sunday against the Patriots, Roethlisberger talked some on Wednesday about the drawbacks that come with such a unique personnel grouping.

Ahead of Sunday’s game against the Patriots, you probably need to go all the way back to the 2011 regular season to find the last time Roethlisberger used so many five-receiver packages on offense. Because of the success the offense had on Sunday against the Patriots defense at home, it will now be interesting to see if such a grouping is used much, if any, on the road this coming Sunday against the New Orleans Saints ad especially with it likely to be hard to communicate in the Mercedes-Benz Superdome due to crowd noise.

With that topic in mind, Roethlisberger was asked during his Tuesday morning interview on 93.7 The Fan if there’s anything that can be done in practice this week to help Steelers offense replicate what it will be like to play in New Orleans on Sunday.

“Not talk, really,” Roethlisberger said. “I mean on Fridays we put speakers out there for a modified crowd noise, but sometimes the best thing to do is to not even talk. Just always look out to the wide receivers and just do hand signals, or things like that. So, that’s about the only way you can stimulate something that’s that loud.”