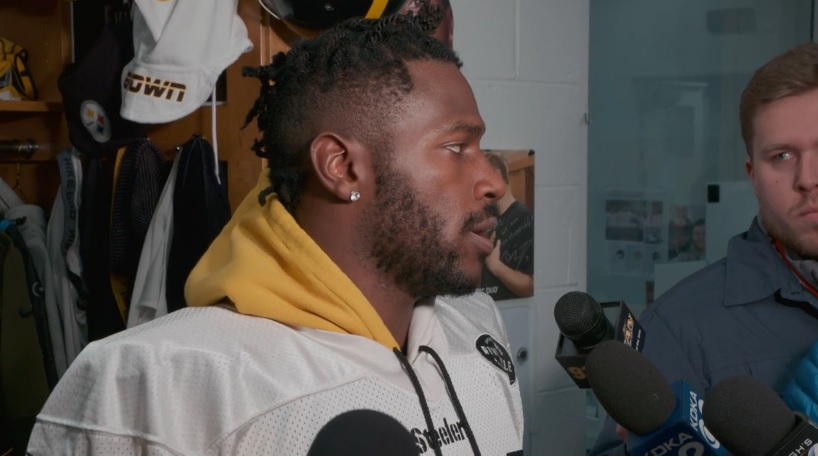 Yes, the Pittsburgh Steelers have lost two games in a row. Yes, there’s some injuries, notably without James Conner this Sunday as they travel to take on the Oakland Raiders.

But no, it’s not an excuse. Not to Antonio Brown, at least.

Brown pushed back on the notion that injuries and location could hold this offense back.

“We’re looking forward to the opportunity to play football,” Brown told the media Friday. “We can’t make any excuses of where we’re at. Right now, at this point, we should be able to play football anywhere, any time, wherever it is.”

Despite this really being a “must win” game for the Steelers, to stop the losing streak and the implications of what a loss to the 2-10 Raiders would mean, Brown doesn’t carry any added pressure going into the game. For him, the pressure is the same every week.

Brown seemed confident in the Steelers’ ability to bounce back, telling reporters the team was going to be “alright.”

AB is coming off his best statistical game of the year in the loss to Los Angeles, tallying 10 receptions, 154 yards, and a touchdown. That gives him 12 touchdowns on the year, one shy of his career high set in 2014. Even if it feels like a “down” year, JuJu Smith-Schuster still leads the Steelers in receptions and yards, Brown is still on pace for 108 receptions for nearly 1400 yards. That’s a career year for all but a handful of receivers in the game.

He could top those numbers this weekend. The run game is without Conner and the Raiders have one of the league’s worst pass defenses. No team is giving up more yards per reception or passing TDs than Oakland. Last Sunday, the Chiefs Travis Kelce torched them for 12 receptions, 168 yards, and two scores. Patrick Mahomes tossed four touchdowns and wasn’t sacked.