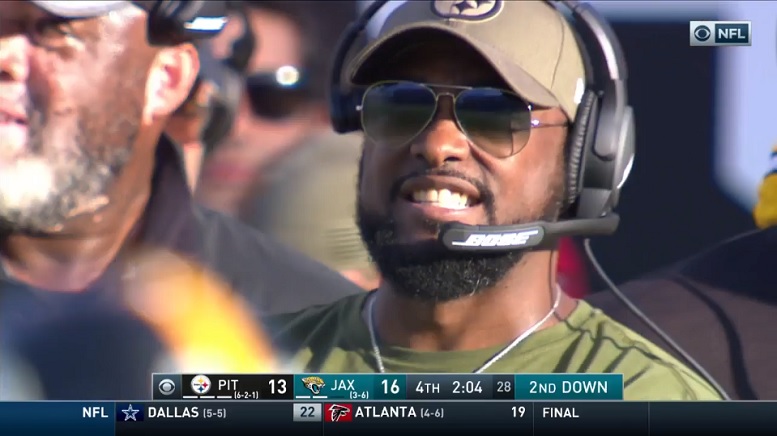 During the Pittsburgh Steelers Sunday road win against the Jacksonville Jaguars, head coach Mike Tomlin made a few curious in-game decisions and especially during the second half. While Tomlin wasn’t asked to explain his decision-making process to those curious Sunday in-game choices during his post-game press conference, he was asked about them on Tuesday when he once again met the media.

For starters, Tomlin once again let it be known that he’s not afraid to go against what the consensus choice might be in certain in-game situations related to the usage of team timeouts late in halves and whether he should accept or decline certain penalties on particular down and distances.

One of the curious decisions that Tomlin made during the second half of Sunday’s win against the Jaguars came with around 12 minutes left in the third quarter with the Steelers trailing 9-0. After a third down and 2 run by Jaguars running back Leonard Fournette from the Jacksonville 34-yard-line, right tackle Jermey Parnell was flagged for holding following gain of just one yard. Instead of declining the penalty and forcing a fourth and 1 situation, Tomlin chose to accept the penalty to force the Jaguars offense into a third and long situation.

That decision by Tomlin ultimately paid off as Steelers outside linebacker T.J. Watt strip-sacked Jaguars quarterback Blake Bortles on that third down and long play. While Parnell did recover the loose football, the Jaguars were then forced to punt from their own 13-yard-line and the Steelers offense started their next possession at their own 45-yard-line, their best starting field position of the game.

“In regards to the acceptance of the penalty, I wanted to see why they avoided third and long so hard in that football game,” Tomlin said Tuesday. “I’m just joking, I knew why they were avoiding third and long, that’s why I took the penalty and you see what happened when they snapped that ball. That team was working extremely hard to stay on schedule. We needed splash plays to provide our offense potentially the short field in an effort to win the game. We weren’t going to get splash plays on third and 2, so you move them back to third and 10 and you get after them and maybe you sack fumble them, maybe your pick it. That’s how the game goes, I’m not apologizing for that.”

Later in the game with the Steelers trailing the Jaguars 16-13, Tomlin decided not to use the first of the team’s three remaining timeouts following a first and 10 run for 4 yards by Fournette with 2:22 left on the clock. Instead, Tomlin chose to let the final 16 or so seconds tick off the game clock before the two-minute warning was issued. On Tuesday, he didn’t apologize for that clock management decision as part of him explaining why he chose not to use his first of three remaining timeouts ahead of the two-minute warning.

“So, just thought processes. Again, I understand that minutia, understand how what we do is evaluated in today’s ball. There’s too many talk shows and things of that nature not to analyze it in that way, but I do not care. I’m trying to win. A year ago, we were in a shootout [with the Jaguars], I onside kicked them. This time around we weren’t in a shootout, I kicked it deep. I look at what I do in stadiums to win and I’m going to aggressively pursue victory for this football team.”

Tomlin will more than likely never be a by-the-book kind of coach when it comes to in-game decisions and particularly ones related to clock management. While that’s fine being as he is the one in charge of making those decisions, it still won’t result in him not being highly second-guessed moving forward by a large section of the media, bloggers and fans should one of those against-the-grain choices wind up costing the team a win. Even so, Tomlin still won’t care either way moving forward as he’s very comfortable in his aggressive skin that surrounds a gut that’s not afraid to make unpopular choices.